QUEENSLAND police plan to send drones into the skies for bikie and anti-terror surveillance ahead of the G20 conference in Brisbane. 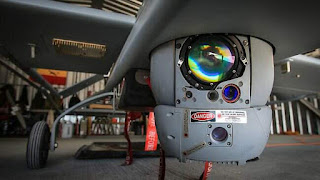 The Courier-Mail can reveal Police Minister Jack Dempsey wants the aircraft, possibly second-hand ex-military drones used in Afghanistan, in time for the trans-national G20 conference in November next year.

But the plans have angered privacy advocates, with the head of the Australian Council for Civil Liberties saying they amount to "Big Brother in the sky".

Mr Dempsey said drones would be a "cost-effective" measure in police aerial intelligence, with an hourly operating fuel price-tag of $30 compared to $500 per hour for a helicopter.

"Originally even basic drones cost upwards of a million dollars but today they can be purchased for as little as $50,000 and the price continues to fall," Mr Dempsey said.

"Furthermore, with many countries continuing their withdrawal from various theatres of war we may see their high-end surplus military drones come on to the market at very low prices.

"I believe if the business case for drones stacks up they'd be invaluable for a range of policing tasks, including traffic management, covert drug crop identification and even surveillance for events such as the 2014 G20 meeting and reconnaissance during outlaw biker runs.

"Additionally there are many emergency applications such as being used for spotting bushfires for the Rural Fire Service and providing real-time aerial intelligence from flood or cyclone affected areas."

Mr Dempsey said helicopters and fixed-wing aircraft were useful "when it comes to search and rescue activities".
"But of course they are limited by fuel capacity and fuel availability in remote areas," he said.

"With some drones able to fly and hover for days and weeks on end, we'd be able to keep a single aircraft up for much longer while beaming back real-time video which, together with traditional aircraft, would complement most search and rescue activities."

In the US the Pentagon has splurged on drones, reportedly increasing the number to 7000 compared to about 50 a decade ago.

However, the government is currently locked in a fierce political debate on how they are used and associated privacy concerns.

In Australia, 34 organisations are certified to use drones for activities including aerial photography, surveying and power line inspection.

Australian Council for Civil Liberties president Terry O'Gorman said giving police access to drone technology was a "huge boost" to their powers and shouldn't be done without legislation and parliamentary debate.

"There is a real concern about the eye in the sky, the flying Big Brother who can see everything and anything, in the hands of police," he said. "Bikies are just the selling point, it will be used across the board."

He said using drones to monitor public protests was unjustified and could make people afraid of expressing themselves publicly.

Another way to monitor the masses at every single step, under the best pretext on the planet ... 'terrorism', before it was ... 'communism'.