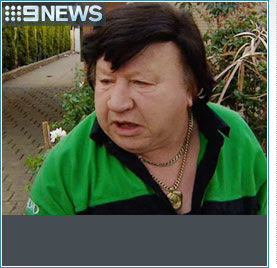 A wild teen party advertised on MySpace has this morning spilled over into an angry confrontation between residents in Melbourne's southwest, with the father of the party's host threatening to break a neighbour's neck.

Lori McLean, a 30-year resident of Werribee, marched up to the party house this morning and accused the teen host's father of turning the local community "feral".

"We have a wonderful town here," an emotional Mrs McLean, flanked by media, told Imerio Marangoni when he answered the door.

"I don't want your kids coming here and being feral in this area, I'll tell you now," the 68-year-old resident said, wagging her finger at Mr Marangoni, who is father to 18-year-old party host Mark.

"No, you piss off," she screamed back.

Mrs McLean said she was not surprised by the reception she received.

"That's the attitude of the parents, that's what they're like," she said, appearing to hold back tears.

"I'm very upset … I love this town and I'm not going to see those people destroy it."

Last night, police were forced to take cover as up to 100 drunken teenagers pelted them with rocks and bottles when they tried to break up a wild party advertised on social networking website MySpace.

Mr Marangoni blames the police for starting the trouble but said there would be no more parties at his house in Melbourne's south-west.

Four youths were arrested and more arrests may follow after the drunken teenage party spilled into Jika Court, Werribee, about 11.30pm (AEDT).

Mark Marangoni's Myspace message read, in part, "First 100 girls and first 100 guys get in ONLY. People who come in big groups wont (sic) get in, as space will get filled up quickly. There will be security at the door $5 entry fee due to damages from previous parties".

One of the first police on the scene, Werribee Acting Sergeant Jane Boyd, said police were called to break up a fight.

The youths hurled missiles when police ordered the rowdy gathering to shut down, she said.

"They got into a large group at the end of the court and started throwing rocks and bottles," she told AAP.

A divisional van was dented as the two police units came under attack.

It was five long minutes before back-up arrived, she said.

"It was frightening, and because it's so dark you don't see the missiles being thrown at you from the shadows," she said.

At least five more police cars, assisted by a dog squad unit and the police helicopter, took more than half an hour to regain control of Jika Court and several neighbouring streets.

"There was a tyre iron and a pitchfork and bricks. I just saw stuff going everywhere," she told AAP.

"I was just hiding in my garden trying to tell some of the kids to go home, telling them to nicely go away."

With bank notes visible in his short pocket, Mark's father, Imerio Marangoni, 73, said people aged between 14 and 18 had paid to attend the party.

He said Mark was "upset" and had left the house on foot and blamed police for provoking party-goers.

"They come in, tell people to piss off but they were at the party to enjoy. It's (a) disaster."

"Two hundred people, all young, you can't control them when they drink." But he said Mark, who normally lives with his mother, would not host another party at his house.

Mark's younger brother Matteo, 16, was ordered by police to clean up the debris in the street.

Too much emphasis is put on by the media into menial stories with no significance.

It detracts the focus from much more important events in society.

The media glorifies 'party losers' as the in-thing.

Stories like this are entertained in this blog for PURE COMIC RELIEF.

(Note in illustration the 'skunk' on the TpT dweller.)

Which Bank? The Commonwealth As the name implies, a bank for everyone? a bank for the commoners? a bank owned by the state / government? In actual fact, the name cannot be further from reality, a fact deliberately omitted by the ACCC as FALSE ADVERTISING.

Each branch of the Commonwealth Bank is privately owned, i.e an Autonomous business, which is 50% owned by the bank's branch director, a fact NOT publicly mentioned.

A few years ago, consumers were angry at branches closing, in the remote Outback, in areas deemed by the director, as non profitable, as it was NOT about providing a service for the people, as previously named banks (e.g State Bank) suggested, but about profiteering.

Naturally, as with ALL private businesses, it is susceptible to 'bankruptcy', a trend that will emerge later.

In accordance with governmental policies to 'not educate the peasants', another statistic will be added to the list.

What is the norm is that schools for the 'peasants' are demolished, and taken over by corporate enterprise in what can only be described as 'money for mates' deals.

In its current infancy, the plan is to shut down Victoria University's Sunbury Campus.

In order to achieve this it must be shown that the University is not profitable. The directive has been given to the decision makers at the University (names are with held to protect the guilty) to 'shut down' courses, and limit availability to the students, thus not enticing them to study there.

A report will be then produced that will show (justify) financial reasons to close the University due to lack of students, thus mission accomplished.