Commercial Lien How well did it go for you?

Maybe some Corinthian once said something along the lines of ;

"Just because you can, doesn't mean you should",
where with regards to many people, breeding comes to mind first and foremost.

Some people have read about an apparent silver bullet called a Commercial Lien, which they may think is justifiable especially when the authorities have hindered a "free-man".

So, quoting some 'Common Law' let's look at a fella's success with regards to his "Commercial Lien" as seen from within paragraph 58 as shown in illustration below;

It's really really refreshing to know that law gurus communicate with mere mortals on the interwebs, where they share their out of mind experience, as shown in example below:


How well did this fella go with his "Commercial Lien"?

Note to self:
Always a good idea, in the "remedy" section, to put in a few e.g. 10,000 troy ounces (over a quarter of a tonne) of not just pure silver but 'betterer' to use gold.

Posted by AuCorp at 4:32 PM No comments:

Australian Constitution gives us the right to bear arms

The Australian Constitution, a 116 year old law, that has made its way into the hands of the herd population and literally immortalised itself in pop culture ever since the dual citizenship saga hit the mainstream media.

Ever since then any serf may reckon they're a "Constitutional Lawyer" where the worst part about it is that they have a voice on social media that can lead other members of the herd population off a cliff, as depicted below.

A 'luser' (pronounced loser, with reference to a loser user) by the name of Lyn Bennetts stated;

"Australia's Constution also gives us the right to bear arms, it doesn't matter if you like it or not it is our right"

WHILE referring to ... wait for it .... the
"2nd Amendment to the Constitution of the United States of America"

as shown in the screen capture below: 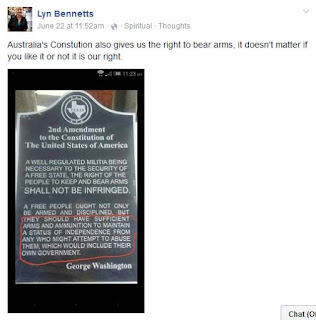 Now, for the record, we ain't no "Constitutional Lawyer" (LOL, PMSL, etc, etc),
but can someone PLEASE tell us where does it say that the serfs have to right to firearms in the
Commonwealth of Australia Constitution Act 1900 ??? !!! ???

The document is available for your perusal below:

Note to self:
The Constitution is a document that people in government must follow,
therefore there is no reference (and never was any) as to the serfs bearing arms.

Australian Government oppressing the people with regards to technology

It seems that the administration of the colony called Australia really hate their (tax) slave population where the sheeple are not allowed new technology that is available elsewhere.

Why would there be such an oppressive policy against the convict population?

It's not as if they are going to build a computer controlled rocket and blow up parliament house in the nation's capital, as it already has a fence (with other high tech surveillance) around it to keep the herd out.

Apparently a policy exists, where the serfs have no access to it(?), with regards to restricting new technology being imported into Australia.

We're not talking about the latest and greatest Android slab (phone) which is a great self sponsored government / corporate surveillance tool, as they're all for that, it's about the 'other' technology that is available to other inhabitants of even less fortunate nations than the people of Australia.

How Australians are beating tech restrictions, importing the best gadgets not available Down Under 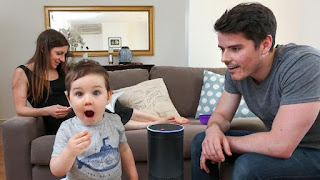 Liam, 20 months old, tries an Amazon Echo device with his parents. The device is one of many Australians cannot buy locally. Picture: Ian CurrieSource:News Corp Australia

PLANES cross the Pacific Ocean every single day, and the world has never seemed smaller or easier to access.

Despite this, some of the best technological creations still don’t reach as far as Australia, and many don’t arrive in stores for months after their worldwide release.

These failures to launch affect everything from smartphones to computers, cameras to virtual reality gaming equipment, with notable holdouts including Google Glass, Amazon Echo smart speakers, and the much-hyped Essential smartphone that can still only be ordered in the United States and Canada. 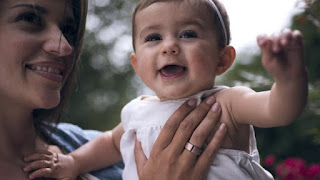 The Motiv smart ring (pictured) tracks the wearer's activity and sleep, is waterproof, and promises a five-day battery life. It’s not available in Australia.Source:Supplied

A group of canny Australian expats are helping gadget obsessives to cheat the system, however, and they’re gearing up for America’s biggest sales late this month.

Phillis Chan is one such entrepreneur, and established the export firm Big Apple Buddy after moving to New York with her husband two years ago.

It’s a business she fell into, she says, after being inundated with purchasing demands from friends Down Under.

“When we came over here, a lot of our friends and family members started asking us to send goods back to Australia because they couldn’t actually buy them,” she says.

“We were sending back tech products, fashion goods, sending out things like snowboards and ski gear.

“We thought there must be other people around the world who want access to these goods but don’t have a contact in the States, and that’s how the business came about.”

Big Apple Buddy now operates at a Manhattan address where goods arrive and are shipped to customers the same day. 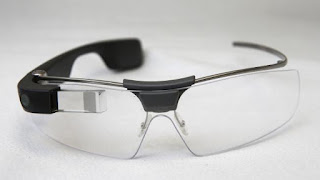 The business offers its services to over 150 countries, but Chan says most customers are Australian and most order hard-to-get gadgets.

“As much as we have access to designer fashion brands, tech is our main focus,” she says.

“The two main categories at the moment are VR headsets and smart home products, especially with the release of Amazon items recently.”

Some products are bound to be popular with Australian buyers, she says, but other requests still surprise her. “We have a big customer database so we have a lot of people coming back and saying ‘I just saw this thing on a tech blog, can you help me get it?’”

Other Australians offering a similar service include Dr Carolina Tillett at Price USA, and both compete with worldwide parcel-forwarding services including Shipito, HopShopGo, and Australia Post’s ShopMate service.

But Chan says parcel-forwarding doesn’t always work for Australian buyers, as an increasing number of US stores are blocking their addresses due to fraud issues, and some use less than optimal delivery services.

All American sales services are likely to get busy this month, however, as Black Friday sales are held on November 24, followed by Cyber Monday on November 27.

Despite the attention paid to both dates, Chan says they signal just the start of the discount season that runs for weeks and bleeds into Christmas, when shipping times take on even more importance.

“That whole period is very, very busy for us,” she says.