Divorce in the western world is a very tricky legal procedure.

In certain states of the US if you are married under 10 years, the man gets to keep what he had prior to marriage (really beneficial for 'power' couples) and so does the woman without interfering into each other's purse, after that it's 50/50.

In the 'lucky country' of Australia, you get the pleasure of dealing with lawyers who hack into your estate where they can get most of its value via a legal form of theft called the "legal system", which then can use the proceedings of the sale of your home to pay for their children's vacation in France.

Over 2000 years ago we are told that Jesus recognised the problems with lawyers via Luke 11:46 or 11:52 where it was apparently said;

"Woe to you experts in the law, because you have taken away the key to knowledge. You yourselves have not entered, and you have hindered those who were entering."

Approximately 600 years later Muhammad was of a similar train of thought, cutting out the 'middleman' and going straight to the source for divorce, allowing for the man to divorce his wives via text, fax email, Facebook or an app like Whatsapp.

It is done by a 'triple talaq', meaning all you have to do is say (don't forget text, fax, email, or via an app) "talaq" three times and you can call that woman your ex wife.

That can also be used a lesson to the other three to clean up the dishes a bit more thoroughly after you eat.

Apparently some Muslim men get really cranky and just can't be bothered with all that technology and just murder their wife.

Read the theage.com.au scribe's words from the 13th day of the fifth month of year of our Lord, two thousand and sixteen under the headline of:

Delhi: Five of India's most senior judges have started a hearing which could end up being a watershed in the way Muslim men relate to their wives.

Muslim men in India are allowed to divorce through "triple talaq" – a custom that involves saying the word talaq three times in succession. The divorce is instant and unilateral. 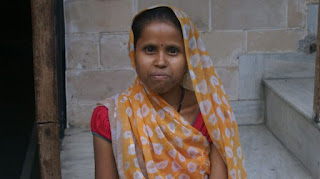 Rubina Amin's husband divorced her, declaring she was no longer attractive to him. Photo: Amrit Dhillon
It can be done by text, fax, email, Facebook or Whatsapp. The provocation can be trivial, such as putting on weight, greying or burning the dinner. Last month, the husband of national level netball champion, Shumayala Javed, divorced her by uttering talaq because she gave birth to a baby girl.

Given the sensitivity of the subject - the right to practise one's religion vs a woman's human rights as guaranteed under the Indian constitution - the five Supreme Court judges have been chosen carefully. Each one comes from a different faith: a Muslim, Hindu, Christian, Parsi and Sikh.

The hearing began on Thursday in response to several petitions filed by Muslim women challenging the practice. Instead of ruling on each individual petition, the Supreme Court decided to rule on the intrinsic legality of triple talaq.

No one knows how many Muslim men use triple talaq – it is very far from being the norm – but stories have increasingly appeared in recent years of women whose lives have been destroyed by this arbitrary and cruel way of ending a marriage.

The Bharatiya Muslim Mahila Andolan, a Muslim women's rights group which started the campaign to abolish the practice, said in 2015 that more than three quarters of the women who contacted it for help had been divorced in this way. 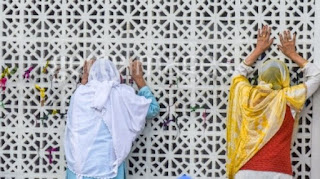 Muslim woman pray at the Hazratbal Shrine in Srinagar, Kashmir. Photo: Getty Images
Many are left penniless and destitute, raising children with no support from their former husbands.
Apart from Muslim women's groups and individual women protesting against triple talaq, the public mood in favour of banning it has been growing over the past year. The ruling Bharatiya Janata Party has said that this sword that hangs over a Muslim woman's head every day should go. 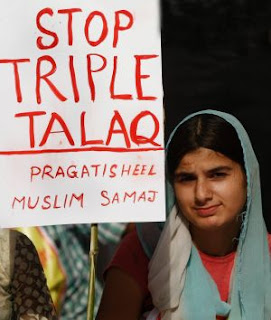 To stop the aggrieved Muslim women succeeding with their petition, conservative Muslim religious organisations have filed their own petitions defending triple talaq as permitted under sharia, a claim disputed by many female experts on the Koran.

"It is a totally un-Koranic practice. It is an expression of patriarchy, not religion,'" said Noor Jehan, co-convener of the Andolan. "It is sanctioned not by scripture but by custom, and customs can be reformed."

A government committee set up in 2013 to look into women's status published a report in 2015 recommending a ban. It said the custom "makes wives extremely vulnerable and insecure regarding their marital status".


By March, more than a million Muslims from across India had signed a petition supporting a ban.
But an influential organisation, the All India Muslim Personal Law Board, opposes the abolition of the instant divorce. In its petition to the Supreme Court, the Board argues that if Muslim men are denied triple talaq, they might murder their wives to get rid of them.

Implying that triple talaq was good for women, the Board said that if a man had to face the hassle of time-consuming and expensive legal proceedings to divorce his wife, "he may resort to illegal, criminal ways of murdering or burning her alive".

However, as the debate has intensified, some Muslim religious figures have come out in support of a ban, saying triple talaq is an aberration and it is time for the Muslim community itself to start reform by issuing divorce guidelines that protect women's rights.

Posted by AuCorp at 6:47 PM No comments:

NBN to be compulsory for all Australians? 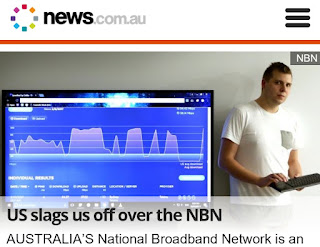 It's very clear to most 'netizens' of the world that Australian Government's implementation for internet called NBN across this colony is a huge joke (albeit at the good people's expense).

As of 2015 Australia was ranked 44th in the world, whereas in 2016 the rating slipped to 50th. The not so technologically advanced country of Kenya even score higher than the apparent first world country called Australia.

Although reports are not confirmed Eskimos and Gypsies are almost dying from laughter at our internet speeds, where they reckon they can pirate movies quicker than the original nation of pirates.

So we heard a rumour over the ether, the grape vine, or more specifically the ethernet cable that the NBN is going to become mandatory for the good people of Australia.

How this will happen is that once your current internet connection with whatever service provider you have gets disconnected you will have a choice to connect to the NBN or not.

In other words a 'customer' in Australia will have no choice.

The so called 'leaders' in government are responsible for the technology and laws put in place to make these things happen.

It sure does make this place more of a corporatised prison (for the general population), and a place what we call a corporate criminal's paradise, a place where (supported) people committing fraud in the hundreds of millions do not see any jail time, especially if it's against the public's purse.

Realistically the people involved in this project should be up for criminal charges.

Remember the government propaganda slogan: "Australia, the lucky country"
(They never did tell you for who..)

Riding on the back of Australia's budget where the people are the real losers here, there was something called the "good ol' days"

The Jews were making the people suffer really bad, with the practice of usury.

Usury is when you lend money at an unreasonably high interest rate, a bit like what Cash Converters and certain credit card companies are doing.

as seen in embedded pdf below

Australians are tax slaves to the banks

Without going into the big words of economics, finance and the budget, to make it easy for the commoner, the Aussie bogan, the deadbeat footy fanatic;

"Let's f_ck our customers over and let them pay for it.... hahahha"
(or something maybe a bit more eloquently put). 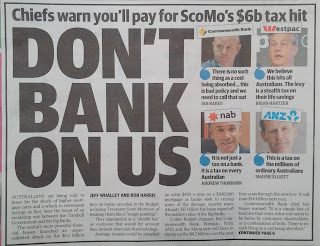 as everything will be fine.

With YOUR inaction you are telling them you enjoy being their slave (paying taxes / operational expenses / levies) for their HUGE profits, and CEO's salaries.

P.S. Don't forget you're a 'free man' living in a democracy.

Posted by AuCorp at 4:56 PM No comments:

Sheriff's warrants do not exist - verified on video

People should be made aware that warrants that have been allegedly issued from the progression of a fine from the so called 'Infringements Court' in Victoria do not exist.

They have never existed.

This information, with verified proof, sits within a few other people's personal archives that we are aware of.

Currently an alleged officer of the Supreme Court of Victoria, of the title 'Sheriff' is a man with the name Brendan Facey.

The Sheriff's Office of Victoria, with Brendan Facey at the 'helm',  has been committing fraud on the good motorists of Victoria without any consequences.

If you have been harmed by the Sheriff's Office of Victoria seeing this video could be of benefit to you should you choose to seek a remedy.

Please also note that there is considerable information, approximately a dozen posts, on the alleged Sheriff Brendan Facey, and the Sheriff's Office of Victoria contained within this (the Corporate Australia) blog.

We do not recommend anyone pay any monies unless a warrant in the proper format is obtained, in accordance with the law.

Quite simply put the business known as Queensland Police Service (QPS, ABN 29 409 225 509) has been caught out falsifying crime statistics.

The Queensland police also have even been threatening, beating, 'soliciting' people to withdraw their complaints. 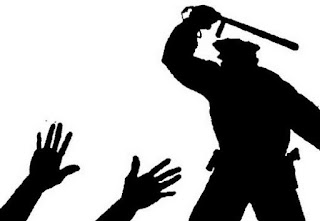 The report is available for download from the Corporate Australia blog archive at:

Posted by AuCorp at 8:58 PM No comments: