Why governments & corporations want you to use smartphones, apps


The smartphone app industry is a huge data collection business, with no real benefits to the product (i.e. the 'user').

Realistically it functions against the privacy and security of the user (and even non smartphone user), the industry should be disassembled, where this will not be the case, ever, as the industry has too much 'support' from government and businesses alike.

Apps should be 'open source' in order to independent researchers to verify that the app does not contain any malicious code, detrimental to privacy and security of the user's data within the smartphone.

"Nothing to hide, nothing to fear", argument fail by the government.

The 'Australian Government' released an app for the purpose of Coronavirus tracking among its people, where it was stated that the source code will be released in two weeks.

Why not the moment the app was published in the respective app stores?

What needs to be modified within the code before it becomes public knowledge?

Smartphone and semiconductor manufacturers install malicious code within the hardware to the detriment of the user WITHOUT 'full disclosure'.

Deceitful and dishonest conduct which is supported by governments worldwide.

See article from 1 May 2020 by gsmarena of the headline:


According to a security researcher working with Forbes, Xiaomi has been collecting browsing data from users who are using Xiaomi phones and the built-in browser. And the fun part is that the browser does so even in incognito mode or even when using the privacy-conscious DuckDuckGo web browser.

Gabriel Cirlig, the security researcher, is using a Redmi Note 8 as a daily driver and noticed that the device records pretty much everything he does on the phone and sends the data to servers in Russia and Singapore, although the domains are hosted in Beijing. We are talking screens, websites visited, folders opened, settings he changed, music played on the default app, etc.

The data itself is poorly encrypted using the base64 format, so it was very easy for him to transcribe the data into plain text.

Cirlig went even further and downloaded the ROMs for Xiaomi Mi 10, the Redmi K20 and the Mi Mix 3 and found the very same security vulnerability on all of them. Another security researcher, Andrew Tierney, found the suspicious behavior on the Mi Browser Pro and the Mint Browser too.

Xiaomi has responded to the allegations saying that Forbes findings are misleading and untrue. A spokesperson for the company said that Xiaomi complies with all local laws and regulations on user data privacy and the collected browsing data has been anonymized. As to why Xiaomi is collecting it, it's because the firm is trying to improve the user's browsing experience and it's a standard practice.

More importantly, the data can't be traced back to a specific user. However, Gabriel Cirlig sent a video to Xiaomi showing how the browser sends its history to the said servers even in incognito mode.

Posted by AuCorp at 2:41 PM No comments:

The premier of Queensland, Annastacia Palaszczuk has falsified the action that she was the recipient of a flu shot.

Not very 'honourable' is it? 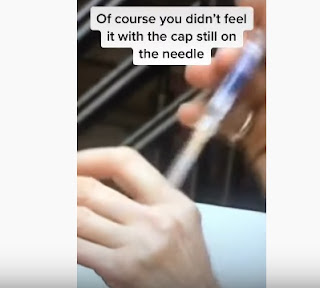 
Note: No gloves either, by the (actor) 'nurse', especially apparently critical during these 'virus times'.
Posted by AuCorp at 11:07 AM 2 comments:

The reaction to the virus in the hands of the administration of the colony called Australia, is more troubling than the virus itself.

The authorities are all over the ‘shop’ (yes this colony IS a ‘shop’ where everything is for sale) with regards to the directions the plebs must follow during this pandemic.

Speaking about having little to no clue about how to do things, let’s take a look back to the mid 1980’s how the lawmakers had no clue with regards to a certain law put into circulation.

That law is called the Australia Act, or more technically, the Australia Acts, where those in charge had no clue as to which one would ‘stick’ so two versions were made, a local one and a UK version.

This is a pathetic level of incompetency by the people in government in charge of the rest of the population.

Similarly their lunacy is shown with regards as to what people can and cannot do during this pandemic.

Let’s look at some ‘directions’ people are given in the state of Victoria.

If you listen to the mainstream media, you are not allowed to go back to work, and the reason as to why.

Whereas in stage 3 lockdown you ARE allowed to go to work.

Another point to note is that the authorities have decided that the Coronavirus is ‘discriminatory’ where it does not infect children or teachers (aw, what a ‘nice’ virus), so going back to school is okay.'

One Flew Over the Cuckoo’s Nest, eat your heart out.

The lunatics have REALLY taken over the asylum in this place. 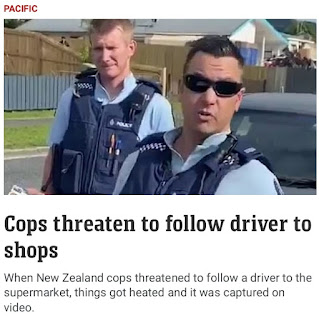 In these ‘unprecedented times’ (another government lie), in an unparalleled act of kindness, going against everything the colony’s (yes, they’re a colony too) police forces have been teaching, a brave police officer has offered to ‘preserve the peace, protect life and property, prevent offences’ by offering a personal escort for the 'consumer' to conduct an action in business/trade/commerce at the local retail store.

He was so passionate about ‘just doing his job’ that he expressed his enthusiasm very very loudly to the bewildered consumer.

By now you should realise that the above is purely a fictional scenario that did not and will not occur in the colonies of the British empire, as this is not the policy of the ‘authorities’.

You WILL be threatened, beaten, forced and/or extorted into submission.

The reality of the situation is that the victim of the police should sue the living daylights out of them. 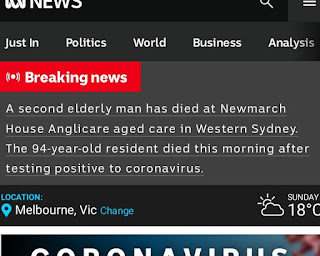 There is one office in Australia that (oddly enough) escapes the mainstream media’s eyes or public scrutiny that being the very tight knit and secretive ‘family’ of the Coroner’s ‘office’ or rather Court.

The people are told on paper that there is supposed to be a ‘separation of powers’  with respect to government institutions/departments, but in reality this is not true.

The  office has been providing false information to their ‘customers’ regarding the deceased person’s cause of death for quite some time,  where during this Coronavirus pandemic  they have stepped up the deception to include the CoD as due to Coronavirus, even though the real cause may have been different.

The ‘brotherhood’ is an absolute organisation, bound by oaths with its ‘tentacles’ everywhere in (e.g.) Australia.

Posted by AuCorp at 2:50 PM No comments: 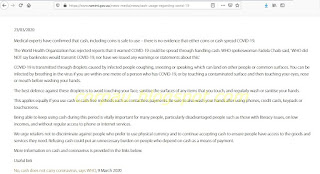 This is a screen capture from the same link as above, containing the same (alleged) post date that being the 23rd of March 2020 with different content 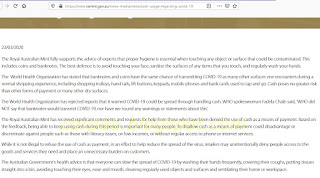 The screen capture of the above was taken on the 26th of April 2020.