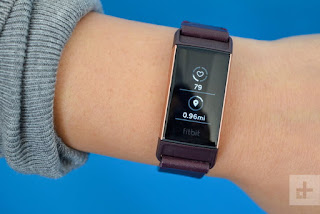 In Australia certain company takeovers are blocked from taking place, if there is an alleged danger to the consumers.

No such action in the ‘land of the free’?

That’s a shame, as  Google’s acquisition of Fitbit, will lead to Fitbit consumers being put at risk, another database added to Google’s repertoire used for spying and so called ‘marketing’ purposes.

It's not enough that Google was deceptive in their business conduct, where it stole your data, but now it will also have access to your biometric data that you have generated.

Is that truly 'good' for the consumers?

No lawsuit against Google for that, in the most litigious country on the planet?

We do not recommend the use of smartwatches/fitness tracks where one is forced to login to the corporation's servers in order to use the device or where the device stores the data  in a the 'cloud'.

Posted by AuCorp at 9:36 AM No comments: 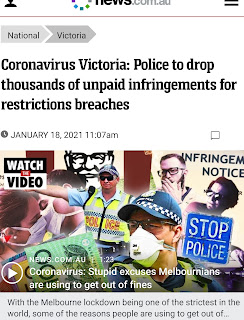 WARNING: Do not pay any state’s issued ‘COVID’ fines.

Remember when the South Australian camera fines were withdrawn and for those who paid the fines, they did not have a ‘remedy’?

Well, Victoria Police tried to con people out of their hard earned cash, by issuing ‘COVID’ fine when they had no lawful authority to do so.

If there is some sort of a claim analogous to ‘they did not know’, that is a systemic failure, where not only should a class action be taken against Victoria Police, but also the state of Victoria and others involved, e.g. Health Officer, Daniel Andrews, etc

It is of zero relevance what the police association says via the mainstream media, where this message goes out to ALL Australians and it’s quite simple:

Do not pay any ‘COVID’ related fine, period.

The unreliable witnesses have changed their story: 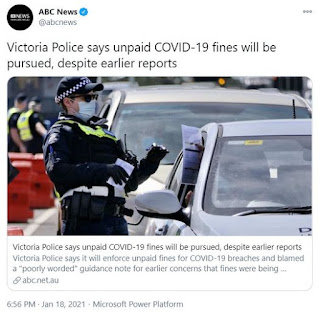 Choice whether to medicate or not taken away from Aussies?

The official word by those in government is that we Australians live in a democracy, but that is about as true as the term ‘the land of the free’ referring to another settlement on this planet.

The government of Australia is a colonial government, as described in the constitution, where those in power rule with ‘penal colony policies’ in mind.

One of those policies to take away people’s freedoms where choice is one of them.

People around the world are given the choice whether to accept medication or not, irrespective of being given full disclosure regarding the substances being put into one’s body, where this does not seem to be the case with regards to Australia.

In communist China, one knows that one is living in an authoritarian régime, where blind subservience is the order of the day.

No Team America World Police to ‘liberate the shit’ outta people, there?

The people in power within Australia are masters of deception and human rights abusers, where taking away one’s choice whether to medicate or not is just the tip of the iceberg.

They will tout that you have a choice with regard to taking medication, but that is far from reality.

You will be ‘penalised’ if you do not succumb to the government directive.

The government also penalises you for being poor, but that is another story.

You will be limited in your movements if you do not take the government (mandated) medication.

You will be denied healthcare.

You will be denied the right to earn a living in order to feed your family.

You will be denied entry to many places of service.

Allegedly all for a good cause.

At one point in time the government mandate of wearing a star on your clothes was a good idea.