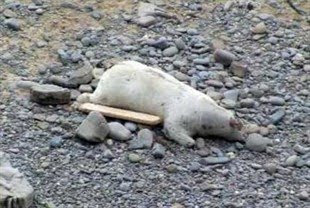 A TV station in Britain has been left red-faced after mistakenly reporting that a polar bear had washed up on a beach in southern England.

Presenter Naomi Lloyd astonished viewers of the ITV network's West Country Breakfast bulletin with a report that a polar bear had mysteriously travelled several thousand kilometres from the Arctic Circle to surface on the shores of Cornwall.

"A walker in Cornwall has caught an extraordinary sight on camera. A polar bear has washed up on a beach near Bude," Miss Lloyd told viewers.

"The bear comes from the Arctic Circle and an investigation is under way as to how it could have ended up there."

But in fact, the "white beast" turned out to be a cow that had been bleached white by sea water.

Network executives quickly dropped the item from its later bulletins after the mistake was realised.

An ITV spokesperson told the Telegraph newspaper the error was an easy one to make but admitted it was "a bit embarrassing".

"The animal caused quite a stir in Bude. Several people has seen the animal from a cliff top and thought it was a polar bear," the spokesman was quoted as saying.

"Its size and colour and its lying position on the beach did make it look like a polar bear and we had several calls. "

Another classic example, in Line with Global politics to keep the simple folk amused, and have the plebs talking about useless information in the office for the entire morning.

Another quality story bought the you by the Media Mongols. 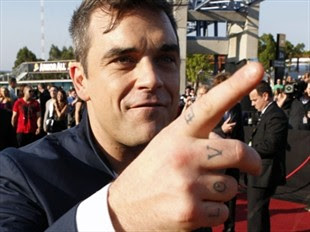 Robbie Williams says he blew his chances with popstar Kylie Minogue, after he drunkenly laughed at her naked.

The pair teamed up to film the video for hit single Kids during which she stripped for the final scenes.

But Williams says in his new book You Know Me how the shock of seeing the woman he had fancied for years undressing made him burst into laughter and left her "offended".

In the book, which was released this week and looks back at his 20-year pop career, Williams explained he had a crush on Minogue since her days on Neighbours in the late 1980s.

But after years of worshipping her from afar, he said he became "a bit of a teenage boy" in her presence during the shoot.

"I couldn't figure out why my banter wouldn't work, why my natural ability to just be myself went awry," he said.

Williams began drinking Drambuie liqueur "to get some Dutch courage, but it backfired", the singer recalled.

He had not been told that the scene would feature her taking off a robe to reveal she was wearing nothing but a tiny G-string.

"I just burst out laughing. Which I don't think went down well with Kylie," Williams said.

"I may have offended her too, because she must have felt vulnerable too, being naked on set, and being naked in front of me."

He added: "I think that any chance of anything disappeared when I laughed at her. Perhaps she likes being naked, but she probably doesn't enjoy being laughed at by some Stokie idiot."

In the book, published by Ebury Press and co-written by Chris Heath, Williams says he has been too embarrassed to ever bring the incident up since. But he said he hoped that mentioning it in the book would go "some way" to serving as an apology.

A real Top Story as depicted by ninemsn.

Ettore Gotti Tedeschi and another manager of the Istituto per le Opere di Religione (IOR), the bank's official name, are accused of violating legislation that requires banks to disclose information on financial operations.

The Vatican's spokesman declined to comment on Tuesday's report.

The funds were seized temporarily from the IOR's account in another bank, Credito Artigiano, ANSA said.

According to earlier reports in the Italian press, investigators suspect that subjects with their fiscal residence in Italy are using the IOR as a "screen" to hide dealings such as fraud or tax evasion.

The appointment was greeted at the time as a move towards greater transparency at the IOR.

US archbishop Paul Marcinkus headed the bank in 1971-1989 when it was caught up in scandals, including the collapse of the private Italian bank Banco Ambrosiano in 1982 amid accusations of links to organised crime and political "terrorism".

Posted by AuCorp at 9:59 PM No comments:

THE world's biggest mining company, BHP Billiton, is urging the Gillard government to impose a tax on carbon before any international agreement.

This is in order to protect Australia's long-term economic interests.

BHP Billiton chief executive Marius Kloppers has also warned the government not to try to change the terms of the pre-election mining tax deal negotiated with the big three miners.

In a major address yesterday, Mr Kloppers made it clear the mining industry did not intend to be passive in the face of the political uncertainty created by minority government.

His very public intervention pressures the government on two fronts: not to cede ground to the Greens and independents who wish to revisit the fundamentals of the mining tax; and to take more decisive action on climate change in the wake of Labor dropping its emissions trading scheme and the fiasco of the proposed citizens' assembly

Mr Kloppers's call for a carbon tax undermines the passionate objections of Tony Abbott to setting a price on carbon before there is a global consensus.

"We do believe that such a global initiative will eventually come and, when it does, Australia will need to have acted ahead of it to maintain its competitiveness," Mr Kloppers told a packed Australian British Chamber of Commerce lunch in Sydney.

"Carbon emissions need to have a cost impact in order to cause the consumer and companies to change behaviour and favour low-carbon alternatives.

"We all recognise this is a politically charged subject. No government relishes telling people that things need to cost more."

Mr Kloppers argued for a revenue-neutral carbon tax, insisting that the government must not treat any income as windfall revenue but return it to companies and individuals and "let the market work".

"Importantly, the government must avoid using those funds for general spending or to back 'winning technologies' - the outcome of which will likely be disappointing emissions reduction and slower growth," he said.

Instead, he called for corporate and individual tax cuts and, possibly, lump-sum payments to lower-income households to return the cost of a predictable and gradual transition that was as broadly based as possible.

The Labor government will have to negotiate the views of the Greens in the Senate, and the Greens and the independents in the House of Representatives, on both highly sensitive issues.

The Greens were able to block the ETS because it was too generous to big companies after the Liberals replaced a supportive Malcolm Turnbull as opposition leader with the antagonistic Mr Abbott.

The government is also facing great pressure from the independents and the Greens to broaden and increase the scope of the mining tax in order to get it passed, while the Liberals reject the concept of the mining tax altogether.

In a dig at the original ETS, Mr Kloppers praised the simplicity and effectiveness of a carbon tax as opposed to a "single, encompassing trading system and academically elegant economics surrounding it".

But he said there was no silver bullet and a range of approaches was needed, including land-use initiatives, which are similar to the "direct action" proposed by the opposition, and "perhaps a limited trading system" for power generation infrastructure.

Mr Kloppers's other main argument was for trade-exposed industries to have their emissions costs rebated until a global emissions reduction system was in place because they would otherwise shift their facilities offshore.

"Under these circumstances, the globe will not be better off, as the emissions will only be relocated to a different country and the Australian economy negatively impacted," Mr Kloppers said.

But this element of his proposal, at least, is sure to be resisted by the Greens and perhaps some of the independents.

Mr Kloppers said Australia would need to look beyond coal-powered electricity and towards other energy solutions. "Failure to do so will place us at a competitive disadvantage in a future where carbon is priced globally," he said.

The company also signalled a radical shift in its position on carbon policy by urging the government first to target the $120bn energy sector and parts of manufacturing in an emissions trading scheme.

But he argued that the reform was so ambitious Australia should take a staggered approach that initially spared the transport, agriculture and waste sectors.

Mr Kloppers, in his first public comments on the mining tax since the agreement with the big three miners was announced just before last month's federal election, effectively dismissed any suggestions from the independents for the issue to be discussed at next year's tax summit.

"Our basic value proposition to our customers is that if you bought it from us at a given price, we are going to deliver it to you at that price.

" I think the discussions we had with the government before the election fall into exactly that category," Mr Kloppers said.

"We agreed to something.

"We agreed to something and our intention would be to stick to it."

Mr Kloppers didn't spell out any threats about what would happen if the tax were substantially altered but the major miners dropped a very effective television advertising campaign to allow good faith negotiations with Julia Gillard on the tax just after she replaced Kevin Rudd.

The subsequent deal cut the rate of the tax and limited its application to only iron ore and coal.

The details are still being worked out by a committee led by former BHP Billiton chairman Don Argus, but the main principles are clear.

The Business Council of Australia yesterday insisted the minerals tax should be revisited during the tax summit, even if this put a $10bn hole in the government's budget forward estimates.

BCA president Graham Bradley told the National Press Club that the deal "cobbled together" by the Prime Minister and three of his biggest members, BHP Billiton, Rio Tinto and Xstrata, was an "unsatisfactory tax process".

Climate Change Minister Greg Combet said he welcomed Mr Kloppers's contribution to the climate change debate. "As I have indicated, my three priority areas are support for renewable energy, greater energy efficiency in industry and households, and working towards the introduction of a carbon price," Mr Combet said.

"I will be working with other parliamentarians, the business community and the environmental movement to build consensus and to discuss the best way we can achieve a price on carbon."

Greens climate change spokeswoman Christine Milne said: "I welcome Marius Kloppers' acknowledgement that a carbon price is inevitable, and that Australia should get moving on it, but it will be the parliament in charge of designing a scheme this time - not lobbyists in ministerial offices.

Posted by AuCorp at 9:49 PM No comments: 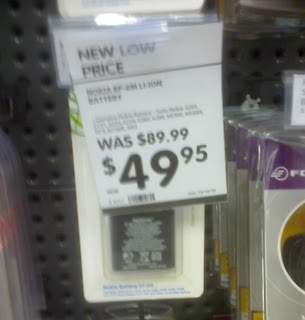 This is generally practiced in all Dick Smith stores.

In this example Dick Smith claims that the Nokia Battery BP-6M retailed for the price of $89.99


Upon further inspection, the ORIGINAL price of the battery
was in fact $49.95. 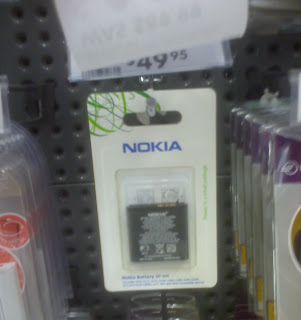 There is NO price reduction, as claimed by Dick Smith Electronics.

The electronics stores Tandy and Dick Smith Electronics are now owned by the retail giant Woolworths.

Since the business elite of these stores are cronies of the political and law community, they are exempt from prosecution / fines.

False advertising is illegal in Australia, and according to the ACCC, fines apply to those in breach of the code of practice.

Dick Smith has NOT been fined for fraudulent advertising.