Western Australia Police a corporate entity and not a government one

Don't f_ck with our corporate logo or our brand name is the message from the corporate entity called Western Australia Police.

The 'Australian Government' today is a corporation conglomerate whereas according to the book of rules (you know the law (i.e. an 'Act') called Commonwealth of Australia Constitution Act) an 'entity' is supposed to be a state or federal department.

Let's give the 'ward of the state' a simple example.

People should be familiar with a business entity called a 'City Council' or 'local government' or municipal office/institution, which incidentally are not the same entity.

The term 'Local Government' today is referred to the business entity called the 'City Council'.

In recent news a thief Mr. Don Nardella (who when caught did not want to pay the money back, told Vic. parliament to "f_ck off" and to "get f_cked") in the Victorian Parliament worked for a business  called the Melton 'City Council', a place where people pay cash for something called 'rates'.

Your 'rates' are supposed to be going to a place called a 'municipal office' a department of the state of Victoria as described in a book called the 'Quick and Garran' on pages 935 and 936, and NOT a business.

So this business is taking your 'rates' unlawfully, but don't worry about it too much and keep on paying, because it's TOO HARD to deal with... but that's another post or dozen.

So with this above mentioned Act, the separation of powers and the executive in mind, the police are supposed to be a government department, whereas they are telling you they are not.

So much misbehaviour (read criminal actions) from people in the executive.

Now, the Western Australia Police claim that their logo is protected by the Armorial Bearings Protection Act 1979.

Have you got the skills to prove that this Act is invalid?

Double standards: Why is only one of these emblems not OK? 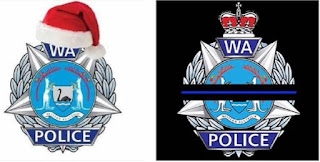 According to the Western Australia Police, only one of these altered emblems is OK.

A NOT-for-profit organisation has accused Western Australia Police of having double standards after it was told to remove a Facebook post that included an official emblem with a superimposed line to honour an officer who died.
That’s despite WA Police having previously published photos of the same emblem with a Santa hat on it for Christmas and poppies around it for Remembrance Day on its Facebook page.

Blue Hope, a not-for-profit organisation that supports police officers, posted an image of the WA Police emblem with the addition of a blue line — a symbol of remembrance — through the middle. It came with a message of support following the death of a WA Police officer, who was believed to have taken her own life last week.

The post attracted thousands of supportive comments including many that described the woman as “popular ... much-loved ... amazing”.

But WA Police quickly ordered the organisation to delete the image, claiming it was a violation of the law to alter the Coat of Arms.

WA Police argued that the altered emblem used by Blue Hope breached the Armorial Bearings Protection Act 1979 that prohibits the unauthorised use of the Royal, State or other Arms.

The Act was introduced almost 40 years ago and does not specify that police logos can’t be used in a sympathetic or humorous way.

But it does restrict people from using an image of the Coat of Arms without approval, although news.com.au understands no one has ever been prosecuted for doing so. The maximum penalty for breaching the Act is a $500 fine. 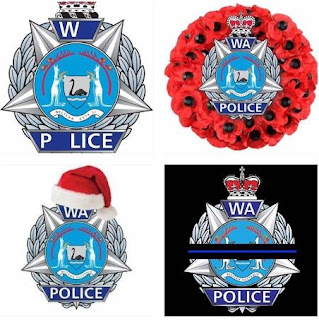 Western Australia Police emblems. According to WA Police, all are acceptable except for the one on the bottom right.Source:Supplied

But many social media users pointed out that the WA Police has posted several altered images of the emblem, included Christmas and Remembrance Day versions, on its Facebook page over the past year.

“I’m confused. Which one is OK? The media unit ones, or the one they didn’t do???” one social media user wrote.

Another said: “Ah yes, the breach of the Armorial Bearings protection act 1979 is obviously more important than the tragic loss and grief felt by many. Political Correctness at its worst. No sympathy here, we have an Act to comply with. Disgusting.”

“The kangaroo and emu were chosen as the animals to represent our coats of arms nationally, because they are the only ones who cannot take a backward step, yet the people prove again, how backwards we really are,” another said.

A WA Police spokesperson told news.com.au it was “simply taking steps to protect its brand”.

“The death of a serving police officer is always sad for the police family,” the spokesperson said.

“WA Police supports the work of Blue Hope but, for good reason, always endeavours to protect the police badge from being modified or misused by others.

“We simply asked Blue Hope to not modify the badge and they acted immediately. It was not in any way a commentary on the officer’s death, as some implied it was.

“The Act prohibits the unauthorised use of the Royal or State Arms without written authority, in this case from the WA Police.

“The police badge has evolved over many years and on rare occasions the agency itself has elected to make changes or use it in different ways, as it is entitled to do.”

Earlier, a statement issued by WA Police to Blue Hope sought to “clarify its position on the use of the official logo”.

“We became aware of the recent Facebook post where the organisation had, with all good intentions, altered the WA Police logo to reinforce its message,” the statement read.

“This altered image was starting to appear on some of the WA Police sites, which drew our attention to the post.

“Even when WA Police exercises its own corporate discretion to alter our own logo, it cannot alter the Coat of Arms, which is the central element of our logo.

“In this case the Coat of Arms had been obscured, and once we became aware of the breach we were obliged to notify Blue Hope and request that the material be removed.

“The intent was to prevent that particular breach being replicated by the many who engaged in what was otherwise a thoughtful and supportive message.”

Blue Hope immediately removed the image in the spirit of co-operation, according to the organisation.

But the organisation “wants to know why it was acceptable (for WA Police to decorate its emblem) but why, in an effort to honour an officer, (Blue Hope’s) was not acceptable”.

“Sadly though, removing the image also means that our original post and your amazing messages of support for the member and her family will also be removed,” a Blue Hope spokesperson said.

“Interestingly, similar images are used all over the world as a means of respect following the death of a police member.”

The incident comes after news.com.au exposed a mental health crisis within the Australian Federal Police. Many officers have since come forward to highlight that the problem is also evident in state policing. On Sunday night, a South Australia police officer posted “F*** the police, f*** the army” on his Facebook page before going to a local hospital and taking his life.

The best part about it is that if they get caught stealing money from the 'public purse' they then tell their bosses to "f_ck off" and to "get f_cked".

At least the sack of sh!t  Donato Nardella, is NOT called 'honourable' in his Victorian Parliament profile.

Apparently these 'people' are supposed to represent the masses.

Maybe people outside of Australia would see the general populous as criminals if the behaviour of their parliamentarians is anything to go by.

Can you imagine if a person on welfare payments told the interloping agency Centrelink to:
"F_UCK OFF" or "GET F_CKED" ??? !!! ???

You reckon you would get your cheque next fortnight? 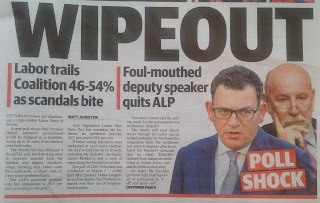 Vault 7: CIA Hacking Tools Revealed from WikiLeaks is available for download from:

ENCRYPTED RELEASE
Use a 'torrent' downloader on: https://t.co/gpBxJAoYD5
And '7z' to decrypt. 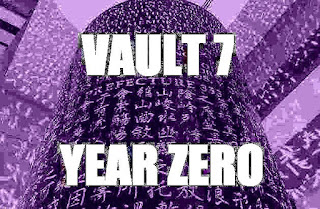 China's government stated not that long ago that Australia was once roamed by "rascals and outlaws".

We're quite happy to state that Australia is run (you know people in the 'executive' - people in parliament, people in the courts, and the one's (en)'forcing' the law upon you)  by "rascals and outlaws".

AUDIT ALL THE MP's. 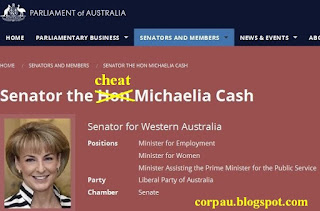 They call this piece of garbage 'Honourable' (whatever that means)..

Another cheat in parliament by the name of Michaelia Cash, an 'employment' minister, whatever that is.

Obviously FAILED at her job, as there are over (officially) 700,000 UNemployed Australians. 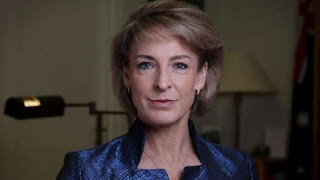 A Turnbull government cabinet minister has been caught out failing to properly declare her financial interests, potentially placing her in "serious contempt" of federal parliament.

Employment Minister Michaelia Cash did not declare a mortgage on a $1.4 million investment property for almost four months – and finally made the disclosure only after questions from Fairfax Media.

Ms Cash bought the house next door to her home in the upmarket Perth suburb of Floreat in early November, property records show.

It's the fourth house in her portfolio, and second investment property. Ms Cash took almost three months to declare the house but did not declare the new mortgage – both of which are required under the rules.

Asked about the potential oversight on February 20, Ms Cash's office declined to comment. But disclosures released on Monday reveal she quietly added the Bankwest mortgage to her register on February 21. 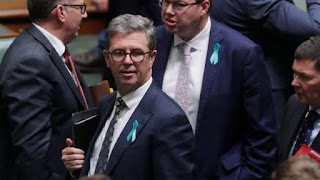 Under the rules, any MP who knowingly fails to notify of any alteration to their interests within 28 days "shall be guilty of serious contempt of the House of Representatives and shall be dealt with by the House accordingly". Senator Cash took 78 days to declare the house and 109 days to declare the mortgage.

During last year's election campaign, Labor frontbencher David Feeney was slammed for failing to declare a $2.3 million negatively geared home. He later conceded it was the "biggest own goal" of the campaign.

And in 2010, then-opposition leader Tony Abbott was criticised when it was revealed he had failed to declare a $700,000 mortgage he took out on his Sydney home two years earlier.

Assistant Health Minister David Gillespie has also pledged to review his entire register of interests after he was caught out declaring an interest in a company that was deregistered two years earlier.

In his latest register, assembled after the election last year, Dr Gillespie declared a major financial stake in Port Macquarie Gastroenterology – even though the company was shuttered two years earlier.

Dr Gillespie conceded he was careless, saying he thought the company had been put into a freeze when it had in fact been closed down.

"It was an oversight," he told Fairfax Media. "It's my fault, I should have been more inquisitive."
Fairfax Media has sought fresh comment from Senator Cash.