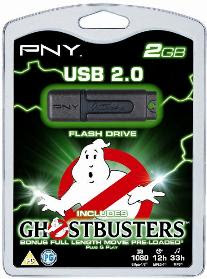 The 1984 comedy Ghostbusters is one of the funniest movies ever made (that's a PERSONAL OPINION) , and it will now be remembered as the first film ever to be released in USB flash drive format. PNY and Sony Pictures Entertainment recently announced plans to pre-load the film on specially marked 2GB USB drives.

The film is put on flash drive in a DRM format, so a user cannot copy it. However, you can download it to your PC in case you need your ectoplasmic fix for the day. Unfortunately, if you try and play the movie without the flash drive inserted, you will get slimed, as it will not work.

This is the first time a movie has been used to sell a flash drive, but it probably won’t be the last. Perhaps all movies will be on flash drives someday, but these flash drives should probably be some sort of special packaging. This Ghostbusters flash drive, by itself, has no branding of any kind, but it does have 12 hours of video play, 33 hours of music and 1080 picture capacity.

I bought it, I have the right to COPY it to my machine and use it WITHOUT the flash drive.

Another reason NOT to buy SONY products. It is messages like this that are sent out to impressionable (girls) that you are a success if you're a party animal, and a Trailer Park Whore.

But the pop star ended up telling her awards co-host Sir Elton John, to f*** off, when he suggested she may have had too much champagne.

The seed is implanted, to make the vulnerable, want to be famous, with the allure that fame and fortune will come their way.

What is not told that EVERYTHING has a price, and most importantly the money made from you is more significant.

The purses strings of Hollywood are held by a financial elite.

Treasurer Wayne Swan admits he couldn't survive on the aged pension but says recipients will have to wait until next year before the government considers any increase.

From September 20, the single aged pension will be around $560.

When asked if he could survive on that amount, Mr Swan said no.

Mr Swan said in recognition of that, the government provided a $500 bonus and increased the utility allowance in last year's budget.

But he said pensioners would have to wait until next year before the government considers lifting the pension.

"The reason we put in place the $500 bonus and the increase in the utilities allowance was in recognition of how difficult they are doing it at the moment," Mr Swan said.

"But we can't undo in one budget what the previous government didn't do in 12.

"We are considering a rise, we said we would have the report from the Henry review back by February, and that would be considered in the context of the next budget."

Treasury secretary Ken Henry will head a review of taxes on work, investment, property, savings and consumption and their impact on individuals, families and retirees.

So the politicians are FULLY AWARE that the support they provide for the retired TAX PAYER is INADEQUATE.

Measures that will help people, will take longer to implement, than laws that take money from the public.

This has been known for quite some time, as government payments are carefully modeled.

Victorian authorities reportedly knew a four-year-old girl was at risk from a drug-addicted couple two years before a car accident that has left her fighting for life.

Under the heading, Likelihood of future harm, the DHS report says the child had been in a vehicle while her parents were substance-affected and driving.

"The 2006 DHS report concludes with the warning: 'The child has suffered, or is likely to suffer, significant harm as a result of physical injury and the child's parents have not protected, or are unlikely to protect, the child from harm of that type,' the newspaper said.

Shortly after 5am (AEST) on Wednesday, the child was critically injured after the car she was in crashed in St Albans, Melbourne.

She was not wearing a seat belt and was found under the front seat by paramedics who attended the accident. She is in a critical condition at the Royal Children's Hospital.

The DHS has launched an investigation into the girl's treatment.

What is tragic about stories like this is that it is well known that the parents are incapable of raising a child, reports are written, BUT there is NO ACTION TAKEN to safeguard the child.

This is general policy, and RARELY any preventative action is taken. Generally people of this calibre are considered CANON FODDER and not any government priority list.

What chance does a child have ? 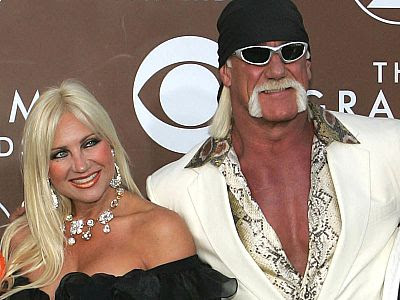 Hulk Hogan and his estranged wife are wrangling over how much money the celebrity wrestler is worth.

According to financial affidavits filed in divorce court near Tampa, Florida, Hogan claims his net worth is $US32 ($A39.48) million; his wife claims it is $US26.7 million ($A32.94 million).

The couple's quarrelling over money comes as their son, Nick, is serving an eight-month jail sentence for causing a traffic crash that left a passenger permanently disabled.

Not really delving into the Hollywood Entertainment scene, as it is the biggest Whore House Ghetto on the Planet, but the allure of this article proved too much to resist.

People like those two muppets are the pinnacle of Hollywood Trash.

"The couple's quarrelling over money" is quite a common line. How has she benefited the couple financially? Or is she just a leech, and needs MORE than $1,700 per month to keep her happy?

The real question is how much has Hollywood made from him ?
Posted by AuCorp at 9:28 AM No comments: