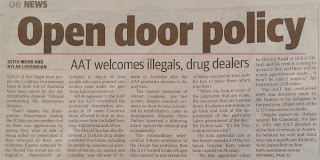 It's official, it's "open slather" for overseas criminals to come into the country to rort social security or rather hard working Australian's tax dollars.

People should be aware that the corporation conglomerate called the 'Australian Government' allocates a certain amount of funds for the general population who are on 'benefits' or welfare, the likes of the unemployed or unemployable, pensioners and people who are unable to care for themselves.

The business called Centrelink (ABN: 29 468 422 437) has been seconded to hand out payments to welfare recipients, where there is a limited budget.

So, what the CEO of Centrelink, Grant Tidswell does is "cook the books" with false statistics of people actually "on the dole", falsely accusing people dole bludgers for 'breaching' their obligations, and kicking old / disabled people off the pension in order to make room for migrant criminals. As if Australia has not got enough home brewed ones.

Why does one say Grant Tidswell does this?

Because ultimately the CEO is responsible for the business.

Some people may call the system 'broken' where in reality what's happening is exactly what the executive has decided to happen.

Posted by AuCorp at 5:00 PM No comments: 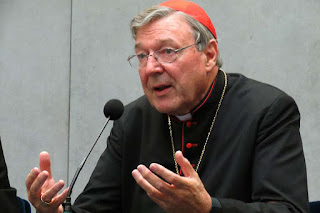 The good Australian people were told that the police were "weighing up" whether or not to charge Cardinal George Pell over the criminal offence of sexual assault dating back to the late 1970s.

What the general population should know is that a fundamental of criminal law is that there must be something called "beyond reasonable doubt" in order for charges to proceed for that alleged criminal offence.

Let's take an example of a 'criminal' offence Australian motorists do every single day.

The 'good' law makers over the Australian people have classified an action of traveling over the speed limit or through an intersection with a red light alleged by a machine (camera) and not by any man or woman, i.e. policeman or police woman as a criminal offence.

To make matters worse for the plebs, the registered owner of that vehicle is (unlawfully) considered "guilty until proven innocent" (Roman law) where the authorities unlawfully applied "owner onus" in statute.

At law the police MUST prove who the driver was "beyond reasonable doubt" in order for ANY alleged charges  to be laid.

The police do NOT "weigh up" any actions against the registered motorist, but rather they are considered guilty where they must prove they are innocent.

It 'seems' like the police are in on it (Pell's matter) too.

Even if he does come back to Australia, it will be at face value.

In the matter of Cardinal George Pell, he (allegedly) sexually assaulted children in the 1970's and when the heat got turned up he "escaped" to a place where the Australian "Roman law" cannot touch him i.e. Vatican City, where there is NO extradition treaty.

Let's not forget THE best excuse of too ill to face ANY charges / prison time.

Apparently the commoners are told that no one is "above the law", yet a man from a part of the 'executive' can be untouched by the very same laws(?) applied to the cattle population?

It's "Roman law" for the slave population, and extradition free zones for the executive.

STILL not convinced you're a slave on this colony?

Sometimes the BS is in front of your face, other times you have to dig deep to find the truth.

In 2008 the MAGISTRATES' COURT of VICTORIA produced a beautiful brochure celebrating 170 years.

One Hundred and Seventy years of  what they are claiming to be the 'people's court'.

This splendid illustration can be downloaded (without the yellow words on black background) from:

Australian courts are not 'people's court's'.

They are run by the executive and today are corporatised.

You just never know what those dodgy people in the executive are up to...

Maybe just maybe the people in the executive registered the "MAGISTRATE'S COURT of VICTORIA" under the name of "THE PEOPLE'S COURT"? 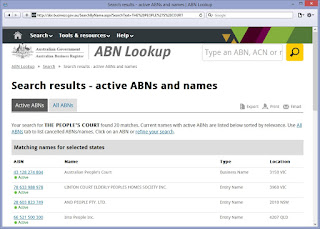 During the inception of the above said court in Victoria, it was called the Police Court, and for a very good reason.

This signified the court belonged / was operated by the police and not the 'people', otherwise some bright spark would have called it the "PEOPLE'S COURT" or the "CONVICTS COURT" alluding that it was 'their' court.
Posted by AuCorp at 12:57 AM 2 comments: