The people in government assure the consumers in Australia that the three arms of government function independently of each other, without bias or influence.

To remind the lay person, the three (allegedly) independent arms of government are:

1). Executive :- The Queen (U.K. Monarch) and NOT the unlawful paper entity the queen of Australia, Governor General

Let's take another important aspect that Australian case law should give the mass population the impression that no 'person' is above the law.

The inception of police in Australia is that from a criminal element of society that being convicts, something no doubt our honest police force would rather the public not be aware of.

Tax slaves should also be aware that the police do not work for 'you' (the serfs) but rather the people in government, where the general population is literally the police force's enemy.

Another reminder is that the police are not answerable to the general population.

The police practice lies, deception,  false information, entrapment in order to obtain convictions against the general population, arising from policies from their 'bosses' the people in government.

The above ties the second and third arm of government together, therefore not independent as suggested.

The evidence of this is has reared its ugly head with regards to the very public crime wave by migrant Africans.

Please note that this crime wave is not new and has been around for over a dozen years with this specific migrant population, where the authorities have done very little to curb the 'problem'  where the good people of Australia are in harm's way in the hands of their government.

Bronwyn Bishop stated in 2015 that the first job of a government is to;

"look after the safety of its people"

a job that the current people in government failed at, where realistically they should be removed from their positions in government.

Since police are falsifying the reports of criminal activity; 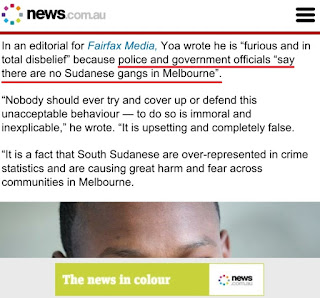 how can you (the lay person) trust the police or even the people in government responsible for importing criminals into Australia?

Unless it's back to the policies of 1788 of this colony, where Martial  Law (officially) ruled for quite some time.

Crime, an excellent business for the people IN government, but not so good for the serf's on the receiving end of it.

The business called the 'Australia Government' importing terrorists, then creating laws to keep the good people of Australia 'safe'? WTF ??? !!! ???

Government Fail Australia the best at it?


What does the future hold for the good Australian people in 2018?

IF 'priors' are anything to go by, then the good people of Australia are just going to get screwed hard by the people in government just like every other year where the best part about it is that they (the general population) are just going to take it.

So when one asks a search engine what a "government fail" is the following result is shown: 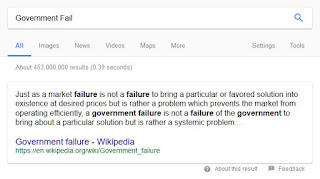 where the screen capture above states the following:

In Australia, the people in government have stated to the serf population that the;

"first job of a government is to look after the safety of its people".

Let's take a look at one example;

The people in government have decided to import migrants who deliberately have chosen to take criminal actions that cause harm to the good people of Australia.

In all likelihood the people in government had a fair idea that these migrants would cause harm to the good people of Australia, but in any event have still decided to import these migrants.

The people in government did not adhere to their public statement to "look after the safety of its people", therefore a;

Let's have a look at another type of 'harm' caused by the people in government.

The people in the Australian Government have seconded others to take on many infrastructure projects, the likes of building roads, a desalination plant, railway upgrades and telecommunications backbone upgrades.

Many if not all of these projects have suffered a "budget blowout" (or money for mates deal), which in effect causes 'harm' to the public's tax dollars used for the funding.

Since there is no money taken out of the politician's own wallet, one can easily be of the opinion that the care factor is zero.

With the people in government expediting the importation of savages / corporate slaves (under the banner of 'human rights') from overseas who in turn harm the 'good' people of Australia, and not any politician or their families directly, these savages being new to water, electricity, automobiles and employment are all here under 'hue-man' rights courtesy of the Australian tax slaves, while good Australian people watch their children have their jobs taken away from them by cheap imported slave labour.

So where is the employment of 'human rights' for Australians to have a job to support their families?

Domestic violence as a result of lack of employment, a government created condition, is a "Government Fail"

The people in government deliberately do not plan for upgrades to infrastructure (water, electricity, roads, etc) needed to accommodate these newly imported criminals, where (e.g.) traffic congestion is created, causing pressure to families, an action that is seen as a deliberate assault on the family unit.

Instead of the government allowing for more megawatt production of electricity for the newly displaced savages to enjoy, the people in government disassemble electricity production plants citing some BS climate change occurrence, in effect causing more financial stress (i.e. harm) to the good people of Australia.

It seems that these Mutts in Parliament despise the good people of Australia, the people that they are supposed to 're-present'.

The people, by their inaction are stating that they are happy and content with the way they are 'governed'.

AUSTRALIA: the Concealed Colony!
(the book the federal police removed from bookstores!)

Posted by AuCorp at 8:20 AM No comments:

Just a reminder for the good people of Australia 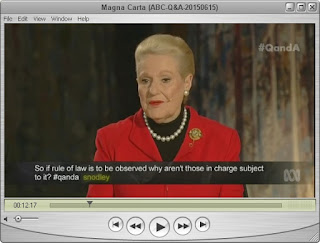