There are plenty of indicators both in law and action on the streets that Australia is a police state as started on the 26th of January 1788, but distractions of the footy and beer keep the herd population docile.

One place that has officially lost its democracy is Queensland, that being in 1922, but that's another story altogether.

Among other crimes committed, it seems that the business called QPS (Queensland Police Service, ABN:29 409 225 509) nurtures stalkers and hackers, who do not get prosecuted according to the same laws that are handed out to the slave population.

Australia's judicature is one cesspool of criminal activity, where now apparently judges and magistrates are making it public knowledge that they are stressed.

Maybe because they've heard too many cases ex-parte which is unlawful, and they know they are liable for their actions, where some people are slowly waking up to this.

But that's another story altogether.

Let's read the article by theguardian.com of the headline:


Of officers charged, one accessed ex-girlfriends’ data and one gave woman’s details to abusive partner 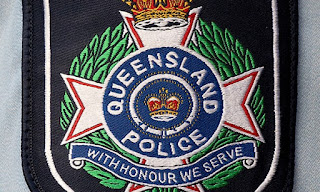 Queensland police took no action against 52 of 59 officers investigated for hacking in 13 months. Photograph: Dave Hunt/AAP


Queensland police took no disciplinary action against 52 of the 59 officers investigated internally for computer hacking during a 13-month period, amid concern police do not have adequate measures in place to prevent the wrongful access of private personal data.

Four police officers were charged with computer hacking offences last year under what was considered a crackdown on improper access of the Queensland Police Records and Information Management Exchange (QPrime) database, which stores personal information.

In one case, an officer was charged for looking up personal details of his former girlfriends and the former Australian netball captain, Laura Geitz, “out of curiosity”.

But concerns have been raised that comparatively more serious cases have not led to similar charges or proper disciplinary action.

Renee Eaves, a social justice advocate, found out through a right to information request in 2016 that her personal information had been accessed 1,400 times since 2008. She does not have a criminal record.

A police officer sent the address of a Gold Coast woman to her abusive former partner and advised the man to “just tell her you know where she lives and leave it at that”.

The Brisbane Times reported this week that the woman at the centre of that case recorded a conversation with police commissioner Ian Stewart, in which Stewart said there “was insufficient evidence to place it before a criminal court. We then took that down our discipline process”.

Michael Cope, the president of the Queensland Council for Civil Liberties, said police accessing personal information was a systemic problem.

“The public has lost confidence in this process. We’re going back to the bad old days, pre-Fitzgerald.”

Information released under Queensland right to information laws shows police conducted 59 investigations into improper access of the QPrime database between August 2016 and September 2017.

In 52 cases, no further action was taken. These included some allegations deemed vexatious, and allegations where police were unable to obtain sufficient evidence. Specific details of the allegations were redacted.

Two officers were dealt with by “chastisement”. Two had their salaries reduced. In three cases, allegations were found to be true, but the files gave no details of what action was taken.

Cope said police security measures were clearly not good enough. He said most modern organisations that retained sensitive data had sophisticated tracking systems that would be able to closely monitor who was accessing data, and for what purpose.

“The security system in being able to track people who get in this system is not as good as in other institutions,” Cope said.

“If complaints are being dismissed for lack of evidence ... it means their control over data access is just not up to modern standards.

“It may well be the tip of the iceberg. There may be people whose information has been used and abused and have no idea about it. That would suggest there’s something wrong with their internal data controls.”

“This needs to be taken more seriously and it’s time for the CCC to get involved and conduct a review of these investigations and perhaps exercise their power to take on some of these and do them themselves.”

The police union president, Ian Leavers, has previously said police were afraid to properly investigate cases due to fear of being accused of improper use of the QPrime database. The union last year published guidelines for officers and suggested they document their access.
Posted by AuCorp at 10:12 AM