Should Australian's employ Kim Jong-un to 'fix up' their politicians?

It should be no secret to the Australian people, that their politicians are a corrupt bunch, together with the police, law makers, that make unlawful laws, and the judiciary that is in reality a 'star chamber' contrary to the entrenched laws of Great Britain, the Australian people have an [untouchable by law] sophisticated white collar crime network in place.

So what is one to do?

If the corporate media says someone's bad are they really good?

How does North Korea's 'dictator' deal with the criminal element in politics?

In law: the people sitting in government are there by 'de facto' not the true de jure government.
The are up for (alleged) treason, a crime punishable by the death penalty. That’s according to South Korean authorities who say the North Korean leader has executed 70 officials since taking power in late 2011 in a “reign of terror” that far exceeds the bloodshed of his father.

During a forum in Seoul this week, South Korean Foreign Minister Yun Byung-se said Kim Jong-il, Kim Jong-un’s father, had only executed about 10 officials during his first years in power.

An official from South Korea’s National Intelligence Service, who refused to be named, confirmed the spy agency believed the younger Kim has ordered the deaths of around 70 officials but wouldn’t reveal how it obtained the information.

North Korea, an authoritarian nation ruled by the Kim family since its founding in 1948, is secretive about its government’s inner workings, and information collected by outsiders is often impossible to confirm. Kim Jong-un looking serious. This must have been before he found out he beat his father’s record for the most executions during his first few years as leader. Source: AFP
High-level government purges have a long history in North Korea.

To strengthen his power, Kim Jong-un’s grandfather, North Korea founder Kim Il-Sung, removed pro-Soviet and pro-Chinese factions within the senior leadership in the years after the 1950-53 Korean War.
The high-ranking victims included Pak Hon Yong, formerly the vice chairman of the ruling Workers’ Party of Korea and the country’s foreign minister, who was executed in 1955 after being accused of spying for the US.

Kim Jong-un has also removed key members of the old guard through a series of purges since taking over after the death of Kim Jong-il.

The most spectacular purge to date was the 2013 execution of his uncle, Jang Song Thaek, for alleged treason.

Jang was married to Kim Jong-il’s sister and was once considered the second most powerful man in North Korea.

South Korea’s spy agency claimed that in May, Kim ordered his then-defence chief Hyon Yong Chol executed with an anti-aircraft gun for complaining about the young ruler, talking back to him and sleeping during a meeting.

Experts say Kim Jong-un could be using fear to solidify his leadership, but those efforts could fail if he doesn’t improve the country’s shattered economy.

Posted by AuCorp at 9:25 AM No comments:

MORE than $1 million has been stolen from Australian Citibank customers after a major security breach that involved a Filipino call centre worker selling personal details to a crime syndicate in Sydney.
Police will allege the details of 30 Australian customers were stolen and on sold to the syndicate in Australia, who then used the details to take out fraudulent credit cards and bank loans.

The call centre scandal was uncovered when officers from the St George Local Area Command did a routine traffic stop and searched a vehicle in Beverly Hills two weeks ago. They discovered documents that did not match the driver or occupants of the vehicle and were linked back to Citibank customers who had reported funds missing from their accounts.

In a joint investigation with the Fraud and Cybercrime Squad, police were able to trace the leak back to a call centre in the Philippines.

“Personally and professionally it’s very alarming that personal information is being sold by the very people you trust to keep it secure and they are using it for fraudulent transactions,” St George LAC Commander Superintendent Dave Donohue told The Daily Telegraph.

“If this isn’t a wake-up call to financial institutions, I don’t know what is.”

Police carried out raids this morning at two homes at Liverpool and West Hoxton and arrested four men over the scam.

The men, aged 38, 33, 29 and 23, were taken to Liverpool Police Station and charged with fraud offences and dealing with proceeds of crime.

A Citibank spokesman said the company identified fraud committed against a “small number” of customer accounts and immediately reported the matter to the NSW Police Fraud Squad.

“We are cooperating fully with the police investigation and are satisfied that all those responsible have been identified,” the spokesman said.

“Citi places the highest importance on security and maintains a zero tolerance for fraud of any kind.

Customers will not be financially impacted by any unauthorised activity as a result of this fraud. As these matters are now before the court it is not appropriate for Citi to make further comment.” Police arrest a man in connection to investigations into identity crime and call centre fraud. Picture: NSW Police Media
Detectives are investigating whether customer details from other financial institutions have been compromised and are working with overseas counterparts to find the person responsible for selling the information.

Supt Donohue praised the work of the eagle-eyed officers who uncovered the documents, saying the potential for more people to be targeted was “huge”.

Commander of the Fraud and Cybercrime Squad, Detective Acting Superintendent John Watson thanked the bank for assisting with the infestation and helping to stamp out fraud.

The four men were refused bail to appear at Parramatta Local Court tomorrow.

This is only one instance that the police let you know about.

There are plenty more that the masses do not know about as police do not release this information.

Keep sending 'our' jobs to dodgy overseas call centres where there is little regard for 'law'.

For those on this planet, who are on the World Wide Web, who maybe in Alaska have heard of the Melbourne gangland killings and want to know where maybe Robert Williams lives, then you have your golden nugget given to you on a silver platter by the Herald Sun.

As per today's article on page 5 of the daily newspaper Herald Sun, they have revealed her address.

From the article, with a little bit of 'internet detective' skills, one can find Primrose St via our favourite search engine: 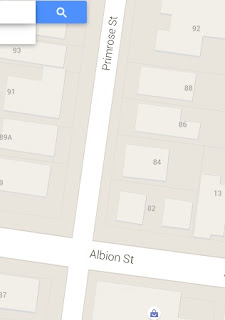 Then have a look at the 'trashed' house, and her house is only 'meters away'.

Anyone see a lawsuit coming on?

The Rupert Murdoch media has asked the some people a question and published it in their Herald Sun publication, under the section called VOX POP.

The questioned posed to the masses was:

as seen in illustration below:

Some people may say:

"Do we have a constitution?".


Some people may not even be aware that an entrenched 'British' law from 1688 or 1689 depending on which Act, is also valid in Australia called the Bill of Rights.

This is done with careful selection of words put to the people in order to make a vote on, for the benefit of the corporation conglomerate and NOT the people.

You can download a copy of the Australian Constitution in a document called:

An Act to Constitute the Commonwealth of Australia [9th July 1900], where the Constitution is contained in Clause 9 at:


It is also available from:


You can also obtain commentaries to the Australian Constitution by John Quick and Robert Garran in a document called:

The annotated constitution of the Commonwealth by Quick and Garran at:

This is one of THE most important documents in Australia that the people can call upon in law.

DO NOT let the corporations take it away from you!
Posted by AuCorp at 6:27 PM No comments:

Welfare reforms needed but in the wrong direction?

AS reported by the Herald Sun (herein referred to as the H/S) daily publication, apparently: 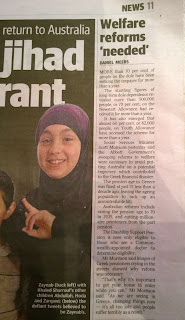 "MORE than 70 per cent of people on the dole have been milking the taxpayer for more than a year".

In the same article does the H/S mention that the government lets in 290,000 immigrants, approx. 1000 per week into Victoria?

Does the H/S mention that these immigrants come to Australia under the 457 Visa taking away jobs from Australians for at least half of the labour cost saving to employers?

Does the H/S mention that prior to immigration the prospective immigrants burn their identification papers and other documents claiming that they are 'refugees' in order to immigrate to Australia to 'scum' of the system or in order to commit crime?

Does the H/S mention that there are immigration classes overseas teaching potential immigrants how to 'cheat' welfare'?

Does the H/S mention that 'trouble maker' immigrants are sought to keep the masses at bay?*

Does the H/S mention that the government gives away taxpayers hard earned dollars, in the magnitude of ten thousand,  for 'refugees' to set them up with new furniture, LCD tv's, iPhones, tablets while there are desperate homeless people including children that need financial support that the government (deliberately) does not give them?

Does the H/S mention how many Aussies cannot get jobs because they have been replaced by migrant labour?

Another coverup of the truth and propaganda spin, by the official government lap dog, the corporate media.

* Warning, the sentence 'could' be conspiracy theory. 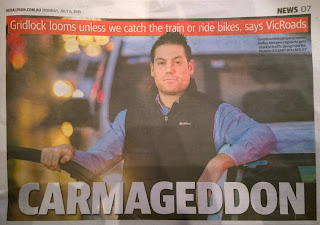 Gridlock looms unless we catch the train or ride bikes, says VicRoads.


The Reality put as simply as possible (for the plebs):

The Corporation Conglomerate (nee government) has (deliberately) failed to allocate the required tax dollars for infrastructure projects in accordance with the (natural) increase in population, consequently (apparently) blaming the plebs for the 'gridlock'.

Man dies after shooting firework from top of his head

© Provided by The Independent A Fourth of July fireworks stunt has gone horribly wrong for Devon Staples.

A 22-year-old man has died after he set off a fireworks mortar from his head in Calais, Maine.

Devon Staples was celebrating the Fourth of July with friends when he placed a reloadable motor tube on his head, set it off and died instantly.

Stephen McCausland, spokesman for the Maine Department of Public Safety, told the Bangor Daily News that Mr Staples had been drinking alcohol and that explosion immediately caused a fatal head injury.

“When he suggested he was going to do this, his friends gathered around him and they thought they had convinced him not to do it,” he said.

However, the victim's brother Cody Staples refuted multiple reports, telling the New York Daily News that the incident was "a freak accident."

The incident marks the first reported death in a fireworks accidents in Maine since their legalisation in 2012.
According the Associated Press, state fire marshals were investigating several other fireworks accidents involving injuries in Friendship, Jefferson, Lebanon and Woodstock. Officials said the accidents mostly involved burns and minor eye injuries.

There is really absolutely no shortage of f*ckwits on this planet!

Thankfully this one will no longer be able to breed, passing on his faulty genes to some poor unsuspecting soul.
The "Trailer park Trash" file has been quite lonely for some time, so it had a bit of a top up with this imbecile!
Posted by AuCorp at 9:00 PM No comments: