Senator Rodney Culleton's letter to the PM and other (alleged) criminals 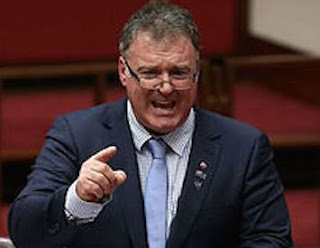 The Australian people sure are dictated to by a bunch of (alleged) criminals.
Since the enactment of a law called the Commonwealth of Australia Constitution Act the people in government have been 'misbehaving'.
The British colony called Australia is literally a laughing stock of the legal world, where the people sitting in the courts practice deceit and fraud against the people of this country.
The people in the office of the highest court in Australia, that being the High Court of Australia have been deceiving the people of this country at least since 1973.
'Only' after 115 years after the enactment of the 'Commonwealth Constitution' (for short), in 2016 a senator, Rodney Culleton woke up to the fraud committed by the people in office against the Australian people.
Let's see how these people will get away with their criminal actions.
You can download the letter, dated 23 March 2017, Senator Rodney Culleton sent to:
(Apparently these  people call themseves 'honourable' whereas we see evidence to the contrary)
at:
https://drive.google.com/file/d/0B21_coIgIYu2T0ljNE1NeXFmR28/view?usp=sharing
Hats off Rodney Culleton for exposing the corruption of the people in government in Australia.
Posted by AuCorp at 1:55 PM 2 comments: