Holden get $275m from the government

A $275 million taxpayer lifeline will save GM Holden from shutting down its 156-year-old Australian operations and secure its car-making operations at least until 2022, the federal government says.

Holden has agreed to spend more than $1 billion to ensure it continues to provide jobs in Australia designing, engineering and building cars until at least 2022.

"This funding is not a handout - it is a strategic investment that will boost our economy, foster innovation, build new business opportunities and promote adoption of new fuel-saving and safety technologies," Prime Minister Julia Gillard said in Canberra on Thursday.

The Australian car maker, owned by General Motors of the US, had indicated to the government 12,000 jobs could be shed if there was no government support. It estimates $4 billion will be injected into the economy over the life of the new vehicle program.

As well, the federal and Victorian governments are going to provide $35 million to help auto parts companies break into the global market and supply other industries such as mining.

Industry Minister Greg Combet said without the deal Holden would "most likely have closed its Australian manufacturing operations".

The new cleaner and greener models - the design of which Holden has yet to disclose - will bring "economic, environmental and innovation benefits", he added.

South Australian Premier Jay Weatherill, whose uncle worked for Holden for 50 years, said he had a message for the Holden's workers: "We've secured your future."

However, asked whether the company - which shed 100 jobs at its SA Elizabeth plant earlier this year - would cut more workers in the future, managing director Mike Devereux could not give any guarantees.

"If you can tell me what the Australian dollar is going to be seven, eight, nine years from now, what all of my competitors are going to do in terms of launching cars, how many cars might be sold in Australia, what interest rates are going to be, I might be able to tell you how many vehicles I would be able to produce and therefore how many employees I might have," he said.

But in the short term the company had a "pretty strong business model", he said.

Mr Devereux also said Holden would look at ways of using its Australian operations to connect with and enter new markets in China, India and ASEAN nations.

"What we've sought is a product guarantee from them, which we've got," he said.

"And the only thing that determines whether you've got jobs is how well the product is received in the marketplace."

As the federal coalition reviews its industry support policy to find spending cuts, Mr Devereux said industry and government "co-investment" is critical to the future of the car industry.

"Australia does not compete on a level playing field, and without co-investment this country would struggle to attract new capital investment," he said.

Australian Greens MP Adam Bandt says any funding for Holden should be conditional on the car maker producing electric vehicles.

Opposition industry spokeswoman Sophie Mirabella said there hadn't been a cost-benefit analysis, and it wasn't clear where the money was coming from or the criteria under which it was granted.

"It is policy on the run - it is shambolic," she said.

Mr Combet told reporters the final contract with Holden, which is yet to be signed, would indicate the program's exact financial impact on the federal budget over coming years.

Another scam that the mass media is keeping a lid on.

The monies are going straight into the coffers of the unions.

Posted by AuCorp at 9:18 PM No comments:

TED Baillieu is setting up a new razor gang to slash public service costs as the state's financial liabilities soar by $10 a day for every man, woman and child.

The gang will seek savings across the public sector without touching frontline workers such as nurses, teachers and police.

The Government is scrambling to balance the books and contain debt. It has ruled out lifting taxes, fees or fines above inflation.

Premier Baillieu said his taskforce would look to the private sector and other governments for better ways of delivering services.

The Government yesterday released its mid-year report, which detailed an operating deficit of $341 million as of December.

But it predicted a surplus of $148 million by the end of the financial year, thanks to the arrival of delayed grants from Canberra and land tax income.

"The debt is increasing because Labor's infrastructure commitments were unfunded," Mr Baillieu said.

Net financial liabilities soared by $10 billion in the six months to December - a rise of $10 a day for every Victorian - to a staggering $51.4 billion, largely due to a $6.5 billion increase in superannuation liabilities.

Revenue from stamp duty on property sales was down $360 million last year compared with 2010.

Despite the gloomy indicators, Mr Baillieu said he did not believe Victoria was heading for recession.

"(Now is) not the time to be laying off more public sector jobs and withdrawing that spending power from struggling regional communities," Ms Batt said.

Watch taxes go through the roof, as the sector's jobs decline and overworking current employees without financial reward occurs across the board.

Another government scam, that is putting employees into slavery, for the fear of loosing their jobs instilled by the employers.

VICTORIAN health workers' union fees were misused including to fly officials and their spouses to a wedding, an investigation has found.

During a spending spree of unauthorised payments, union officials also gave $5000 to a colleague so she could campaign for US President Barack Obama.

The report says in 2008 Mr Jackson authorised $5000 of union funds to be paid into colleague Alex Hicks's personal bank account "because Ms Hicks was campaigning for Barack Obama in the United States of America".

FWA also found HSU funds were used to pay for airfares and accommodation for Mr Jackson, Mr Hudson and their spouses to attend a colleague's Sydney wedding in 2008.

The report says during an interview over the spending, Mr Jackson said it was "appropriate" for the HSU to pay for an official's spouse to travel to a wedding of a union employee.

Dozens of other examples of broken rules are laid out in the FWA report, tabled by a Senate committee yesterday.

Mr Jackson told the Herald Sun last night he was "grateful" it had been released so former colleagues' claims could be tested in the Federal Court.

He said his enemies in the union movement ran a political campaign against him, and he would contest claims in court rather than through the media.

The Herald Sun was unable to contact Mr Hudson.

The FWA investigation is one of two into the HSU, and took almost three years to complete.

The other investigation involves embattled Labor MP Craig Thomson and is looking at allegations his credit card was misused to pay for prostitutes when he was HSU national secretary.

Opposition workplace relations spokesman Eric Abetz said the report provided an "insight" into union abuse of workers' money and should be referred to the tax office, Victoria's fraud squad and the Director of Public Prosecutions.

Another government sponsored fraud, that the 'authorities' are letting slip by them. 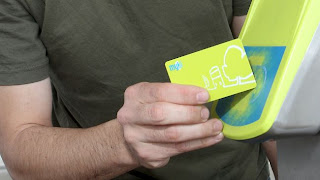 THE Baillieu Government's biggest secrets could be busted open by court action.

Greens MP Greg Barber has taken the Government to the Supreme Court, seeking release of the secret review of myki by consultant Deloitte.

After the report the Government did an about-face and decided to keep the fare smartcard.

Mr Barber sought a copy of the Deloitte report through the Legislative Council, which moved a motion requiring it to be tabled.

But Treasurer Kim Wells declined to release the document because it was prepared for Cabinet decision-making.

The report sought by the Council's order was prepared for the purpose of submission for consideration by a committee of Cabinet, Mr Wells said in a letter responding to the original demand for documents.

As such, the Council does not have the power to require the production of the document.

In his affidavit, filed at the Supreme Court yesterday, Mr Barber said there were no sessional orders of Parliament setting out a procedure to deal with the Government's refusal to release the report.

An order dealing with claims of executive privilege was no longer in force, he said in the affidavit.

Outside court, Mr Barber said the ramifications could go beyond the secret Deloitte report.

"This is not just about myki, it's about smart meters, the desalination plant, secret deals with coal companies and anything that governments assert that they can withhold from the Parliament and the people of Victoria," Mr Barber said.

"This case is about the information that the Parliament, standing in the shoes of the people, needs in order to hold the Government to account.

"Without information, our democratic system ceases to function.

"I can't comment on the detailed legal arguments, as that is what I have asked the courts to adjudicate on."

Another cover up of fraud, money for mates deals, irrespective of what documents exist.

A farce in the face of the masses.

A MAN and a woman are in hospital after their motorcycle collided with a car on a busy inner city intersection.

The incident happened at 9.30pm on the corner of Lygon and Princes St, Carlton.

The motorcycle was travelling south along Lygon St when it slammed into the car, injuring the male driver and his female passenger.