Global warming is now such a serious threat to mankind that climate change experts are calling for Second World War-style rationing in rich countries to bring down carbon emissions. 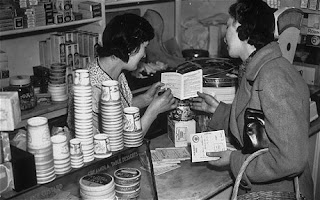 In a series of papers published by the Royal Society, physicists and chemists from some of world’s most respected scientific institutions, including Oxford University and the Met Office, agreed that current plans to tackle global warming are not enough.

Unless emissions are reduced dramatically in the next ten years the world is set to see temperatures rise by more than 4C (7.2F) by as early as the 2060s, causing floods, droughts and mass migration.

As the world meets in Cancun, Mexico for the latest round of United Nations talks on climate change, the influential academics called for much tougher measures to cut carbon emissions.

In one paper Professor Kevin Anderson, Director of the Tyndall Centre for Climate Change Research, said the only way to reduce global emissions enough, while allowing the poor nations to continue to grow, is to halt economic growth in the rich world over the next twenty years.

This would mean a drastic change in lifestyles for many people in countries like Britain as everyone will have to buy less ‘carbon intensive’ goods and services such as long haul flights and fuel hungry cars.

He said politicians should consider a rationing system similar to the one introduced during the last “time of crisis” in the 1930s and 40s.

This could mean a limit on electricity so people are forced to turn the heating down, turn off the lights and replace old electrical goods like huge fridges with more efficient models. Food that has travelled from abroad may be limited and goods that require a lot of energy to manufacture.

“The Second World War and the concept of rationing is something we need to seriously consider if we are to address the scale of the problem we face,” he said.

Prof Anderson insisted that halting growth in the rich world does not necessarily mean a recession or a worse lifestyle, it just means making adjustments in everyday life such as using public transport and wearing a sweater rather than turning on the heating.

“I am not saying we have to go back to living in caves,” he said. “Our emissions were a lot less ten years ago and we got by ok then.”

The last round of talks in Copenhagen last year ended in a weak political accord to keep temperature rise below the dangerous tipping point of 2C(3.6F).

This time 194 countries are meeting again to try and make the deal legally binding and agree targets on cutting emissions.

At the moment efforts are focused on trying to get countries to cut emissions by 50 per cent by 2050 relative to 1990 levels.

But Dr Myles Allen, of Oxford University’s Department of Physics, said this might not be enough. He said that if emissions do not come down quick enough even a slight change in temperature will be too rapid for ecosystems to keep up. Also by measuring emissions relative to a particular baseline, rather than putting a limit on the total amount that can ever be pumped into the atmosphere, there is a danger that the limit is exceeded.

“Peak warming is determined by the total amount of carbon dioxide we release into the atmosphere, not the rate we release it in any given year,’ he said. “Dangerous climate change, however, also depends on how fast the planet is warming up, not just how hot it gets, and the maximum rate of warming does depend on the maximum emission rate. It’s not just how much we emit, but how fast we do so.”

Other papers published on ‘4C and beyond’ in Philosophical Transactions of the Royal Society A warned of rising sea levels, droughts in river basins and mass migrations.

Apple is being sued over allegations that iPhone and iPad applications send users' personal information to advertising companies without their consent.

The complaint was filed in California on December 23 and is part of a class action-style suit.

It accuses Apple of encoding iPhones and iPads with devices that allow advertisers to track what application users download and how much they use them.

The suit claims that the Apple products are set with a Unique Device Identifier, or UDID, which cannot be blocked by users, Bloomberg reports.

Yet Apple says it does not allow data to be transmitted from its App Store without users' permission.

The suit has been filed on behalf of a man called Jonathan Lalo who claims the transmission of personal information is a violation of federal computer and privacy laws.

Applications including Paper Toss, the Weather Channel and Dictionary.com have been named as defendants alongside Apple.

Anyone who downloaded an application on their iPhone or iPad between December 1, 2008 and last week is eligible to join in on the lawsuit.