If the saying "liar liar pants on fire" where to be taken literally, then that would explain Australia's current bushfires, as the country is run by lying "rascals and outlaws", as China put it so eloquently, but erroneously referring to the general population rather than the colonialists in government.
The best part about it is that they don't care about being exposed, because you (the pesky serfs) cannot do anything about it where they will continue to receive the fat government salaries and later pensions.

But if you do not pay your fine, from a flawed legal procedure, they take your sh!t from you.

See article from 15 Jan 2020 by The Guardian of the headline: 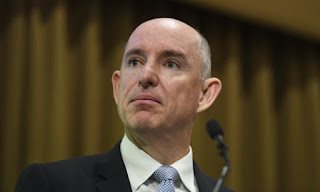 NDIS minister claims no one has died waiting for the scheme, despite agency revealing 1,279 deaths

Stuart Robert told 2GB ‘no one has passed away waiting for the NDIS’ despite the National Disability Insurance Agency saying 1,279 people had died. Photograph: Lukas Coch/AAP

The government minister who runs the NDIS has claimed no one has died waiting for the scheme, despite the agency saying more than 1,200 people have died before they received a scheme plan and the prime minister describing those same figures as “unacceptable”.

But quizzed about the figures, which were first published by News Corp on Wednesday morning, Stuart Robert told 2GB they were “not even remotely correct” and that “no one has passed away waiting for the NDIS”.

“The reporting today that people have tragically passed away, the fact that they’ve passed away of course is correct, but no one has passed away waiting for the NDIS,” Robert said.

“Those figures are from July 2016 through to mid-2019. From three and half years old to six months old.”

Robert said that those who had died “were people who were getting support from the states and territories as they transitioned to the NDIS”.

The radio station 2GB subsequently reported that Robert had “denied reports more than a thousand people have died waiting for packages” and quoted him saying “no one has passed away waiting for the NDIS”.

Although those who received state-funded disability supports continued to benefit from them while the states and territories were transitioned onto the scheme, the individual-needs-based funding provided under the NDIS is praised by the government and disability groups as tailored and generally more generous.

Guardian Australia asked Robert’s office how it was true that “no one had passed away waiting for the NDIS” when the agency itself had said that 1,279 people died after making an access request and before receiving a plan.

His spokesman said: “The Minister was referring to the fact that the NDIS was designed to ensure people with disability transitioning to the new Scheme from state or Commonwealth programs over the last three years continued to receive their existing disability-related supports until participants received an approved NDIS plan.”

Pressed if he had misspoken, and also whether he stood by the claim that the figures provided by the agency and published by News Corp were “not remotely correct”, the spokesman added: “The Minister does not dispute the figures his own agency has provided, he disputes how they were framed in today’s media.”

Of the 1,279 people who died waiting for an NDIS plan, 369 died in the first nine months of 2019. The full scheme was operational in all states in July 2019, according to the figures provided to Senate estimates.

The 1,200 who died before they received an NDIS plan included 35 children aged under six and 30 children between the ages of seven and 18.

Asked about the figures at a press conference on Wednesday morning, Scott Morrison did not dispute them, but said the government had adopted measures that were successfully reducing waiting times.

But he added: “My answer to that is yes, I think that was unacceptable.

“I should stress that during that time it was also during a very significant ramp-up of the transition of people from state-based services to commonwealth services.”

The National Disability Insurance Agency declined to comment, referring inquiries to the minister’s office.
Posted by AuCorp at 10:18 AM No comments: 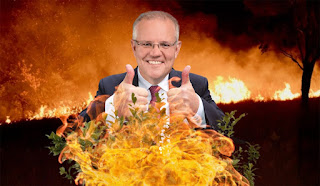 If you never thought politicians do not give a stuff about the tax slaves that fund their holidaying lifestyles, then the proof is out from Australia’s current (it might change next month) PM.

So, let’s back track a bit.

A while ago, the speaker of the house, Bronwyn Bishop stated on the ABC television show Q&A, that “the first job of a government is to look after the safety of its people”.

This statement no doubt jetted over many people’s heads.

Let’s give a simple example for all those wogs, refugees, human rights imports and deadbeat drivers.

The above statement means that the priority of all the people in the ‘family’ is to look after each other, i.e. all those in the family.

Therefore the first job of the ‘Australian Government’ is to look after the safety of those in government, and NOT you*.

The fire, ambulance and police services are part of the government regime.

When two people died at the Kangaroo Island bush fires, when Scott Morrison replied to the death toll, he responded with zero deaths because that’s all he as with others care about, those in government.

Don’t forget how ever many people die in the bush fires, the people in government will just import more tax slaves to prop up their salaries and overseas holiday lifestyles.

That’s the beauty of living in a colony.

See video of Scott Morrison telling residents on Kangaroo Island it was fortunate nobody had died in the blaze that ravaged their communities and killed two locals within post: