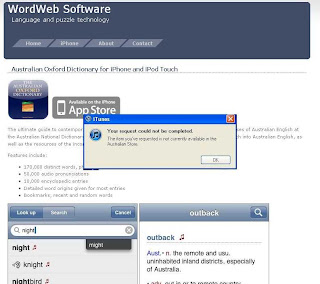 One of many blunders for Apple's App Store, realistically to much to list on this blog, but none the less a typical example is illustrated

has a product called

BUT when one clicks on the App Store the rude message:

"Your request could not be completed"

"The item you've requested in not available in the Australian store."

Quite pathetic in this day and age of computer programming.

Will Apple allow me to buy a dictionary in my language?

Posted by AuCorp at 3:52 PM No comments: 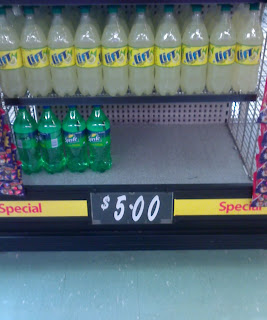 A lot of the time when we hear of the word 'natural disaster' we normally think of devastation and suffering with the real possibility of the loss of life.

Quite often the mass media also focus on the public looting.

But there is also one other important aspect deliberately overlooked.

Some corporation's CEO's rub their hands together, licking their lips with $$$ signs in their eyes and see this as an opportunity of ripping of the public and / or the system.

The illustration was taken by corpau in a town in Queensland NOT associated with the floods at a Woolworths store.

This shows that a bottle of lemonade retails for %5.00 whereas the 'normal' price of the product is approximately 1/3 of the cost illustrated.

In the Woolworths store, there was NO panic buying, with the shelves being stocked as per normal.

The stock that Woolworths received was paid at a certain price before the floods, and according to their procedure should be sold at the normal recommended retail price, in order to realise their 'normal' profit margins.

Woolworths has clearly been profiteering from the floods.

Also it has emerged in the mass media, the Australia's two largest petrol retailers, Coles and Woolworths, are involved in a petrol racketeering scam, that has driven the price of petrol up by 20 cents.

The so called Australian consumer watch dog (ACCC) lies conveniently asleep, to the detriment of the general populous.

Posted by AuCorp at 2:39 PM No comments: 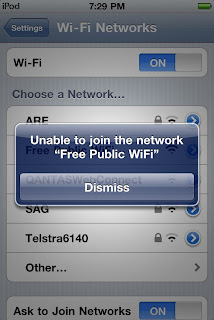 An all too common image of the alleged "Free Public WiFi" hotspot available at Australian Airports.

Australia has VERY little 'free' hotspots that one can use to keep in contact with others via their portable electronic devices such as ipods, PDA's etc.

Only a few global companies like McDonalds offer 'free' WiFi, but technically you have to purchase some of their JUNK FOOD in order to use the connection.

Australia's telecommunications 'monopoly' is stifled by Telstra, which is responsible for one of the highest calling rates in the world.

Data communications rates and plans are also the most expensive in the world.

The government body for consumers (ACCC) has done very little in order to stop profiteering by Telstra, even though Telstra is apparently highly regulated by the ACCC.

The politics is deliberate, i.e. to rip the consumers of in terms of service, and charge a premium for it.


A typical example for Australian shopping centres (malls) is to provide the consumer with expensive internet connections at approx. AU$6 per hour. 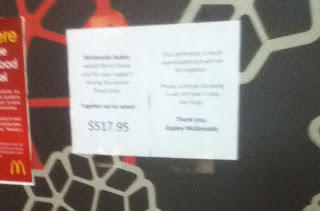 Their food ultimately makes you obese, has little nutritional value yet ironically McDonald's has set up Ronald McDonald House which cares for the families of cancer stricken children.

In recent events in Queensland, Australia, there has been major flooding, in the lower lying areas of Brisbane, from the authorities lack of pre - torrential rain releasing of the Wivenhoe dam.

As a result some suburbs have seen flooding, as well as the city's Central Business District close to the Brisbane River.

At the time of this post, North Queensland is currently being ravaged by tropical Cyclone Yasi.

In the illustration show a photo of a McDonald's store that has donated AU$517.95 to the victims of the floods.

An interview with a McDonald's employee has indicated that a McDonald's store takings is in the vicinity of AU$25,000 in ONE day.

The above illustration shows that Macca's total relief for the flood victims is 2% of a days takings. A small contribution compared to a day's takings let alone an entire weeks worth.

McDonald's also purchases water for their soft drink products from the Australian government at $1.40 per one million litres.

Posted by AuCorp at 9:31 AM No comments:

Apple has been hit with another lawsuit accusing it of privacy violations for the way it shares information collected from iPhone, iPad, and iPod touch users with advertisers.

The suit was filed last Thursday on behalf of an Apple user in California and seeks class-action status. It charges Apple with sharing information about users’ browsing history, application use and other personal details without their consent.

“Apple’s privacy policy is opaque and confusing but one thing is clear: it does not inform mobile device users that by providing application developers with their UDID, Apple enables them to put a name to highly personal and in many cases embarrassing information derived from app downloading activity and usage, and internet browsing history, that would otherwise be anonymous,” the suit reads.

Apple gives each of its mobile devices a Unique Device Identifier, or UDID. Application developers have access to that number, which offers information about a user’s browsing history every time the user clicks on an ad or an application, according to the suit. Developers sometimes sell the data to tracking companies, the suit alleges.

The suit cites a Wall Street Journal article from December that says developers can combine the UDID with other personal information found on the device including user name and password, contacts, current location, and in some cases the phone owner’s name.

It also cites a study by the director of information security and networking at Bucknell University, which found that many applications collect the UDID number and user login data that ties to a user account. He also found that many apps transmit the UDID back to a server owned by the app developer or an advertising partner. The suit claims that “such entities inherently have the ability to tie a UDID to a real-world identity,” although it doesn’t describe why they inherently have that ability.

Apple didn’t reply to a request for comment Monday. In December it told the Journal that iPhone apps are not supposed to transmit data about a user without the user’s prior permission and explaining how the data will be used.

The suit notes that Apple’s privacy policy says that personal information will be shared by Apple to improve services and advertising but that it won’t be shared with third parties for their marketing purposes.

Filed in the United States District Court for the Northern District of California, the suit asks for a jury trial and for compensatory and punitive damages related to 10 charges. The charges range from invasion of privacy to violations of the Stored Communications Act.

The plaintiff wants the class to include all Apple customers in the U.S. who have downloaded and used apps on the iPhone, iPad or iPod Touch after July 10, 2008.

It’s not the first suit of its kind. Another was filed against Apple last year, also in California.

In recent events the world has seen the 'official' political witch hunt of Julian Assange, who through his site publish classified government information.

There is clearly a one sided approach that information held by corporations / governments is sensitive, whilst individual's information can be gathered by all businesses / authorities concerned.

These are all deliberate steps taken to build databases on EVERY individual on the planet.

An age of Digital Slavery.