MELBURNIANS have been urged to embrace flexible working hours by VicRoads in a bid to fix the congestion crippling our roads. 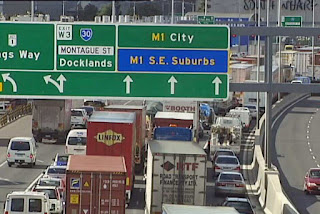 As motorists battle the worst week of the year for traffic, VicRoads said it was doing all it could to reduce snarls, including providing information about travel conditions and giving priority to certain transport types.

Melbourne has long been regarded as Australia's worst city for traffic jams, and long touted as one of the world's worst.

Despite this on any given day the authorities or various 'independent' sources claim that Melbourne is the world's most livable city. Another lie perpetuated by the authorities.

Traffic jams now can span 30 kilometres (18.5 miles) during peak hour on major arterials, with queues up to 5 km long in the suburbs.

It has been estimated that standstill traffic consumes an approximate $5 billion in fuel, a welcome bonus for the petrochemical giants but a deep cut into the wallet of the average citizen.

There is no policy to alleviate traffic congestion, even though town planning engineers were brought out from Germany to assess the traffic problems in Melbourne. Once their suggestion were given, they were shipped back to Germany on the first flight home, as the answers were not what the authorities wanted to hear.

Information obtained by corpau from within the industry indicates that the policy is to work in the rears and not for future development and catering for the growing population.

Australia is truly a backwards country when it comes to infrastructure projects.

The population is now told to adjust their lifestyle as a result of government failure.

Posted by AuCorp at 2:45 PM No comments:

One in 13 drivers commit an offence

A POLICE operation in St Kilda this weekend found one in 13 drivers committing an offence.

A 35-year-old Bacchus Marsh man was charged with offences including drink driving, stating a false name and address, being a suspended driver, soliciting for prostitution and failing to have headlights on;

A 32-year-old Elwood man drink driving returned a reading of .189; and

It caught a teenage girl, who has been licensed for only three weeks, drink driving after she was pulled over in her mum’s car on High Street, Northcote, about 5.54am.

She was one of 11 drivers caught behind the wheel over the alcohol limit or with drugs in their system.

A man’s driving licence was suspended immediately after he returned a alcohol reading of .126.

He is expected to be charged on summons for drink driving and failing to have an alcohol interlock device fitted to his vehicle.

Victoria Police’s Summer Stay campaign will run across Victoria through to January 9.

“Police are urging motorists to stay safe or stay off the road this summer,” Acting Sgt Rosewarne said.

It Australia, the politics is to give out licenses.

Anyone with the least bit of driving skills or coordination is able to obtain a license, paying special attention to overseas migrants with little vehicular control history.

License instructors are easily bribed, and newly appointed migrant instructors give away licenses to the applicants of their country's origin.

Quite simply put trash drivers on the road turn an entire industry, from insurance companies to the automotive repair trade, which as a result turns over many millions of dollars annually at the expence of the general populous.

Posted by AuCorp at 2:20 PM No comments:

Honda has aired on Australian television an advertising campaign that is misleading the general populous.

In the television commercial, a green Honda Civic hatch is portrayed in city driving conditions next to other cars (and people) with parachutes, signifying wind resistance is what is slowing down all objects excluding Honda’s Civic (drag coefficient, Cd 0.30). 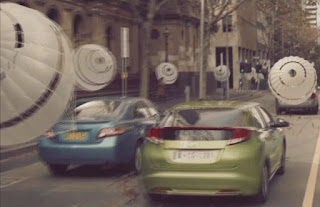 Pictured also is the  2012 model Toyota Camry, which according to the manufacturer has a drag coefficient (Cd) of 0.27, or or 10% better than the Honda. Incidentally Toyota’s Prius is rated at 0.25.

The claim is made that city driving in other vehicles uses more fuel compared to the Honda’s Civic, which is misleading.

In city driving it is rare to see speeds in excess of 40km/h (25 mph), where the norm is walking pace or even slower during peak periods.

It can be argued that wind resistance come into play over a certain speed, but the reality of the situation is that any alleged fuel savings made on a city trip can easily be negated by a lengthy delay at traffic lights, or by even the use of the car’s air conditioner.

This is just one example of many that corporations are misleading the masses in order to obtain sales of their products, which under Australian law is illegal.

The so called watchdogs are not in any hurry or have any vested interest to kerb false or misleading advertising by the corporate giants.
Posted by AuCorp at 1:52 PM No comments: