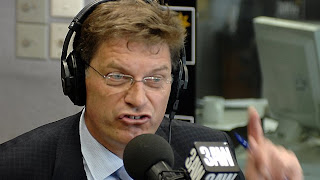 PREMIER Ted Baillieu's office is under fire after critical remarks from a talkback caller were deleted from the official transcript.

The caller accused Mr Baillieu of avoiding tough questions, and challenged him to "be a man".

But when the transcript of the airwaves encounter appeared on the taxpayer-funded website premier.vic.gov.au the criticism had vanished.

Instead, the transcript listed the question as "inaudible" - despite it being clearly understandable on recordings of the interview by the State Parliament library.

During the interview, 3AW listener Brendan phoned Neil Mitchell to say he had "one statement and one question".

"Ted, you're no different to every other premier," he said. "You only answer the questions that you want to answer.

Why can't you stand up and be a man and just say 'Yes' and 'No' and give us the real facts instead of pussyfooting and dancing around? It's just unbelievable."

Mr Baillieu's spokesman, Paul Price, said the comments had not been deliberately omitted.

Mr Price said a Government media adviser recorded the February 3 interview on a digital device at the 3AW studio but the caller's comments were not clear.

He said the recording was given to a staffer in either the Premier's office or the Department of Premier and Cabinet, to be typed into a transcript and published online, but the caller's comments were deemed "inaudible".

"We don't tamper with transcripts," he said.

"At any of the doorstops we have, the Premier is often the focus of negative commentary and that is spelled out directly in transcripts.

"This was just a function error of the audio that was taken on the day."

Mr Price also denied Mr Baillieu or any of his advisers had ordered editing of the transcript.

The premier.vic.gov.au website is Mr Baillieu's official website, which records his speeches, publishes his media releases, provides his contact details and contains transcripts of press conferences and media interviews.

Opposition Leader Daniel Andrews accused the Government of intentionally editing out all negative references to the Premier's performance from the transcript before posting it online.

"The Government doesn't have a plan to keep Victorians in work, but has found the time to doctor transcripts to protect the Premier's reputation," Mr Andrews said.

"If the Premier actually started doing some work, maybe he wouldn't be copping criticism."

It is not the first time the Government has been accused of doctoring transcripts.

Mr Andrews claimed in State Parliament last August that the Premier had removed the word "inflation" from the transcript of an ABC radio interview about the Government's wage policy that appeared on the same website.

Greens MP Greg Barber said Mr Baillieu and his Government had "selective hearing and this is only one small example".

"They spend a lot of money printing out every word from the leader that holds him up in a good light," Mr Barber said.

"But then they airbrush the leader to make him look as a guy who never puts a foot wrong."

Another lies perpetuating from the mouths of politicians.

Trying not only to distort the truth but also rewriting history as to the actual events that have taken place.

Immediate dismissal should follow such fraudulent presentation of facts.

Botton of the class for Aussies students

More dollars but less sense training our teachers and kids

AUSSIE high school students have fallen up to two years behind Asian students in reading, maths and science.

Poor teacher training is blamed for the staggering divide.

"If a kid (in Australia) is that far behind (in a classroom) we would consider him disadvantaged. They would likely be put into the remedial class," said researcher Dr Ben Jensen, director of the school education program at the Melbourne-based think tank the Grattan Institute.

Its report, Catching up: Learning from the best school systems in East Asia, reveals Australian high school students are more than two years behind Shanghai students in maths and 15 months behind in science.

We trail Shanghai students by 13 months in reading and are also significantly behind Korea, Hong Kong and Singapore in key learning areas.

Researchers say that a huge increase in education spending - 44 per cent in the past decade - has been wasted because it failed to invest in making our teachers better.

Nor did universities properly train new teachers for the pressures of the classroom. "Being nearly two years behind (Shanghai) is staggering. It really is a long way," Dr Jensen said.

He said individual teachers were not to blame, because their training was not up to scratch. The answer lay not in hiring more teachers, but in more effective ways of helping students learn.

"Other Asian countries are constantly working out ways of how kids can be better taught. We don't," he said. "The main difference is (teachers overseas) are trained as researchers and they are continually trying new things with children's learning. If it has been successful, they keep it."

Dr Jensen said though spending in education had drastically improved, it was being diverted to new buildings and schools.

"The OECD and the World Bank are very clear that the most important economic reform is improving student performance."

US and UK students fare even worse than our own, with both nearly three years behind Shanghai students in maths.

Another indication that educating the children of the masses is NOT a government priority and never will be.

Education is still kept in the hands of the ruling elite, whereas blue collar education and a focus on sport is giver to the children of the masses.

With a lack of education, the young minds can be easily steered in the direction that is beneficial to the powers at large.

THOUSANDS of high-level security assessments in the Defence Department were compromised by incorrect data that was used by ASIO to issue official clearances.

Many of the compromised clearances remain in place as Defence and the Australian Security Intelligence Organisation wade through thousands of reports to remove incorrect data.

So far, about 3100 high-level clearances have been validated from around 5300 applications made before whistleblowers lifted the lid on poor work practices.

The Inspector General of Intelligence and Security, Dr Vivienne Thom, slams Defence management, and particularly the Defence Security Authority, for the huge breach, and she makes 13 recommendations to fix the problems.

Defence has accepted all of them. 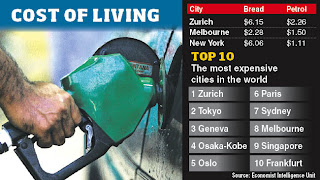 MELBOURNE might be the world's most livable city, but research has found it is almost 50 per cent costlier than New York.

The strong dollar is being blamed for squeezing Aussie wallets, with five of the nation's capitals ranked more expensive than destinations such as London, Hong Kong and Berlin.

Melbourne was named the eighth most expensive city, one place behind Sydney, in the Worldwide Cost of Living Survey.

The survey found the cost of a loaf of bread in Melbourne almost doubled in the past decade, while petrol prices rose three-fold and rice almost quadrupled.

Report editor Jon Copestake said the cost of living in Melbourne was up dramatically compared with 10 years ago when it was more than 25 per cent cheaper than the Big Apple.

"Exchange rates have been the greatest influence, with the Australian dollar seeing its value relative to the US dollar double," Mr Copestake said.

"The cost base does tend to increase when that happens," Mr Bloxham said. "In some ways, it's the cost of success."

"And then, of course, the strength of the Aussie dollar is also meaning that we can afford to buy more things from overseas."

The survey, conducted by the Economist Intelligence Unit, compared the price of 160 products and services in 130 cities.

In a separate study, Melbourne rated best in the nation in the world's top 50 university cities.

Another report from credible sources, that puts Melbourne in the list of the most expensive cities to live in the world.

Politicians lawmakers and fianciers are responsible for the financial climate of the nation.

If the report is to be believed then this is an assault on the average citizen to put them into financial slavery at the mercy of the banking elite.

High unemployment, large unskilled migrant labour influx, together with a lack of infrastructure compounds to the daily struggle that Melbournians face.

A direction that is tightly controlled by the ruling elite. 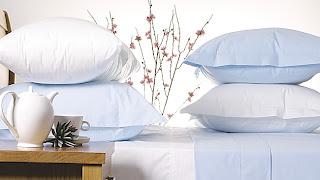 The $10,000 welcome pack for asylum seekers who wait for their refugee claims to be processed.

Wardrobe, if none built in

Iron and ironing board


CAN BE ASKED FOR


ITEMS WHICH CAN BE APPROVED

iPod or other music storage device