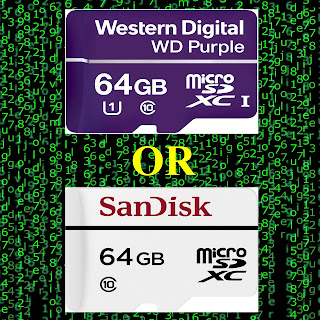 On the 11th day of April 2018 the corporation Western Digital announced a new line of surveillance storage microSD cards that being the WD Purple, of capacities 32GB and 64GB, in line with the nomenclature used with their hard disk storage solutions.

Following that announcement it would be a great idea to bring a detailed test report to our readers, so off we go to the local technology wholesaler, but alas no stock, as they have not made it down to the British penal colony called Australia.

So the next best thing would be to do a product comparison from factory specifications, for the mathematically challenged. 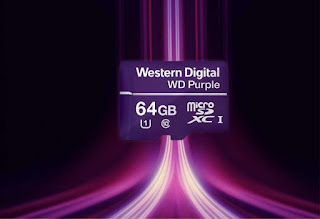 According to wdc.com their microSD card is rated at 80MB/s read and 50MB/s write performance.

The endurance rating of the 64GB card is up to 64 TBW (Terabytes Written).

According to SanDisk.com their High Endurance video monitoring microSD card of 64GB capacity is good for 10,000 (ten thousand) hours of recording at Full HD, in line with their nomenclature used in their hard disk line of storage solutions.

The read and write speed of the card is rated at 20MBps.

While the purple card is quicker in both read and write, the white card has an endurance rating of 1.8 times the new purple one.

Posted by AuCorp at 9:46 PM No comments:

LinkedIn is another corporation that should be in the courts if not at least in Australia, but also other jurisdictions, e.g. the U.S and E.U.

Under Australian consumer law, LinkedIn is implementing something called unconscionable conduct or another version of deception or fraud.

The way LinkedIn is doing this is by deliberately hiding text when a user sets up an account with LinkedIn, something that the industry calls Dark Patterns.

Let's see how long the Australian authorities will take to catch on.

It took 2 years for the Australian authorities to act on a post we posted regarding Domain name fraud.

It seem there's not much interest in protecting the Australian consumers (or rather data providers), as it's better cheaper for corporations, that the slaves compile and later provide their data to corporations for 'free'.

We do not recommend using LinkedIn.

Posted by AuCorp at 7:18 PM No comments: