How to deal with the new Australian piracy law 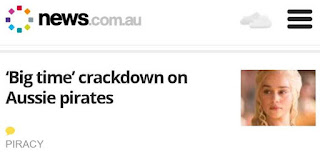 This comes literally straight after the peasants were made aware that people in government are defrauding their slave population on a huge scale, more damage than any single 'pirate' ever could do.

So apparently Australia is full of pirates (the "haaar haaar mi maties", type), where one could say that all of them are in government.

"Why's that?" could ask the beer gut footy lover.

'Cause they're not in office lawfully, nor the company called the 'Australian Government' is the de jure government of the people, as described in a document called 'An Act to Constitute the Commonwealth of Australia' which can be referred to as the Commonwealth of Australia Constitution Act, which is a set of rules for the people in 'government'.

The above mentioned original Act with the proper seal can be downloaded at:
https://drive.google.com/open?id=0B21_coIgIYu2b2xFTWY0NURERkU

So, you've been accused of a criminal act, an act of piracy they allege.

You being the astute computer user connected to the internet, use your favourite search engine  (Ford 351 Windsor?) and upon your search query you find that you are pointed to a law called the Piracy Act 11 Will 3 c 7,  at https://en.wikipedia.org/wiki/Piracy_Act_1698.

You have no access to any wooden ship, sword, frilly shirt and you most certainly do not have an eye patch, and are traveling in a fully abled body.

So WTF is this 'piracy' they're on about.

So therefore these people from over the seas are discriminating against you because of your geographical location or is it that because you live in a colony of the British empire?

So anyway, what is this law they're talking about?

Really, Really briefly; prior to a thought written down on paper becoming a law (Act) the one step lower paperwork is called a Bill, as shown in the illustration below: 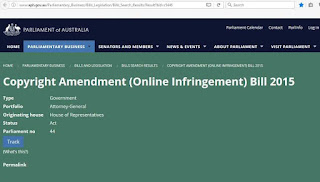 Now, in order for a (this) 'Bill' to become law it must obtain 'royal assent' and a few other bits and pieces come into play of that darn thing called paperwork.

We've been shown the reasons why this new law is not actually lawful (as opposed to legal).

Nevertheless in ANY criminal matter, you have the right (and should exercise that right) not to self incriminate, therefore you cannot answer any questions with regards to any accusation of 'piracy' (whatever that means), nor any admissions that your person carried out any actions relating to the operation of any alleged computer equipment.

Have you got the skills to prove that the Copyright Amendment (Online Infringement) Act 2015 is unlawful?

'Australians ready to revolt' sentiment to be crushed by overwhelming police force? 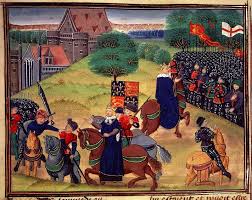 
In a lecture headed by Noam Chomsky in 1989 of the title The Political Economy of the Mass Media - Manufacturing Consent, available for download at https://www.youtube.com/watch?v=f6JqFtDWfxI (1hr27m, 230MB), Chomsky mentions how two events seem rather remote from one another, whereas in reality you can tie them together to get the bigger picture of an agenda at play.

Over one month ago, in early December 2016, the mainstream media reported that the Government of Victoria is going to recruit approx 3000 extra police in order to combat a rise in violence.

The 'rise in violence' was created by the corporation conglomerate called the government, as it was a result of the government importing a migrant population that has (deliberately?) turned to crime.

Meanwhile, the people in government have created laws and 'loop holes' (pity there are not loop holes for an unlawful 'speeding fine') that allow them an 'age of entitlement' literally for the rest of their lives, even if they are expelled from government positions, as a result of fraud or theft.

So while this is occurring there is a huge financial drain from criminal trash element with the politically correct label of 'refugees' the government has let into the country on the social security purse.

As a result the underprivileged, weak and vulnerable are having their payments cut by the people in government, in order to balance the books for the arrival of the criminal element to be paid welfare payments.

To add further insult to injury, the government has implemented a computer program that falsely states that Social Security recipients owe debts to an organisation called Centrelink.

There are many issues of this type of action being unlawful which are mentioned in the blog post of the headline:
Pay or face the debt collector - what Centrelink the government or the media will not tell you, at
http://corpau.blogspot.com.au/2017/01/pay-or-face-debt-collector-what.html

While the above mentioned events may seem to be remote from one another, they are very closely related, as these actions and policies are carried out by a small group of people in government in order to oppress the masses.

One would not have to be an 'Einstein' or 'Rocket Scientist' to figure out that the serf / tax slave / herd population will have enough.

Warning: Conspiracy theory following;
It could be very easily perceived that the 'government' was fully aware that the people are fed up with the criminal actions of the people in the executive, and the government has prepared a police force to deal with any 'revolt' or rather insubordination of the slaves, under the 'extra police to protect you' banner.


So how again are these actions by the people in government for 'peace, order, and good government' (Australian Constitution Act 1900) ???

Is the only reason Sussan Ley going to allegedly give the funds back is because she got caught?

How can you really trust the people in the executive with 'our' tax dollars?

There is a whole lot more who have not been caught out.

Will she face charges of theft?

Let's see what Australia's finest law enforcement agency will do?

In the mean time here's a meme: 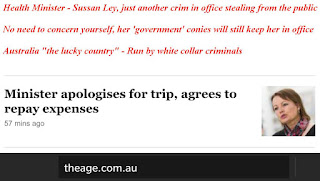 In Australia you can go to prison to lose your life for not paying a fine, where theft from the public purse is rewarded with a big fat pension.