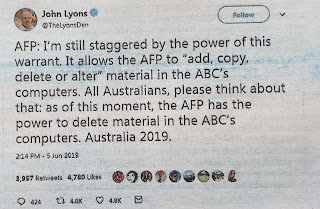 Australia is a dangerous place for journalists, whistleblowers (i.e. people exposing corruption or criminal activity by those in position of authority), as well as for the general population otherwise known as the 'public' or more accurately the serfs.

With the recent events of the federal police raids on journalists exposing the 'Afghan Files'  where documentation of unlawful killing of men and children occurred by the hands of the Australian Government where they wanted to cover this up, the corrupt courts apparently have issued a carte blanche so called warrant, where those in authority can modify add or delete documentation, in reality tampering with evidence with total impunity. 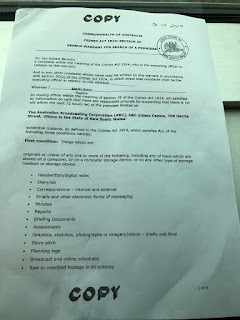 The police state of Australia is in full swing now.