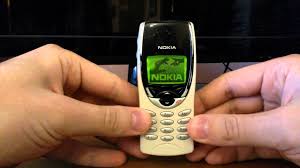 Since Australia is a colony the people in government rule in the appropriate manner, with the mentality from 1788, i.e. keeping the convicts locked up on this prison isle.

Australians do not live in a democracy as 'advertised' but rather in a totalitarian, fascist or authoritarian state depending on your point of view.

The people in the Australian Government are 'human rights' abusers where they get away with a lot with the world just accepting this.

Forcing someone to do something is against a few laws that the people in the Australian Government put in the round file.

As an example, one cannot be forced to use a data collection service for COVID reasons, namely an app.

This is against a Commonwealth law called the Privacy Act of 1988, under Section 94H, which states the following:

Requiring the use of COVIDSafe

(1)  A person commits an offence if the person requires another person to:

(b)  have COVIDSafe in operation on a communication device; or

Penalty:  Imprisonment for 5 years or 300 penalty units, or both.

(2)  A person commits an offence if the person:

(a)  refuses to enter into, or continue, a contract or arrangement with another person (including a contract of employment); or

(b)  takes adverse action (within the meaning of the Fair Work Act 2009 ) against another person; or

(c)  refuses to allow another person to enter:

(i)  premises that are otherwise accessible to the public; or

(ii)  premises that the other person has a right to enter; or

(d)  refuses to allow another person to participate in an activity; or

(g)  has not downloaded COVIDSafe to a communication device; or

(h)  does not have COVIDSafe in operation on a communication device; or

(i)  has not consented to uploading COVID app data from a communication device to the National COVIDSafe Data Store.

Penalty:  Imprisonment for 5 years or 300 penalty units, or both.

(b)  the benefit that the other person derives because of an obligation of the person under subsection (2) is a workplace right within the meaning of Part 3-1 of that Act.

So, on the land where Australia's first police force was made up of criminals (and still is to this day) the authorities have conjured up an idea that mobile phones are mandatory for its residents for the purpose of data collection for COVID reasons.

So summing it up, NSW residents are forced to be owners of a mobile phone in order for the government to monitor their every move, as this is done via A-GPS (Assisted GPS, i.e. mobile phone tower triangulation) and GPS and now WiFi/Bluetooth scanning embedded in the phone's operating system by Apple and Google, actions which are out of your control, and also 'forcing' you to login to premises you have visited. 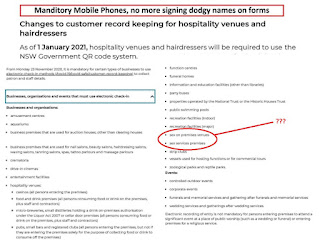 Source: https://www.nsw.gov.au/covid-19/covid-safe/customer-record-keeping/qr-codes
Meanwhile, those in government, do not abide by the law, flaunt the 'rules' and travel unrestricted.
Did you know that the Imperial government had enough of the lawlessness with regards to the people in power of the colonies, that they installed the Colonial Laws Validity Act in 1865 to remind the colonists of the rule of law.
This is still true today, where the people in power pretty much do whatever they please, with little to no consequences if caught, but the serfs do not have the so called protection of the motherland anymore.
All deliberate by design.
Posted by AuCorp at 10:36 AM 1 comment:

Can Victoria Police fine you for not wearing a mask? 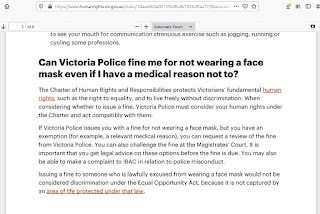 Posted by AuCorp at 6:51 PM No comments:

Why you need a COVID vaccine

if the following occurs: 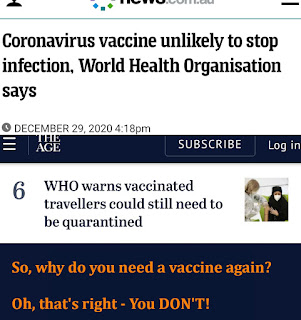 Posted by AuCorp at 2:34 PM No comments: 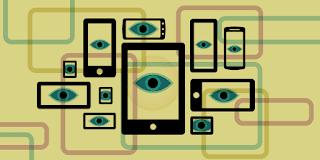 EFF filed a brief in the U.S. Court of Appeals for the Ninth Circuit in support of WhatsApp’s lawsuit against notorious Israeli spyware company NSO Group. WhatsApp discovered last year that NSO Group had breached its systems and enabled NSO Group’s government clients to hack into the mobile phones of approximately 1,400 users in April and May 2019. A federal judge allowed the case to move forward earlier this year and NSO Group appealed.

NSO Group sells its “Pegasus” spyware, which enables surreptitious digital surveillance of mobile devices, exclusively to government agencies across the globe. The company is arguing that it should therefore be granted “foreign sovereign immunity,” a longstanding legal doctrine that says that foreign governments should generally have immunity from suit in U.S. courts for reasons that focus on preserving stability in international relations, also called “comity.”

EFF supports WhatsApp’s arguments that foreign sovereign immunity is inappropriate for private corporations, and submitted our brief to further argue that no corporation, whether foreign or American, should be granted immunity for contracting with foreign governments, especially when those governments use a company’s powerful surveillance technology to violate human rights.

We explained that surreptitious surveillance tools not only invade privacy and chill freedom of speech and association, they can also facilitate physical harm—from unlawful arrest to summary execution.

EFF’s brief provided examples of how NSO Group, via the WhatsApp hack, helped its client governments target members of civil society, including Rwandan political dissidents and a journalist critical of Saudi Arabia. We also highlighted other examples of NSO Group’s complicity in human rights abuses, including many perpetrated by the Mexican government against journalists and the wife of a murdered journalist.

Corporate complicity in human rights abuses is a widespread and ongoing problem, and the Ninth Circuit should not expand the ability of technology companies like NSO Group to avoid accountability for facilitating human rights abuses by foreign governments.