This is only what they've been caught out with:

There is plenty more falsified government data which is not being exposed. 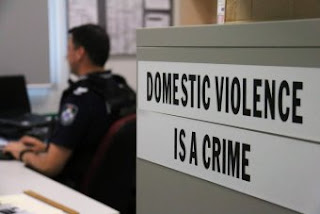 Every week an Australian woman is murdered by her current or former partner and Australian police are at the forefront of that crisis, responding to incidents of domestic violence every two minutes.

But this week a Queensland police officer was stood down from duty after being accused of leaking the address of a domestic violence complainant to her former partner.

Senior Constable Neil Punchard will face court next month after being charged with nine counts of computer hacking.

The Senior Constable allegedly accessed a confidential police database to look up the woman's details then allegedly passed them on to her former partner, who was subject to an ongoing domestic violence order.

Statement from the QLD Police Service:
The Queensland Police Service (QPS) conducted a review into a matter which led to further inquiries being conducted. As a result of this criminal investigation, an officer was issued with a Notice to Appear for nine counts of computer hacking.
The Queensland Police Service holds substantial intelligence and information holdings and takes information privacy very seriously. All members are required to adhere to QPS policy and procedures concerning the access to and use of this information. The QPS provides significant training to all members on the use and access to confidential information contained on QPS databases.
Training on the use of these databases commences with recruit training and continues throughout the member's service. Such training includes online learning products and face-to-face training on how to use the information contained in the databases. Breaches of QPS policy and procedures are subject to a robust internal investigation process. It would be inappropriate to comment further at this time due to matters before the court. 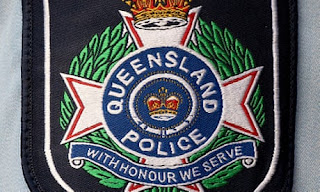 Posted by AuCorp at 9:17 AM No comments:

Governments and corporations are now demonising cash, under whatever pretext the corporations think of this month, in order to gain full access to the tax slaves movements, which then can be used to control their lives.

Apparently now, if you save money for a 'rainy day' (plenty of those in Melbourne), then you're branded with a negative connotation that being of a hoarder. 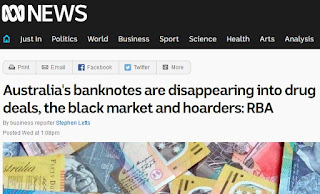 Many humans from the herd population love the (digital) slavery they're in, i.e. being a 'product' that gives data way to corporations for very little reward, like $2 for every 50 litres of fuel purchased, for surrendering their docket, which contains the purchaser's history within that docket.

The forcing of people to go cashless is not for the benefit to those people, but rather government and corporations, although there are many arguments put forward, where convenience is pushed as the main selling point.

Forget about the farcical excuse of security.

You are demonised for hoarding cash, where you are told that it's fine being in the bank, but 'fine' for who?

If you have cash in the bank, you do not own that cash, as it is no longer in your possession, but rather in the possession of the bank.

Then many so called government agencies can take that cash from your person's account name.

Quite simply, if you do not have that cash in the bank, they cannot take it from you.

If you stash your cash under the proverbial mattress, then no one knows how much cash you've saved, meaning they have no control over you in the aspect of your 'savings'.

Australia's ('Big Four') banks use your cash to commit criminal activity where the current royal commission into banking, etc was a farce not exposing the full extent of the criminal activity the banks are involved in.

Cash used in 'street' crimes pales in comparison to the criminal activities by those in government and in corporations.

Getting rid of cash is just another form of total control over the serfs in the colony of Australia.

We do not recommend keeping your cash in someone else's premises, e.g. a 'bank'.

You do realise that it's their (the government's) currency and they want it back.

Posted by AuCorp at 5:57 PM No comments: