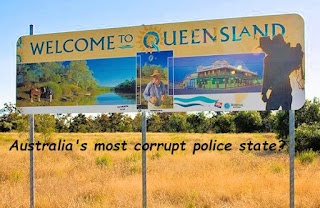 "Welcome to Queensland"
- but just don't get imprisoned by police, 'cause they'll beat you and get away with it.

"Queensland beautiful one day.."
- corrupt as f_ck the next!

You see the 'brotherhood' has taught its members a lesson,  via Rick Flori, in that if you expose criminal actions within the force, you will be sacked, and your path will be on the road to ruin.

While the general population may be outraged, this is normal behaviour in a police state.

See article by HeraldSun of the headline:

August 1, 2018. Whistleblower Rick Flori has accused Queensland police of withholding documents in his bid for damages over alleged bullying. Mr Flori, who left the force before being acquitted of misconduct for leaking footage of Gold Coast police bashing a handcuffed man, spoke to reporters after appearing in Brisbane Supreme Court in his civil matter against the state and eight police officers. "I'm very disappointed in the behaviours of police particularly towards their own," My Flori says. (AAP VIDEO/Warren Barnsley)

Please ask Rick to view the articles on our website. We are documenting the corruption and...yes, I dare say it...TREASON by these vile criminal political party politicians.
http://www.cirnow.com.au/

The police have been hoodwinked by the politicians, so we shouldn't place too much blame on them...except for those at the top who know they work for a political party-led Corporation.

Learn the truth at our website. More information will be released to the public in the near future that will blow the lid off the political party scam.