Centrelink is an agency that distributes funds from the government to people who are on the Social Welfare system.

On Monday the 9th of March 2009, Victorian workers experienced a planned day off from employment called Labour Day. A standard procedure with Public Holidays is that if any (Centrelink) forms are to be lodged on that day, a letter is usually sent instructing to lodge the form in a working day prior, so that it gets processed and the monies are in the account one day after the Public Holiday.

In this instance, Centrelink has defrauded millions of customers from interest earned from the monies that were supposed to be given on the correct date.

A person who rounded down $0.01 from the NAB's customer accounts, once found out, has been jailed for 8 years.

He has stolen monies from your account and has been jailed.

Centrelink has stolen monies from your account, and NO ONE is accountable, and NO ONE will be prosecuted.

The same crimes committed by governments / corporations against individuals NEVER see court / jail time or EVEN the idea of paying it back is NEVER entertained.

The financial devastation took a heavy toll on the world's billionaire's club, with the top 10 richest people losing a total of $US238 billion ($A368.48 billion) - more than the gross domestic product of Ireland or Israel.

Billionaires whose fortune increased were few and far between. One was New York Mayor Michael Bloomberg who bought back a $US4.5 billion ($A6.97 billion) chunk of his financial services market from cash-strapped Merrill Lynch, while another was financial guru John Paulson, who made billions of dollars betting against the housing market.

The decline in fortunes hit especially hard in Russia and Asia, allowing Americans once again to dominate the rich list with 10 of the top 20 spots. New York replaced Moscow as the top billionaire city with 55 members of the rich list, followed by London with 28 billionaires and Moscow with 27.

Another LIE deliberately perpetuated by the MASS MEDIA.

Under NO circumstances do these outlets talk about Freemasonry in Politics, Law or Banking and Finance or any other KEY positions.

See video: Rothschild : They are the World's richest family yet they NEVER make it into the mainstream media.

Rockeffelers, Rothschilds not on Rich lists

Businessweek 1998 - The Richest family in history?


dailymail.co.uk : The Richest Rothschild of them all

Posted by AuCorp at 9:42 AM No comments:

The investigation into crime statistics and police numbers tabled in state parliament on Wednesday found that some police misused recording procedures "to make it appear that more crime has been successfully solved than is actually the case".

Crime in Victoria is captured on the Law Enforcement Assistance Program (LEAP) database.

Some offenders arrested and processed had unrelated, unsolved offences for which no one has been arrested added to their file, to "clear up" crime rates, the report said.

The matter has been referred to the Office of Police Integrity for further investigation.

The Police Association said it was not in the interests of its members to cook the books to make the crime statistics look better.

The association's secretary Greg Davis said some fault lies with the system, which he described as "cumbersome".

"The statistics are going to be as accurate as the system allows them to be," Mr Davis said.

"But I don't think even the Ombudsman has been able to find evidence of people deliberately cooking the books.

"It's not in the interests of any operational police officer to do that."

Posted by AuCorp at 6:35 PM No comments:

Posted by AuCorp at 3:00 PM No comments:

Kiwis might be switching on to watch Underbelly, but the crime series does not impress the New Zealand journalist who cracked the heroin ring at the centre of the tale.

Pat Booth, a former investigative reporter who worked on exposing the drug ring lead by so-called Mr Asia, New Zealander Terry Clark, says he was "sickened" by the glamourisation of criminals in the promotional material for the show.

The journalist, who had a $NZ30,000 ($A23,455) contract on his head while investigating the drug ring for an Auckland newspaper, said a reference to "Kiwi ingenuity" was particularly appalling.

"Ingenious? Homicidal, sadistic, totally without conscience, a vicious criminal who murdered or had killed at least six associates - one survivor estimates 12 dead," Booth wrote in an editorial in The Dominion Post on Tuesday.

The second Underbelly series follows the booming marijuana and heroin trades and the drug kings and criminals involved in Sydney, Melbourne and Griffith from 1976 to 1987.

The first series about the Melbourne underworld flopped in New Zealand, and was moved to a low-interest time slot after the fourth episode. However, television station TV3 hopes the Kiwi connection through Clark will boost its appeal this time around.

Booth said the series was "riddled with fiction and omissions", and warned it was important to remember Clark's syndicate had "destroyed the lives of hundreds of New Zealanders".

"Dead sons, missing without a trace or physically and mentally crippled by the addictions he made a fortune from, some still living under the false names given to protect them because they talked nearly 30 years ago," he wrote in the newspaper.

"And daughters seduced into carrying drugs, exploited sexually and beaten when they failed." 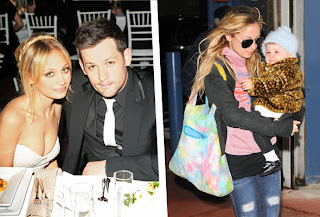 It’s a day Nicole Richie has dreamed of for years – and finally it’s becoming a reality. Just minutes after a doctor confirmed she was pregnant with her second child, Nicole’s boyfriend Joel Madden turned to her and said: “Let’s get married – I’m ready.”

Just another article to break up the monotony...

Another stupid, delusional individual, trying to make up with a 'rich' wedding for the inadequacies in her miserable existence.

Another statistic doomed for failure.

Telstra chairman: we deserve our pay

Telstra's multi-millionaire chairman has hit back at the "hysterical" public outrage over executive pay, defending corporate Australia against the growing "bosses are bastards" mentality.

Donald McGauchie - who approved a multi-million dollar golden handshake for Telstra's soon-to-depart chief executive Sol Trujillo - said the outcry of "us versus them" in response to job cuts is helping no one, as companies do all that they can to protect their employees and shareholders.

Including his fees for board roles at James Hardie Industries and Nufarm, he earned a total of nearly $900,000 last year as a non-executive director.

His comments came as public pressure mounts on the board of Pacific Brands, which announced plans to cut 1,850 jobs and move its clothing manufacturing operations to China.

Earlier today, rumours of sweeping job cuts at National Australia Bank were met with a sharp warning from the financial sector union that it would attack the executives' pay packages should the cuts go ahead.

Speaking at a business lunch in Melbourne, McGauchie defended corporate Australia as it battles to survive the global economic crisis.

"Populist calls for companies to take a hit on profits to save jobs - while sounding to the tabloid press as being loaded with compassion - is in fact the opposite," McGauchie said.

"If it were that simple not a single worker would be out of a job. Employers don't want to sack employees, especially in these difficult times."

Telstra itself has cut over 10,000 jobs since it began an internal streamlining program under Trujillo in 2005.

An increasingly prevalent "us versus them" mentality, manifesting itself in a call of "bosses are bastards", is dangerous in the current climate, McGauchie said.

"What we need now is calm and steady leadership at every level of society," he added.

"We just can't afford shooting from the hip hysterical responses. When decisions are made, people should move on and get on with it."

Every business leader is focused on making the right decisions, McGauchie said, but in the current economic environment there are lot of external forces which cannot be controlled.

"Commentators, outside the boardrooms confronting these very real and critical issues, are often unaware of the complexity of the issues that are being managed," McGauchie said.

As we digest yet more gloomy news about our (actually quite strong) economy, over in the US things are going from the sublime to the ridiculous in the case of what is the biggest con-job ever to darken the world’s doors.

First the background. You may have heard of Bernard Madoff – he’s the bloke that announced in December that his investment firm, which was the 6th biggest on Wall Street, was one giant scam that fleeced Americans to the tune of around $80 billion. No, that’s not a typo, it was $80 billion.

The latest on the case is that - file this in the 'only in America file' - Bernie may be on the verge of brokering a deal that would allow him to keep more than $100 million in cash and assets. It's also possible that he may manage to avoid doing any jail time whatsoever. P>Bernie is currently in court in the US and it’s fair to say that if he’s found guilty, which is highly likely, he’ll be looking at a life sentence in the big house.

However, speculation is building that he could strike a plea bargain saving himself from a lengthy trial and possibly scoring a sentence reduction and allowing him to keep his fortune.

Some legal experts now believe Bernie could avoid doing any jail time at all. If he can delay sentencing long enough to allow public outrage to subside, he could argue that as a frail and elderly man a jail sentence is not appropriate.

Rorted investors are understandably livid at the prospect of Bernie walking the streets again at any time in the future and have warned that “he’ll be safer in jail”.

In this case, it’s not just the little people that have been scammed. Celebrities including Kevin Bacon and chat show legend Larry King as well as some of the world’s biggest banks have been slugged by the scam.

And in a deliciously ironic coincidence, one of Madoff’s victims, who was taken for nearly $400,000, is a professor of psychology who released a book on gullibility just days before Madoff confessed.

No details are available of how the professor’s book sales are holding up.

The focus is also now firmly on Madoff’s other half, Ruth. Ruth, who has not been charged, has amassed a rather substantial nest egg of $100 million as well as a penthouse apartment in New York City worth more than $10 million. Understandably, victims’ lawyers are demanding that the money be used to pay back investors.

Unsurprisingly, Mrs Madoff claims that the money has nothing to do with her husband’s scheme and is refusing to give it back. It turns out that assets and cash have been being mysteriously transferred to Mrs M since 2006 since 2006, when US authorities began probing Madoff’s activities. But under the bargain apparently being discussed, if Bernie pleads guilty, prosecutors ma be convinced to stop persuing Mrs M.

This is undoubtedly just the latest chapter in a saga that has plenty of legs and there will be further lurid revelations to come.

So, as we consume headline after headline predicting economic doom and gloom, we can rely on America to deliver a massive scandal to take our minds off that pesky recession.