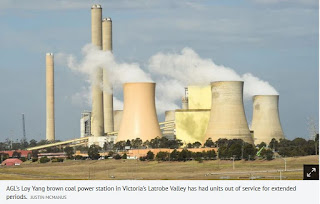 With the heatwave in Melbourne on Friday the 20th of December 2019, where 44 °C (111 °F) was recorded in the 'burbs, the authorities stated that blackouts would be a common occurrence, where the blame is put on the weather or maybe an act of god.

The reality is that the weather is no longer an ‘act’ of god but rather an ‘Act’ of parliament.

The mainstream media reported that two electricity generators were not functional, in order to activate when peak power is required by ‘consumers’.

So, we have an approx influx of 2,500 people or rather ‘consumers’ from overseas per week coming into Melbourne.

These consumers need to be housed in the process consuming infrastructure resources that the government has deliberately not expanded on, in this case electricity.

You can bet your tax payer funded politician’s pay rise that the humans in government have not missed out on providing themselves with sufficient resources (e.g. tax payer funded holiday 'allowance') to carry on with their business activities.

Australia, the most corrupt colony on the planet?

Remembering, that in order to put the bushfires out, all the (Victorian) government as to do is to ‘make it rain’ as per the above mentioned Act, but that’s another post altogether.
Posted by AuCorp at 1:16 AM No comments: