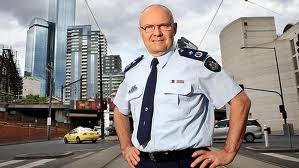 The new head of police state Victoria, Ken Lay promises to tackle crime, motorists being high on the agenda, according to a news report from the 15th of November.

As reported by the Herald Sun, the official priority hit list is in the following order:

His election as Top Cop comes in the wake of his two predecessors leaving under disgraced circumstances.

Victoria’s previous Top Cop, Simon Overland was linked with providing fraudulent information, and allegations of involvement with the drug syndicates. As yet no formal charges have been laid against Overland.

Overland was given the position, after his predecessor, Christine Nixon, was given the tile of Top (female) Dog, without the qualifications or experience necessary, giving the phrase ‘Money for Mates’ credibility.

She left under disgraceful circumstances, when the state of Victoria was under emergency, during the bushfires, she nonchalantly disregarded her role, attending a formal function, whilst the emergency services, including the police were working overtime.

The Herald Sun has published his weak educational achievements, which consist of a Diploma in Police Studies, together with a Bachelor of Arts.

Organised crime, which includes the drug gangs is a large contributor to other crimes committed. The industry is worth an approximate $1.2 billion per month, yet the news media rarely reports on $200 million dollar drug hauls, which should happen on a weekly basis, and not on monthly or two monthly cycles.

Many police, politicians, law makers, high profile business leaders are involved in the slae or use of illicit drugs, yet the government deliberately turns a blind eye.

The leaders have again demonstrated that a ‘Money for Mates’ system is alive and strong within the police state of Victoria.