Police will not sack their 'brother' despite criminal activity

The police commit many criminal and unethical actions, where even if caught out go unpunished and still remain in their jobs, something that would be against "community standards".

The intention of Victoria Police was to never show the public the corrupt nature of the state's judicature therefore their extreme attempt to keep the Nicola Gobbo matter under wraps.

Last year the 'Corporate Australia' site published the name of Lawyer X / Informer 3838, where post was taken down by Google, but not before it was read by many.

The Gobbo matter highlights that a person actually involved in criminal activity or accused in any criminal activity (including  alleged driving offences) cannot trust the judicature (that being persons involved in the 'administration of justice', from the 'gatekeepers' i.e. registrars court clerks to 'officers of the court' i.e. lawyers, sheriffs, or police or magistrates or judges).

As a result of the royal commission the current chief commissioner Graham Ashton should be removed from office but as usual the 'brotherhood' will support him in keeping his salary, ripping off tax payers.

Why not keep smiling, especially when one can act with impunity. 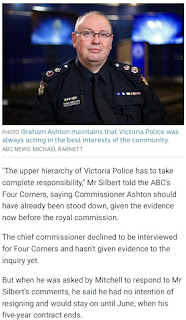 Just another day in a police state.