Can you really trust the corporate media? 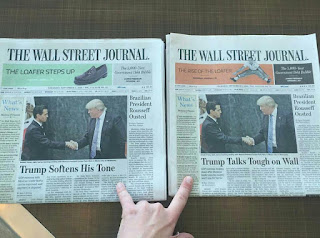 Posted by AuCorp at 5:19 PM No comments: 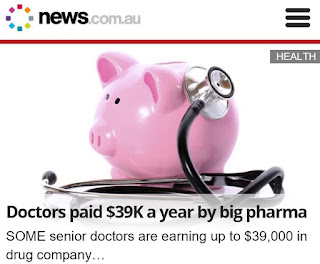 You can 'legally' (that is something produced by companies - for huge profits, then 'taxed' and given to the public) prescribe drugs, even ones that are detrimental to the 'customer', tell them they need it/them and reap the rewards (like obtaining profit - a bit like an 'illegal' drug dealer) from the company that 'sponsored' you to give their drugs to people.

Conversely if you sell an illegal (something produced naturally, and sold to another man/woman for little profit) drug that may help others, e.g cannabis oil, you risk incarceration.

Ask your quack how much they're getting for prescribing your medications?


That is the current state of law on this penal colony called Australia.

As an example, you're on social security benefits (through a company called Centrelink in Australia) where you receive your inalienable payments.

Your circumstances change where you must receive a lesser payment, after a while due to the circumstances of life you genuinely forget to notify that company.

The company gets to you beforehand and demands to pay back the monies, and when you do not have them, you most likely end up in court and a (unlawful) judgement (MUST be done before a jury, and not in the star-chamber courts, i.e. Magistrates', County or Supreme Courts, buy a single 'judge') will be made to incarcerate you.

If the business (knowingly) overpays you and you do not give the monies back, you again most likely go to prison.

Conversely if you deliberately engage in a business where you steal or defraud the people and you get IF you get caught, you could end up in court, you most likely will not go to jail (especially if you are a member of the boys club, a 'brotherhood') and most definitely will NOT have to pay back the monies you stole.

If you are a politician, like Julia Gillard or Craig Thomson and get implicated in criminal activity, you do NOT go to jail (gaol).

Just a penal colony where (smart/supported - part of the 'brotherhood') high end criminals rule the masses, starting off with the birth mother - the 'Crown' and it's descendant - the 'Australian Government'.

We help pay for terrorism at the petrol pump

Petrol is cheap at the moment in Australia but there's a lot of complaint that it should be cheaper yet.
In truth, we have never experienced cheap petrol. There has never been cheap oil.

Saudi Arabia uses the proceeds of its oil exports to pay for, among other things, the missionary spread of the Islamic fundamentalist doctrine of Wahhabism.

This has spread like a cancer to scores of countries. It has poisoned traditional local interpretations of Islam and created the toxic climate for extremism and terrorism to grow. 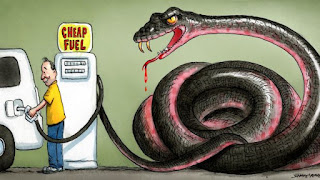 The official religion of Saudi Arabia is a "brand of ultraconservative Islam [that] is nearly identical to that of the Islamic State," says William McCants, author of The ISIS Apocalypse.

The two are so similar, in fact, that when the so-called Islamic State or Daesh was looking for textbooks to hand out to schoolchildren in its de facto capital city of Raqqa, it printed copies of official Saudi textbooks it found online.

The barbaric punishments that Daesh hands out? It's no coincidence that they're identical to the religious penalties or hudud that the Saudi government inflicts on its people – death for homosexual acts, death by stoning for adultery or attempting to leave Islam, amputation of a hand for stealing, and so on.

A former imam of Saudi Arabia's Grand Mosque in Mecca, Sheikh Adil al-Kalbani, said in January the leaders of Daesh "draw their ideas from what is written in our own books, our own principles", according to The New York Times.

The Saudi government and Saudi religious charities and Saudi philanthropists have spent a fortune quietly funding Wahhabist mosques, preachers and schools across the world in countries now struggling to contain the threat of Daesh terrorism, countries from Belgium to Indonesia.

How much have they spent on this global missionary effort? A well-regarded professor of strategic studies at the Centre for Policy Research in New Delhi, Brahma Chellaney, says: "Since the oil-price boom of the 1970s, Saudi Arabia has spent more than $US200 billion on its global jihad project, including funding Wahhabi madrassas, mosques, clerics and books."

All of that has been funded, ultimately, by the export of Saudi oil. By buying Saudi oil, we in the West have funded the fomenting of the fundamentalist movement that now assaults our security and our civilisation.

"Western powers actually encouraged the kingdom – as an antidote to communism and the 1979 anti-US Iranian revolution – to export Wahhabism," Chellaney says.

And even when there was not active encouragement from the West, there has been the unending flow of great treasure to the kingdom. The average cost of producing a barrel of oil in Saudi Arabia is about $US9, the lowest in the world.

So whenever the world oil price is above $US9 a barrel, the Saudis are making a profit. It has never been anywhere near as low as $US9 in the entire post-oil shock era that began in the 1970s. The lowest recent price was when it briefly hit $US15 in 2001.

The world price is currently in the high $US40s. In other words, the West and others have kept the Saudis richly funded and well bankrolled. And that has meant that Wahhabism has been well bankrolled, too.

The West's complicity in supporting its own most virulent enemies may not be household knowledge, but it's certainly no secret.

US Vice-President Joe Biden made the point in a speech two years ago that the Saudis and other "allies' policies wound up helping to arm and build allies of al-Qaeda and eventually the terrorist Islamic State".

Washington has supported the House of Saud, with a military base in the country, since 1945 under Roosevelt.

As the American resource academic Michael Klare explains in his book Resource Wars: "At the core of this arrangement is a vital but unspoken quid pro quo: in return for protecting the royal family against its enemies, American companies will be allowed unrivalled access to Saudi oilfields."
And the Saudi royal family has a power-sharing arrangement with the country's Wahhabist clerics.

The government supports Wahhabism as the state religion, and the clerics in turn endorse the legitimacy of the Sauds as an absolute monarchy.

Counting only the countries where Islam is a minority religion, Saudi Arabia has paid for the construction of 1359 mosques, 210 Islamic centres, 202 colleges and 2000 schools, The New York Times reported on the weekend.

Recent terrorism in Belgium and France has drawn attention to the Brussels neighbourhood that has now become notorious as the epicentre of Daesh terrorism in western Europe, Molenbeek.

This is no accident; the Saudi government opened an enormous mosque in Molenbeek in 1978 and has steadily spread Wahhabist intolerance ever since.

The extremist challenge in some Muslim-majority countries is even more severe. It's changing the character of countries.

Barack Obama explained to Malcolm Turnbull during an APEC summit how Saudi-funded Wahhabism was changing Indonesia, The Atlantic Monthly has reported.

Obama, who spent some of his childhood in Indonesia, told Turnbull that he'd watched the country change from a relaxed, syncretistic Islam to a more fundamentalist, unforgiving interpretation; large numbers of Indonesian women, he observed, have now adopted the hijab, The Atlantic Monthly reported.

When the Australian leader asked why this was happening, Obama told him that "the Saudis and other Gulf Arabs have funnelled money, and large numbers of imams and teachers, into the country", according to the magazine.

"Aren't the Saudis your friends?" Turnbull asked, according to the magazine's rendition. "Obama smiled. 'It's complicated'," he reportedly answered. Not really. The US has supported the Saudis externally in order to extract the oil; the Saudis have supported their own legitimacy internally by using some of the proceeds to finance missionary extremism.

"We feel that we are under attack from the growing influence of Wahhabists in Indonesia" preaching an alien literalist Islam, Monash University law professor and Indonesian national Nadirsyah Hosen tells me.

Considering the cost of Saudi-sponsored extremism to our security, to our social cohesion, to civilised values everywhere, even the cheapest oil price means that we pay for our petrol at an incalculably high price.