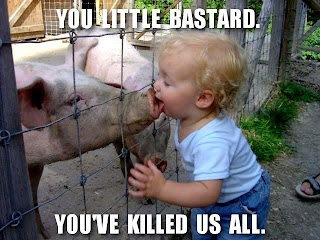 It is through relentless research from this blog, that one could be confident of coming closer to the source of the pandemic.
Now all that remains is to find the indivdual.
Since Team America World Police is in the process of scanning / catalogging all individuals, this process will now become seamless.
Posted by AuCorp at 10:50 PM No comments:

The government like any other business is in it to make money for itself, and distribute it within its clan.

In order to pay for this extravagance, NEW methods of TAXING the public must be thought up of.

One solution, is as a result of the 'drought' and NOT the GFC (Global Financial Crisis), is to TAX people for FLUSHING their toilets.

An ingenious method, which may pave way on to a 'breathing' tax to emit less 'greenhouse gases'.

Since the privitisation of the water utility, in the last generation (25 years) there has been NO increase in water supply (water storage dams nor desalination plant construction) BUT an increase of 30% in population, has contributed to the lack of water NOT the alleged 'drought'.


In every decade Australia has been in some sort of 'drought'.

It is through the lack of action by every government of the day (in order NOT to spend money) that is the result of the lack of water, we have today.

Call it the letter of the law.

After an almost eight-year legal battle, a Malaysian court has ruled that a local curry house did not infringe on the McDonald's trademark by using the prefix "Mc".

The US fast-food giant argued that McCurry — a local eatery whose menu features delights such as murukku and fish head curry — had illegally made use of its trademark.

"No way we infringed McDonald's trademark," said jubilant McCurry owner Kanages Suppiah after the ruling. "We have nothing synonymous with them."

McCurry's lawyer Sri Dev Nair said there was no question of customers confusing the two companies.

"The type of food we serve and the age group of customers that come to McCurry are different," he said.

A VERY polite way of saying, since our customers are NOT Muppets, therefore we do NOT serve Muppet food.

McDonald's food may cause you to be fat and obese and breed retarded offspring. 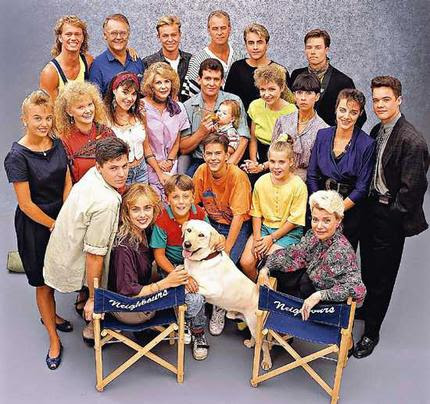 The Australian Television series 'Neighbours' has been a hit of the small screen for quite some time.

It has been the stepping stone for names like Kylie Minogue, Jason Donovan, Holly Valance just to name a few.

The show features a generally exclusive 'Aussie' cast, where in reality this is far from the truth. Australia has been a multicultural country, from the 1960's, and at one time in Australian Politics, there was a "White Australia" Policy.

This is the current politics of the show's Anglo producers.

It is also in the politics of the producers to keep it 'all in the family'.

'Talent' like Daniel McPherson, would NOT be on the show if it were not for his famous sister.

Jason Donovan's father was also in the show, and his mother a Sue McIntosh a media personality.

To the lay person it all seems legitimate, BUT the Entertainment Industry is a CLOSED industry.

It is the politicans / media that teach us to be racially tolerant, whilst themselves being RACIST.

Posted by AuCorp at 9:38 PM No comments:

An autistic US teenager stole his dad's car and managed to buy a plane ticket without ID before taking a cross-country flight to be closer to his mother.

Kenton Weaver, 13, snuck out of his father's Florida home before dawn with his car keys, drove to the local airport and got past airport security without a passport, drivers licence or any other kind of official ID before boarding the flight to California.

He eventually landed at Fort Lauderdale/Hollywood airport after sunset on the other side of the country.

"I can't believe he pulled this off — I'm flabbergasted," his mother Kim Casey was quoted by the Palm Beach Post as saying.

Kenton's father Dean suspects his son used a stolen credit card number to purchase the ticket but doesn't understand how the boy could buy the ticket without the actual card or photo ID.

He also says he has no immediate plans to fly his son back.

"I think I'd like for him to stay there for a while, I'm obviously not set up here to keep him, though I've tried," Mr Weaver said.

"I have another son, 8 years old (and) my fear is next time he gets in the car, he might take his little brother."

Kenton is diagnosed with Asberger's Syndrome, a high-functioning form of autism, and is fixated on two things: food and planes.

Police had twice found the boy at the local bus station trying to get rides to the airport in the week before he made his break and had given Kenton "a stern talking-to" a few days before.

"He'll do anything to go to an airport," Mr Weaver said.

"He wants to be a pilot, he applies for jobs at the airport, he collects (toy) planes … he's just fascinated."

Ha Ha so much for Airport Security, and the cataloging of everyone because we are ALL TERRORISTS.

The joke is on the US Government.

Fast food chains may be flourishing in tough economic times but news of a British mother happily treating her triplets to McDonald’s meals will shock even the most avid burger guzzler.
The UK’s Daily Mail talked to Leanne Salt, a 24-year-old mother of eight month old triplets, who admitted that she frequently serves her youngsters fast food.

‘They were six months old when they had their first McDonald’s,’ she told the paper.

At over 190 kilos, the young mother is severely overweight and gave birth to her babies five weeks prematurely.

The average daily intake for the babies is approximately 1,200 calories which is twice the amount recommended by nutritionists. Meals generally pan out as follows:

If you are reading in disgust, Miss Salt defended herself by revealing, " I feed my babies vegetables every Sunday." Clearly the five-a-day recommendation has passed her by...

Miss Salt is not alone in her dangerous approach to family meals. Research carried bout by the UK’s Infant and Toddler Forum concluded that almost 30 percent of children under three years were eating fast food on a weekly basis.

Nutritionists warn that not only does a bad diet during infancy increase the likelihood of childhood obesity, but the high levels of salts and saturated fats can result in diabetes and heart problems too.

Miss Salt’s triplets are currently within a healthy weight range for their age, but for how long?

Just because you can breed does not mean you should, but then again who's going to replace your trailer park trash life when you go??? !!! ???

Comments by one reader:

This women clearly has no brains, i just read that article in absolute disgust. What she is doing to her babies is child abuse imo.. Those triplets should be taken off her and she should be made to do an educational course on diet and nutrition aswell as excerise. Going by her weight at a heafty 190kg, shes a fat mother breeding more fat kids... Sad but true..
Posted by AuCorp at 11:45 PM No comments:

Suggestions that a man turned to the drugs business after being shattered by his break-up with entertainer Holly Valance have been rejected by a judge.

Peter Ververis, 28, was jailed for two-and-a-half years on Tuesday after police found him with 417 grams of methamphetamine when they raided the home he shared with his brother in the Melbourne bayside suburb of Cheltenham in September 2006.

Ververis, who had recently broken up with Valance, was smoking an ice pipe in the kitchen when police raided the home.

At a pre-sentence hearing earlier this month Ververis' lawyer said his client began using large amounts of ice following the break-up of a relationship that he described as "full-on" and "life-long".

But on Tuesday Victorian County Court Judge Geoffrey Chettle dismissed suggestions Ververis had turned to the drugs business after the break-up of his relationship with the former Neighbours star.

"In my view there is simply no explanation for your involvement in the drug business."

Ververis pleaded guilty to trafficking a drug of dependence.

His brother Chris Ververis pleaded guilty to possessing and producing a drug of dependence.

Police also raided a methamphetamine lab in Cheltenham which was operated by Chris Ververis, there they found instructions on how to make drugs.

Judge Chettle described it as "certainly not the most professional operation".

Judge Chettle ordered Peter Ververis, who had no prior convictions, to serve a non-parole period of 18 months.

He sentenced his brother to three years and six months prison.

Chris Ververis must serve two years and three months before being eligible for parole.

You don't make it in Hollywood / Music Industry WITHOUT selling your body.

Items like Valance are a NO talent, just tender meat for Media Moguls to taste.

Madonna chronicles this VERY well in her songs.

Posted by AuCorp at 7:59 PM No comments:

In 2001 it was alleged that Richard Pratt the owner of the $5 Billion Cardboard Recycling empire, Visy was involved in a price fixing scam to the tune of $700 Million

Later it was proven, AND Pratt admitted price fixing with rival Amcor chief Russell Jones. As a result he was fined $36 Million or approximately 5% ( better than the taxable income rate of 50%) of the total fraud.

Since then Pratt became gravely ill, and as a result has a very short time left. In the final days/ weeks/ months of Pratt's life quoted by his Lawyer :

He has committed FRAUD and NO circumstances should change that.

This sends out a CLEAR message, that people or friends in the Legal System , can be bought for an undisclosed amount, and if you are part of the upper financial circle you are UNTOUCHABLE.

Scientology NOT a religion

As a general rule of this blog, religion is NOT discussed, or cult followings for that matter, but it is quite interesting to note that on National Australian Radio on Monday, there were comments made in regards to Scientology.

On one of the commercial networks, at peak hour (i.e drive time home) there was a segment with regards to the experiences of a comic duo, who ventured to a show in Los Angeles, with a guest 'star' present on the show, that being Nancy Cartwright (the voice of Bart Simpson, of 'The Simpsons' cartoon fame).

The claim was made that she was offended with one of the 'comedy' sketches with her claiming it was with reference to her 'religion' Scientology.

Scientology was thought up of by Lafayette Ron Hubbard with a friend, at a train subway as a form of tax evasion. Hubbard was a science fiction writer. Scientology is a cult following, and NOT a religion.

It is a much as a religion, as would be Jedi Knighthood (Star Wars), from the fictional writings of George Lucas.