It's NOT enough that Centrelink has fraudulently sent out debt collection letters to welfare recipients,

now the people must put up this sort of abuse: 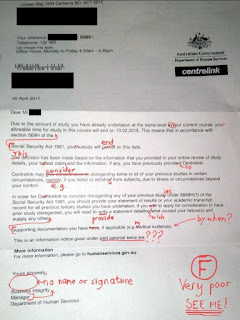 The good people of Australia MUST know that the government has been collecting and storing their data for quite some time, where only now (Good Friday, 2017) the law has caught up and been officially implemented.

Police commit many criminal actions against the general populous daily, and with regards to privacy breaches the numbers are staggering where they are hidden from the masses and for very good reasons.

ONLY one case has made it out into the public eye regarding a journalist having privacy breached with regards to the new metadata laws.

Since this journalist is a VICTIM of criminal actions by police, the new metadata laws must contain a remedy for the victim within the act, as they do for government bodies..

UNLESS of course the people in government who have written the laws regard the good people of Australia as slaves or enemies of the state.

Let's see what 'remedy' the journalist obtains being the victim of police criminal actions.

The breach took place as part of an investigation into a leak of confidential police material - and the incident will now be investigated by the Commonwealth Ombudsman.

AFP commissioner Andrew Colvin said the police officers investigating the leak did not realise they were required to obtain a warrant to access the journalist's metadata.

"This was human error. It should not have occurred. The AFP takes it very seriously and we take full responsibility for breaching the Act," Mr Colvin said. 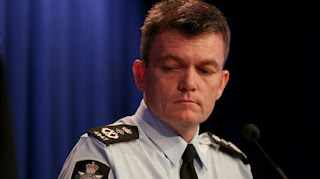 "There was no ill will or malice or bad intent by the officers involved who breached the Act. But simply it was a mistake."

The journalist in question had not been informed their data had been accessed, Mr Colvin said, due to sensitivities around the ongoing investigation into the leak.

The breach occurred "earlier this year" and was reported to the Ombudsman on Wednesday.

Under the revised data retention regime, police are required to obtain a warrant from a judge to seek metadata from a journalist.

The phone records in question were relevant to the investigation, Mr Colvin said, but "what was improper was that the right steps weren't taken to gain access to it".

The breach is the first such incident that has come to light under the government's new metadata retention regime, which requires service providers to store their customers' data for two years.

Acknowledging the policy was "controversial", Mr Colvin said Australians should nonetheless have "full confidence" in both the police and the policy.

He conceded the AFP's internal procedures had not anticipated and prevented the error and therefore those practices would be subject to "significant changes".

Asked if the unlawfully-obtained phone records would still be relied on to inform the actions of investigators, he acknowledged that once seen it could not be unseen.

"Clearly they can't unsee it. They'll need to consider ... what weight they put on what they saw," Mr Colvin said. "But that material was accessed illegally, so it can have no bearing on the conduct of the investigation."

He stressed the content of the journalist's phone calls were not accessed, just the call records. But Paul Murphy, chief executive of the Media, Entertainment and Arts Alliance, said that was not a mitigating factor.

"It's another demonstration that the AFP do not understand the sensitivities here, the vital importance of protecting journalists' confidential sources," he said. "It's an absolute disgrace."

South Australian senator Nick Xenophon, who lobbied for extra safeguards for journalists when the laws were formulated, said he was "furious" about the revelation and would seek further amendments to the law.

"This is outrageous. There's been a flagrant breach of the law here," he said. "The safeguards have been completely trashed. This should chill the spine of every journalist in this country."
Posted by AuCorp at 11:30 PM No comments: