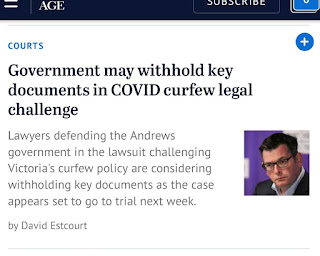 “Nothing to hide, nothing to fear”, right?

Well that applies to the plebs and not those in government, silly.

They have everything to hide, because their actions are not lawful.

How does that other saying go again?

“It’s legal, until you get caught”

That’s pretty much how all those in positions of power operate.

How can you trust any person in government if their objective is to deceive you and deliberately keeping information from you.

You won’t be off to a good start if you’re accused in an alleged criminal action (e.g. travelling faster than an allegedly allowed velocity), and you're up against people who do not provide you with ALL the necessary documentation.

Even worse when they got the magistrate/judge in their pocket.

If any of those people in government have the intention of committing a criminal activity, then they do not deserve their tax payer funded position, as this would be also the case in the ‘real world’, i.e. a job loss in a company/for a private employer. 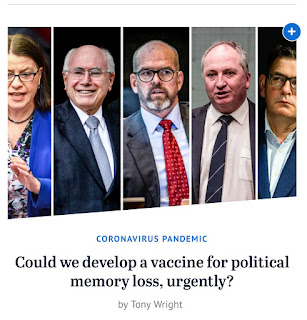 If Daniel Michael Andrews and his cronies worked in the ‘real world’ they would have been removed from their positions and not being able to get another job, which happens to many serfs when they stuff up.

At the end of the day how do you know these people are lying?

Their lips are moving! 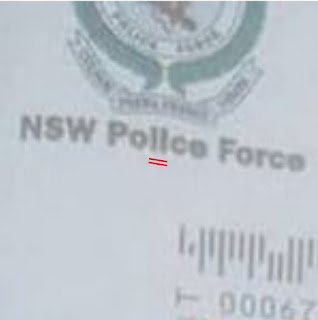 Do not pay a fine, especially one issued by a dodgy corporation with a name such as  ‘NSW Pollce Force’.

Why should you not pay a fine?

Well, quite simply put a fine is an ‘allegation’ of wrongdoing, which in Australian states and territories is a matter of a question of law.

The authorities will try to extort cash out of you in various ways, and its up to you to expose their lies and deception. 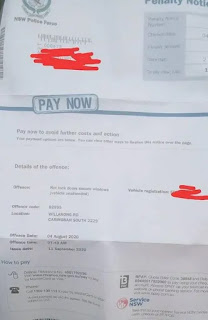 Posted by AuCorp at 8:17 AM No comments:

The authorities claim that there’s always some sort of war, you know a war on terror, waste, drugs or whatever other topic is befitting for that month.

The ‘war’ that the people are facing is one on their (internet) privacy, where the front is your smart phone.

False companies are setup under the ‘advertising’ banner that obtain your metadata and pass it on to government players, yes including the ‘bad’/rogue governments.

In a previous article we explained how Firefox leaks your internet address, where some people have suggested to use Brave which is based on Google’s Chrome product.

Anything Google based means that there is zero respect for your privacy, meaning that you’re going to get data mined, where the data is going to be on some government server.

A more tech savvy person may say the since Brave is Chrome based you can change the WebRTC settings under link chrome://flags, where you can disable up to 5 setting with reference to WebRTC. 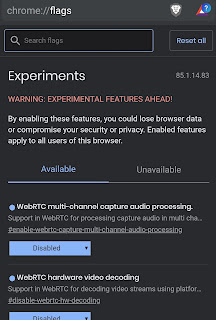 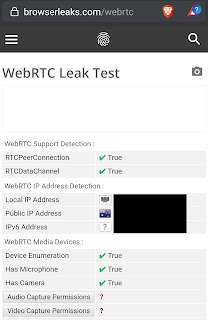 As a result we do not recommend using Brave if you value your privacy.

Mozilla have also screwed you over with regards to your privacy where they have removed the “about:config” function which allowed you disable WebRTC leaks in its updated version of Firefox for Android.

If you must use apps you should be looking for the ones that are not GSF (Google Services Framework) dependent.

Stay away from them like the plague or you know, COVID.

See article on Firefox at:

In today’s modern world the masses are taught that upgrades are supposed to be good, but good for who?

If you bought something from a manufacturer it might be good for you, and also for the manufacturer as they made a profit from you, but if you only bought it just once, then it maybe not so good for the company, so they could hinder the design of a product with the plan for ‘upgrades’ already on the drawing board in order to maximise/extort profits from their customers.

In the automotive industry the upgrade path is a bit more obvious in an example from Model T Ford to a newer vehicle will not only give better ‘creature’ (because that’s what some of your are, just ‘creatures’) comforts like air-conditioning, automatic windows but also safety features like (real) brakes and safety lights.

Since the advent of mobile internet connected devices the so called upgrades are a bit more dubious.

Apple in its first rendition of the iPhone did not have copy and paste enabled in the software, where other companies did so in their archaic PDAs (Personal Digital Assistants), where also hardware inside the iPhone was limited by software switches enabled in the next ‘update’. NOT a very honest company, right?

Today’s I.T. corporations are all about metadata and so called ‘advertising’ (read: government corporation data collection) for a ‘better user experience’ (whatever that means) but in reality that data is harvested to be used against you in the future.

Smart phone apps (or programs) are the worst privacy offenders and that’s why corporations are pushing you the consumer data generator to use them, despite the illusion that you have disabled an access setting via a software toggle switch.

Web browsers on a smart phone provide less access to information than apps can obtain, but those days are coming to an end soon.

An essential element to your internet privacy is something called your IP (Internet Protocol) address, e.g. 216.58.200.101 (in this case Google’s email server).

Device fingerprinting and browser fingerprinting are the two major ways corporations are now using to identify you personally on the internet, irrespective of how they deny this publicly.

In previous versions of Firefox (for Android) you could lessen your footprint or somewhat hide your IP address from sites in a setting where it’s tested under a WebRTC Leak Test, as seen in the screen capture below. 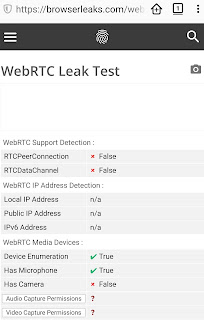 If you ‘upgrade’ to a new version of Mozilla’s Firefox for Android smart phones , your ability to go into that setting is removed by the corporation, therefore making you more vulnerable to online fraud or even doxing.

This also exposes your IPv6 address which also uniquely identifies you and is more dangerous to your online privacy, as seen in the edited screen capture below: 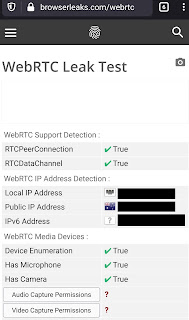 To protect your IP address from leaking within Firefox, in the address bar type about:config and toggle media.peerconnection.enabled to false.

To test if your pissing your IP address all over the internet go to:

We do not recommend updating or even using a version of Firefox, if you cannot disable WebRTC leaks.

So, you think DuckDuckGo (the Android web browsing app) is any better?

It's quackin' your IP address all over the joint: 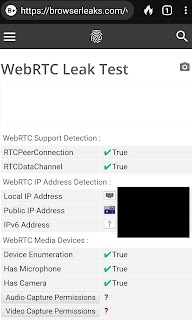 Posted by AuCorp at 8:26 AM No comments: