Why you are an idiot

So you go to court and you are about to get a jolly rogering!

If you get someone to 're' present you, you are considered a ward of the state, a mute, unable to speak.

If you go on your own to present yourself before the 'judge'....

So, let's have a look at the etymology of  the word 'idiot'.

Armed with a legal dictionary or three, e.g. Ballentines / Black's / Bouvier's Law dictionaries may only give you one side of the story.

Therefore it is a good idea is to know the meaning to everyday words used of the period in question.


So, let's look at the word IDIOT as defined in Webster's Dictionary of 1880 (of interest is definition number 1). 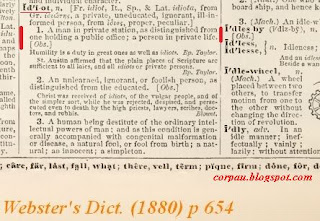 *Idiot - 1. A man in private station, as distinguished from holding public office; a person in private life (see illustration above).


Some others DEFINITELY are a perfect fit to the other descriptions, but we'll put that aside for the moment.

The entire dictionary (300MB) can be downloaded from the link below :

Posted by AuCorp at 6:30 PM No comments:


Why the government of a penal colony, of course!


You can bet your 'Constitution' it is!

And this scum wants to be the Prime Minister of Australia.

We already have enough treasonous bastards without having to deal with another piece of garbage in office.

Australia's government a real criminal force against the people?

You can read the article from 13 July 2016 by news.com.au of the headline:

The dramatic downfall of the Salim and Aysha Mehajer love story 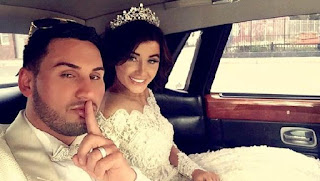 Is the Salim and Aysha Mehajer fairytale life over?

IT’S the fairytale romance that looks to have turned into a nightmare.

Barely 12 months after controversial former deputy mayor Salim Mehajer married his sweetheart Aysha, the relationship could all but come to an end this week.

NSW Police, acting for Mrs Mehajer — going by her maiden name Aysha Learmonth — lodged an application for an apprehended violence order (AVO) on Monday against her husband. This morning the AVO was extended until next month which means they will not be together for their first wedding anniversary on August 15.

Neither Mr Mehajer or his wife Aysha were at the Downing Centre Local Court when the matter was mentioned.

Mr Mehajer agreed to the standard orders — which say he must not harass, assault, menace or stalk her — contained in the AVO, but indicated he wanted to vary or challenge orders that prevents him going within 50m of her home and/or work and must not approach her.

The only contact between the couple is to be via her lawyers.

Mr Mehajer has always insisted the dream is still alive when it came to he and his wife. Yesterday, he told news.com.au “only death will do us apart”. But, increasingly, it seems like wishful thinking.

But for the first time, Mr Mehajer conceded his wife had moved out of their marital home in Lidcombe, western Sydney although he claimed he saw her “every day”.

The Daily Telegraph reported that Mrs Mehajer had indeed recently met her husband but the reason was not to reconcile, but to seek an amicable split — a request he is said to have ignored.

A marriage that looks like it will end with a miserable whimper in a dreary Sydney court started with a lavish, glittering bang one sunny afternoon last August.

Four helicopters, a jet, a sea plane and a motorcade of luxury sports cars and motorcycles greeted bemused residents in the western Sydney suburb of Lidcombe as they found themselves hemmed in by the extravagant outdoor ceremony which saw Aysha and Salim tie the knot. 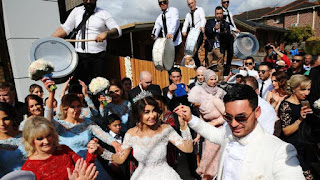 On her big day, clad in a 22kg extravaganza of French lace and Swarovski pearls and diamonds, and with a beaming groom doting on her, she easily outshone any flashy motor.

The spectacle would catapult the couple to national stardom, while sharpening the crosshairs of the Auburn councillor’s critics.

He was the successful Sydney property developer, his apartments rising in the commuter belt east of Parramatta. She was the Wollongong beauty therapist, originally called April, who fell for the charms of the man dubbed “the councillor of conspicuous consumption”. 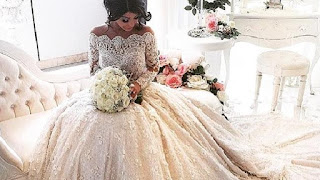 The transformation, from blond haired April, to dark-haired beauty with chiselled looks, was miraculous.

So convincing was her metamorphosis that three months before the wedding, she was proclaimed Miss Personality Miss Lebanon Australia.

“I don’t recognise her but I think mostly anyone who knew her back then wouldn’t recognise her now,” Tracey Rovere, former principal of the Illawarra College of Beauty Therapy, who trained “April”, told the Daily Telegraph.

“Her hair was straight and red and then, for graduation night, she surprised us all by going and getting this amazing spray tan that concealed her freckles and had her hair lightened to strawberry blonde. She had this total Cinderella moment.” 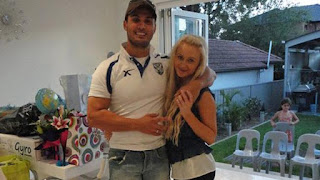 Salim Mehajer and Aysha, before they married. Source: SuppliedSource:Supplied
HAPPY

A pre-wedding video provided the cheesiest moment of the couple’s celebrations.

It saw Mr Mehajer re-creating the first moment he laid eyes on his now wife.

There’s romance, drama, self-aggrandisement, even some guns, and finally Mr Right gets down on one knee as he presents Aysha with the ring she’s being waiting for.

After the last piece of confetti fell on the otherwise sleepy Sydney street, Mrs Mehajer fell into what, initially at least, seemed like a happy existence. She hung out with her husband’s stunning and sculptured sisters and even helped do a bit of fundraising, drawing the crowds at a local Macca’s for McHappy Day. 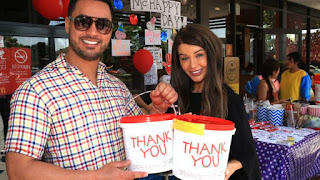 When her husband, a few months later, graciously offered his services to the nation as a future prime minister, a serene Mrs Mehajer stood majestically behind him.

By November, the partnership went from the romantic to the business as Mrs Mehajer became director of several of her husband’s companies.

But storm clouds were brewing. Mr Mehajer was under increasing scrutiny for his business dealings and decisions made by Auburn councillors during his tenure as deputy mayor.

In February, Mrs Mehajer dramatically went into bat for her husband, pleading for his political life so he could build a multimillion-dollar block of units.

She wrote to Local Government Minister Paul Toole, asking him not to sack Auburn Council which would strip Mr Mehajer of his mayoral robes.

Mr Toole had singled out a decision made by the council to sell a council-owned car park in Lidcombe to the Mehajers, upon which its company — Sydney Constructions and Developments (SCD) — hoped to build an apartment block. If the council was sacked, the sale would be unlikely to go ahead.

“SCD is prepared to do all the things to protect its rights which arise under existing contract, including if the Minister interferes with those contracts,” she wrote ominously.

The Government wasn’t impressed and not only sacked the council but then disbanded it altogether, amalgamating it out of existence. The sale of the car park evaporated. 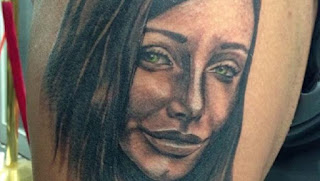 Salim Mehajer reportedly got a tattoo of his wife Aysha. Picture: SuppliedSource:Instagram
NO SHOW AT BIRTHDAY PARTY

As Mr Mehajer’s political career and business plans began to unravel it was followed soon after by, seemingly, his relationship as well.

In April, he held an extravagant 30th birthday party for his wife which included shelling out $50,000 for US musicians Tyga and Omarion to attend.

The rappers took happy snaps on the mini-mansion’s illuminated spiral staircase and posed with a birthday cake.

The only thing missing? The birthday girl.

In fact, she hadn’t been seen for weeks. 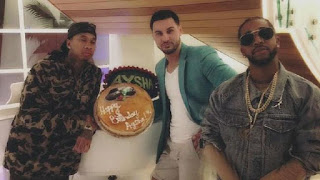 Salim Mehajer posed with rappers Tyga and Omarion — but where was his wife? Picture: Instagram.Source:Supplied

Soon afterwards, a romantic video emerged of Mr Mehajer — but it featured another woman.

The video, essentially a flip book of images, showed Mr Mehajer and a woman identified as “Hooda” embracing and, in some images, kissing.

“God sent me an angel” is daubed across one image of the couple. “I be his bonnie, he be my clyde [sic]”, is written across another.

A date of November 2014 crops up a number of times. If Mr Mehajer and Hooda were indeed an item then it would have been when he was already betrothed to his bride-to-be.

Later in the same month, Mr Mehajer was forced to furiously deny that his marriage was on the rocks despite reports he went to a house his wife was staying in and was found “yelling” and “screaming” while trying to knock the door in.

Mr Mehajer allegedly went to the house, in Wollongong, and demanded the keys to a Mercedes car his wife had been using, reported the Daily Telegraph. She was said to have escaped to the Gold Coast. 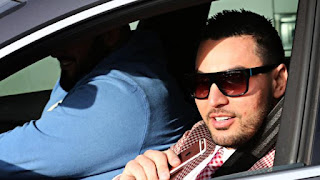 Salim Mehajer pictured leaving his house in Lidcombe. His wife Aysha applied for an apprehended violence order against him, on the eve of their one year anniversary. Picture: Adam YipSource:News Corp Australia

‘OUR LOVE IS TOO GREAT’

As the rumours cranked up, Mr Mehajer took to social media uploading pictures of he and his wife in happier times.

“Our love is too great to destroy,” said one post following the alleged incident in Wollongong.

On the weekend, Mr Mehajer uploaded a picture of him looking adoringly at his wife with the caption “You put the smile on my face, the sparky in my eyes and the Love in my heart.”

He insisted to news.com.au the image was recent but the two have not been spotted together for months.

Despite Mr Mehajer’s protestations to the contrary, the fairytale that began on a Sydney street looks to be fading fast.