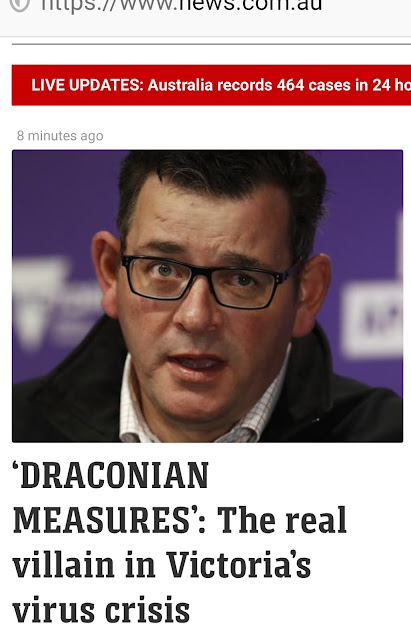 Just one of a few class action lawsuits is being prepared as you read this post.

From the first allegedly recorded case of the virus in Victoria on the 25th of January 2020 to the newly actioned stage 4 restrictions, where a so called (discriminatory) directive where ‘workers’ (whatever that means) can only purchase products to repair homes, etc from their local hardware store, the government of Victoria has committed many unlawful actions and failures with regards to the reaction to the matter at hand.

The people in government were even so blazé to state that it's not a matter of human rights, where in reality every action at law must be consistent or subservient to human rights law, period.

The legal community (as opposed to ‘conspiracy theorists') has taken notice, that the law has not been followed, nor the lawful procedure for enacting Acts, where various class action lawsuits are in motion.

The Victorian government has a lot to answer for, where a royal commission will not suffice or rather be next to useless, as seen in the banking sector royal commission, so a class action is one of the ways.

We encourage all Victorians to join in the class action, where once the infrastructure has been put in place, we will point you to it.

Six weeks lock down but Andrews signed Victorians up for four

There are a lot of inconsistencies with regards to alleged case numbers, what's happening and what's going to happen.

As seen in screen capture below, the Victorian premier Mr. Daniel Michael Andrews signed up Victorians to Stage 4 restrictions from the 2nd day of August 2020 to the 2nd day of September 2020, which is one month or just over 4 weeks. 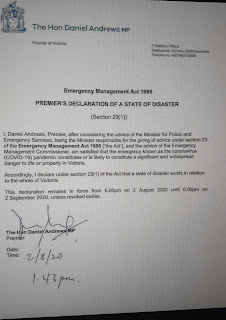 The mainstream media have been 'advertising' for quite some time that Victorians will be locked down for six weeks with this new restriction.
Posted by AuCorp at 12:37 PM No comments: 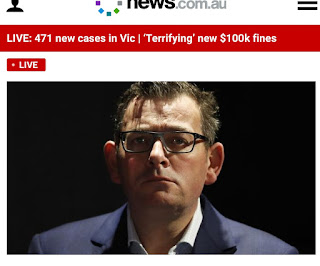 According to Victorian premier Mr. Daniel Michael Andrews "It's not about human rights"

Um, it's ALL about 'human rights' and no law that is put in place can diminish this.

FROM the Victorian Government Solicitor's Office,

Section 10 Protection from torture and cruel inhuman or degrading treatment

Examples of ‘cruel, inhuman or degrading treatment’ may include:

No power to suspend Acts of Parliament by Daniel Andrews? 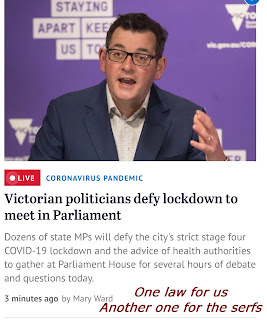 The premier of Victoria Mr. Daniel Michael Andrews has run amock with regards to law in an unprecedented move.

Well, the above sentence is not entirely true.

The people in government were in a lawless state, i.e. at a level where the law did not apply to them.

The imperial government had enough and reigned them in reminding them they must follow the law, e,g. Bill of Rights 1688 (UK), etc and put in an Act called the Colonial Laws Validity Act 1865.

The same holds true today, where the law applies and the entire law making process must be followed prior to making an announcement that an Act is in force. 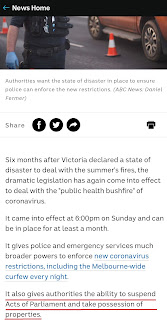 During Victoria's alleged notification of the 'State of Emergency/Disaster' the authorities have stated that Acts of Parliament can be suspended, also giving the ability to take (people's) possessions.

Is there a need to remind the general population that taking people's possessions unlawfully is theft, and depending under which circumstances can also be classified as armed robbery.

There is no lawfully enacted legislation in Victoria that allows the Acts of Parliament to be suspended.

While the imperial government had enough of the 'shenanigans' of those in government, it seems that Victorians will gladly accept their possessions being taken unlawfully.

No power to make 'State of Emergency' by Daniel Andrews?


From the following source:
https://www.parliament.vic.gov.au/images/stories/committees/paec/COVID-19_Inquiry/Submissions/14a._Brianna_Melville.pdf

Posted by AuCorp at 7:43 PM No comments: 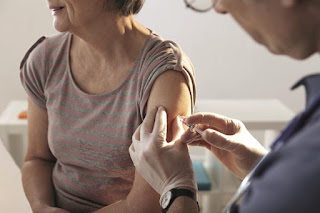 MANY persons in government commit illegal and/or criminal activities where they do not get caught.

A saying that has been around for a while is that “Everything’s legal until you get caught” .

While we cannot speak with regards to legislation in other states, the Victorian Government has been acting ‘illegally’ with regards to mandating (i.e. forcing you into medical treatment),  that people involved in aged care be vaccinated for the flu, which as we know will have zero effect against the novel Coronavirus.

One would think that this is ‘big news’, news that should be covered by the mainstream media, but has not been.

All we are able to say at this point in time is that the Victorian Government has been caught out by a team headed by a legal professional  and not ‘conspiracy theorists’.

In response to the virus, the Government of Victoria has committed to actions / mandates / directions etc unlawfully, but that is another post for each action concerned.

We will state unequivocally that the up and coming ‘Stage 4’ restrictions for Victorians by the Daniel Michael Andrews government will be an unlawful action.

As to how, once again more on that later.

Fool me once, shame on you fool me twice shame one me.
Posted by AuCorp at 10:45 AM 2 comments: