Australian authorities forcing you to use smart phones 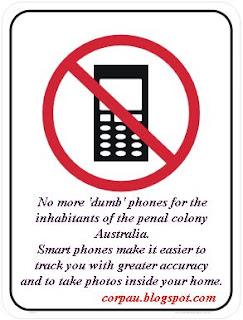 To the average consumer the path of technology and the way the authorities utilise this technology can be viewed as progress, but as always there is another aspect to the matter, in reality actions that use the technology may have more sinister consequences behind it.

In recent news that had a lot of chatter on social media, was enormous the fail with regards to the ABS (Australian Bureau of Statistics) online census login, where the servers (allegedly) crashed.

From a governance point of view, this is a huge failure of governance.

The ABS website did not have adequate security compromising every single person's details, despite the fact that the ABS stated that its site was secure.

This was a deliberate lie by the government/business called ABS.

It was also revealed that the ABS sold (your?) data for $41 million last year.

Therefore as a result you cannot trust the government with any of your census data.

Many reports emanating from the corporate media with regards to your duty/compulsion to fill in the census form, and the lawfulness to do so are false / incomplete / deliberately misleading.

So now the government is making apps, forcing urging its people to fill in form online (cheaper/quicker/easier to administer).

But there is one HUGE problem with this.

Your data is NOT secure nor is it private.

Some people still are in a 'we will not comply'  attitude, by not having a 'smart phone'.

So, the boffins in 'government' never fail to disappoint and have a solution for that.

Under the guise of 'progress' your old 'brick' / flip / dumb phone will be switched off.

Well not literally it but rather the technology (frequencies) it depends on will be.

Therefore you will have no other choice than to purchase a 'smart phone'.

Although the newer technologies 3G, 4G, LTE may use some of the 2G frequencies, they are not backward compatible, and require new hardware - 'smart' phones.

Telstra will be switching off their 2G network in December 2016, Optus in April 2017, and no official word from Vodafone for the moment.

In many interactions with the government, e.g. social security, you are 'encouraged' to use an app or their website and not come into an office or interact with a man/woman behind the counter.

Pretty soon the British penal colony commonly referred to as Australia will be administered by unseen or unknown entities in some 'cloud'.

It would almost be 'heavenly', to be administered by some sort of digital gods.

Keeping in mind that the corporation conglomerate known as the 'government' is fully aware that 'your' data is neither safe, secure nor private via this carriageway called the internet.

How can you trust a 'government' that failed to keep your data secure and one that sells it for profit, year upon year?

Posted by AuCorp at 8:34 PM No comments: 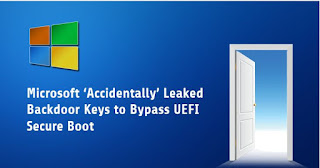 It's True — There is no such backdoor that only its creator can access.

It will be impossible for Microsoft to undo its leak.

Secure Boot is a security feature that protects your device from certain types of malware, such as a rootkit, which can hijack your system bootloader, as well as, Secure Boot restricts you from running any non-Microsoft operating system on your device.

In other words, when Secure Boot is enabled, you will only be able to boot Microsoft approved (cryptographically signature checking) operating systems.

However, the Golden Keys disclosed by two security researchers, using alias MY123 and Slipstream, can be used to install non-Windows operating systems, say GNU/Linux or Android, on the devices protected by Secure Boot.

Moreover, according to the blog post published by researchers, it is impossible for Microsoft to fully revoke the leaked keys, potentially giving law enforcement (such as FBI and NSA) special backdoor that can be used to unlock Windows-powered devices in criminal cases.

This specific Secure Boot policy was created and signed by Microsoft for developers, testers, and programmers for debugging purposes.


"During the development of Windows 10 v1607 'Redstone,' MS added a new type of secure boot policy. Namely, "supplemental" policies that are located in the EFIESP partition…" researcher said.

"...a backdoor, which MS put into secure boot because they decided to not let the user turn it off in certain devices, allows for secure boot to be disabled everywhere!"

Yesterday, Microsoft released August Patch Tuesday that includes a security patch for designing flaw in Secure Boot for the second time in two months, but unfortunately, the patch is not complete.

And whoever said there are no back doors in 'their' operating systems is a liar.
The company's sometimes shortened name MS should stand for Mass Surveillance.
Posted by AuCorp at 8:25 PM No comments: 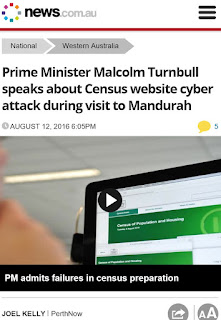 the imbeciles in government who are in charge of;


have failed in keeping your data safe, secure and free from compromises.

The government has stated that your data will be secure when you log into the ABS website, despite the fact that a simple secure website was NOT in place when one was to provide private and confidential data to this business.

The government is also fully aware that all traffic on the internet is NOT secure, despite this fact still tells the masses that their data is secure.


You have been threatened via television and radio messages that if you do not fill in the census form you will be fined, even up to $180 for every single day the census form has not been returned.

What no 'authority' has told you, is that you do not have to pay the fine.

You can contest the fine in a court of law, as this is the right of every 'person' according to Australian law.

What lawfully enacted laws are in place that allow a company called the ABS to 'fine' you?

What the government or corporate media will not tell you: NONE.

What laws are in place that 'fine' the company known as the ABS for not keeping your data safe?

Keep in mind that the ABS, last year sold (your?) data to the tune of $41 million.

What was your dividend from that sale?

The government has provided too many instances of false / misleading information to the masses with regards to data collection by a business called the ABS.

Therefore as a result we cannot recommend any man or woman to provide information to the business known as the ABS (Australian Bureau of Statistics, ABN: 26 331 428 522), registered in the state of Western Australia, also trading under the name of: Bureau Of Statistics Western Australia.

See also other posts in relation to the census / Australian Bureau of Statics from the blog Corporate Australia:


More lies from the Australian Bureau of Statistics

The Australian Census 2016 - What you really need to know?

Posted by AuCorp at 7:38 PM No comments: