Whistle blowing for the tax office for free?

So, let's get a few fundamentals out of the way;

1). To pay or receive payment from the ATO (Australian Tax Office) in a personal capacity is a voluntary transaction.

2). Documents suggest that the ATO is not a legal entity.

3). The people in government, screw whistleblowers over with zero protection.

Due to the incompetency of the ATO, or maybe not so legal foundation, the buffoons at the office now want the people to work for them for free, with alleged protection within something called 'national privacy laws'. 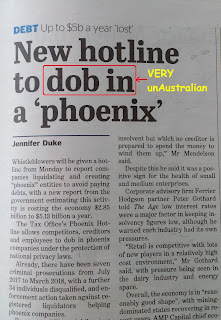 The privacy of the general population within the colony called Australia is a joke, at the expense of the people's privacy.

Information is fairly easily obtainable on a person, if one knows where to look or who to ask.

Did you comprehend what happened to whistle-blower Queensland police officer Rick Flori when he reported criminal activity?

Did you read the documents whistle-blower Edward Snowden released?

So, the ATO allows multi-billion dollar corporations to pay negligible tax, while at the same time harassing  hard working Australians, where now they want you to work for them for free.

In what mind altering psychotic state, would one have to be to agree to this lunacy?