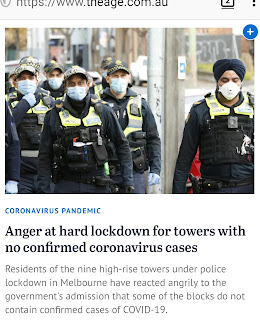 How can one trust any government with regards to any alleged cases of Coronavirus, when it illegally locks up people claiming they have the so called virus, when not one single person from the locked up pool has actually tested positive.

Well, it’s a joke where the poor usually pay for it at the end of the day.

Victorian Premier has gone on a Nazi style rage against the people under the Coronavirus excuse.

The so called claims that virus ‘hotspots’ exist in Victoria can be easily called out to be false, given the fact that the towers residents cases are at zero, where it’s an excuse to take the policies of the police state to a new level, under whatever falsely enacted law the government may claim the actions to be legal under.

By the very figures that government gave out, Australia has now approximately 1/10th of the of people allegedly suffering from the Coronavirus than it did a couple of weeks ago. 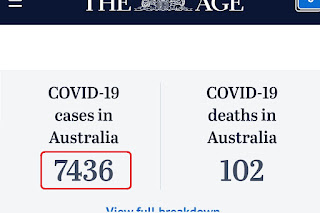 The above figures as reported on the 20th of June 2020, where the figures 10 days later are shown below: 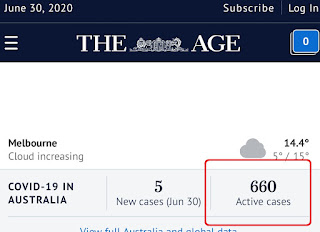 So why the Dystopian agenda?

No 'hotspot' in Malvern where Andrews lives?

In any event there should be a class action lawsuit against the government regarding the Coronavirus lockdown and incarceration of people in their own homes, as already a few laws have been broken.

Realistically premier Dan Andrews should be removed from office, but as we know the ‘brotherhood’ looks after its own, where it is doubtful that will occur.
Posted by AuCorp at 9:35 AM

I'm needing help for some single mothers that are Australian women that are ready to speak out. How can I help these women? Can someone please help me help? One young 17year old mother is in one off those apartments with a young baby who has immunity problems and is scared to death.

PLEASE I need help helping some single Australian women that are ready to speak out about the towers . PLEASE help me help them.

One picture shows total cases, the other shows active cases. Although I don't agree with what is going on, misinformation doesn't help. You're trying to do a good thing, but do it the right way.

Corona crap I wrecon. 5G is causing the people to appear sick with "flu-like"symptoms. Does not say FLU symptoms. 4G =Sars Virus!