Death verdict for man with 80 wives

An Islamic body in Nigeria has issued a death sentence on a man who married 80 women well above the maximum of four allowed, the Guardian newspaper reports.

The Jamatu Nasril Islam (JNI), one of Nigeria's top Islamic bodies, said in a statement that Mohammadu Bello Masaba from the central Niger state stood condemned to death unless he divorced 76 of the women in four days.

"Unless Masaba repents within four days and take only four wives from the herd he remains condemned to death, according to Sharia law," the statement said.

"Any Muslim who married more than the approved number of wives at a time either by mistake ( if he had amnesia, he could be excused ? ? ? ) or out of ignorance is instructed to choose but only four and ask for Allah's forgiveness," the group said.

Since the return of Nigeria to civil rule in 1999 a dozen predominantly Muslim states in the north have re-introduced a strict version of the Islamic Sharia legal system.

The northern states pride themselves on applying a mild form of Sharia, with no deaths by stoning carried out and few amputations.

Still struggling to comprehend what he married cows, sheep or goats ??? !!!

Feeling much safer now that there are fewer amputations !

The family of a young Papua New Guinea girl injured in a hit-and-run allegedly involving an Australian adviser want him returned to Port Moresby to face court.

Ten-year-old Sofi Ebe's pelvis was broken in three places when she was hit outside Port Moresby's popular expatriate bar, The Weigh Inn, about 10pm on Friday, August 1.

Coffey International PNG country manager Neville Saunderson said the company flew their employee to Australia the next day, and sacked him a short time later.

Saunderson said the company was cooperating with PNG police and would pay for all damages.

"We believe our decision to fly him to Cairns was justified," he said.

"We took advice from our PNG security firm as there were concerns about his safety and psychological circumstances.

"He was in a very distressed state."

The Australian flew to Cairns on August 2 and was admitted to Cairns Base Hospital the following day until his discharge on August 6.

A PNG police investigation is underway with an official saying the Australian should have faced charges including driving while intoxicated, dangerous driving, causing injury to a person, and failing to stop after an accident.

The girl's family have called on Australian authorities to return him so that he can pay traditional compensation money and face PNG law.

The Southern Highlands girl was with her mother and father who live in the nearby Konedobo settlement opposite PNG's police headquarters.

Sofi, who uses crutches to walk, said she was in constant pain.

"I was afraid and I ran. I was confused, it happened so quickly," Sofi said.

"I was scared and turned to run but the car came and I was cornered by another car and got hit."

Sofi's father, Solap Ebe, said he was happy Coffey International had paid for the medical costs and other bills and had accommodated the family in a rental apartment, but he wanted their former employee to face justice.

"He hit the cars, my girl and ran off. Police didn't get a chance to arrest him," Ebe said.

Ebe said he was worried there may be future complications in his daughter's hip and wanted the Australian government to return the man to PNG.

"He's a big official but he's not above the law," Ebe said.

"The Australians must bring him back. We will not fight him or hurt him. We just want him to face court and pay compensation."

Weigh Inn general manager David Austin confirmed there had been an accident and said police attended while he rang Australian officials and an ambulance for the little girl.

What in essence we have here is the Australian's Government support of a hit and run offense.
The government whisked him away before any charges could be laid.

Whilst externally it sounds nice that a firm is in PNG for 'aid', it is the attitude that is disgraceful, and a true indication of what is really thought of the native population. Who cares about a native girl? Clearly not the Australian Government.

During the early settlement of Australia, the English would go out on 'hunting expeditions' to kill a 'quota' of Aborigines. This happened only a few generations ago, and is an insight of how the aristocracy see the people as 'sub-human'.

An attitude that is not very distant today, as evident in the above story.
Posted by AuCorp at 1:18 PM No comments:

Coca Cola - as expensive as petrol 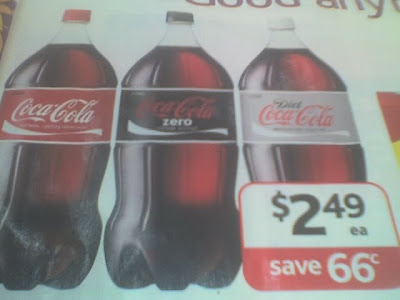 Depending on location in Australia, petrol prices can vary significantly.
If we take the price of $1.50 per litre, without the government tax, Coca cola IS more expensive than petrol. This has usually been the case over the years.

When one puts into perspective of what refining process is needed to create petrol from crude oil, one can appreciate the magnitude of Coca Colas profits.

Sadly these products will exist as long as the 'cattle'* will buy them, as portrayed in a racist comedy sketch by Jackie Mason - J ews and Gentiles.

* a term used to describe people of non-J ewish origin.

Coca Cola as healthy for you as petrol.

THEY LIED ! Didak was with Shaw in car crash 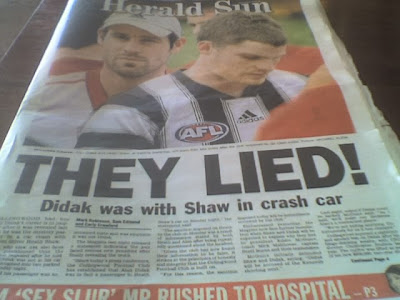 Front page gripping news, as reported in the Herald Sun.

Nothing less than 6 of the first pages to report on a bunch of Trailer park footballers.

The H.S sees it fit that it MUST inform the nation that the two losers were involved in a car crash.

It is unfortunate that the general media 'idolises' the cretins of football, rather than more important issues / aspects of society that have a larger impact on the community as a whole.

This is deliberate politics to keep the masses amused with menial / trivial events.
Posted by AuCorp at 12:21 PM No comments:

A man has died after falling into an open fireplace at a hotel in central Victoria, police say.

Police said the 49-year-old man had been sitting alone on the fireplace ledge in front of a fire in the Kangaroo Flat Hotel beer garden in Bendigo.

Shortly after 7.45pm (AEST) Monday a hotel staff member noticed that the man, standing about eight metres from the fireplace, was on fire, police said.

Staff extinguished the blaze with a garden hose.

Rural Ambulance Victoria spokeswoman Gabrielle Degenhardt said paramedics treated the man at the scene about 8pm before he was rushed to the Bendigo Hospital.

He was then airlifted to Melbourne's The Alfred hospital in a critical condition with burns to 65 per cent of his body, including his face and torso, she said.

Hotel management refused to comment when contacted on Tuesday morning.

Constable John McIlath of Bendigo Police said the brick fireplace was built into a side outdoor wall of the beer garden, with a hearth raised off the ground for patrons to sit on.

He said a fire guard had not been in use when the man caught on fire.

"There is a guard, it's a removable guard, but it's not known who had removed it," Const McIlath said.

The man was still conscious when police and ambulance crews arrived on the scene.

Any alcohol consumed by the man would not be known until the toxicology report was completed during the post mortem examination, he said.

He said there were no suspicious circumstances.

Worksafe investigators who attended the scene on Monday night were satisfied that the hotel had taken appropriate steps to safeguard the fire, Const McIlath said.

Who cares right? Probably some drunk that died anyway.

The question that begs to be answered is who's payroll is the Worksafe Officer on anyway?

Aussie jailed in Thailand over murder

An Australian man has been jailed in Thailand for the shooting murder of an American tourist during a drunken quarrel.

William Douglas, 65, admitted to shooting Gary Poretsky, 46, in March this year after the two got into a drunken argument at a restaurant in the northern city of Chiang Mai.

Poretsky, from Hawaii, suffered three gunshot wounds to his face and chest.

A court on Monday sentenced Douglas to two years and nine months in jail after deciding the murder was not premeditated.

Douglas was originally from Perth, but had been a long time resident of Thailand, the ABC reported. He will serve out his sentence in Chiang Mai.

2.75 years for killing someone, whilst others face life in prison for importing drugs.
Posted by AuCorp at 11:30 AM No comments:

Solar : Going green good for your green (back)? 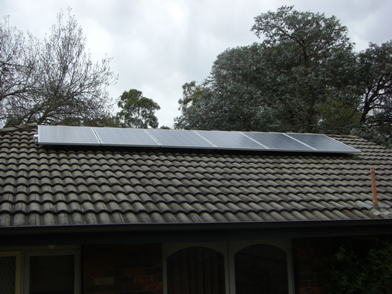 We are all encouraged by governments to save the environment in one way or another, and when we do, we will have a warm and fuzzy feeling inside.

But, Just how practical, and cost effective is this kind of exercise? Just what are they NOT telling us?

Here is what they are NOT telling you:

The average sunlight for the majority of households in Australia is max 6 hrs per day with 5 being the normal in the southern states.

During the transfer from DC to AC there is a loss of energy of approx 10%.

An average household ( family with 2 children), during winter with gas heater and hot water service, can easily consume 1kw/hr during the day, and during the evening during peak - cooking, tv computers etc, can use 1.5kw/hr.

At night during the mandatory sleep period (e.g 8hrs) 0.3kw/h can be consumed, fridge and small electrical appliances.

To have your house totally isolated / independent from the power grid, an OPTIONAL battery backup MUST be present.

Now for the calculations.

For ease of calculation, we have used 20kw for the day, and only generated 5. Therefore with 1kw panels we have only met 25% of our power needs.
NOT GOOD ENOUGH !!

1kwhr from the electricity grid is worth approx $0.16 to the domestic market. Therefore a day's worth of electricity can be worth $3.20.

During the summer periods it is not uncommon to have an air conditioner (min 3hp /2.2kw) turned on.

This is also without the ADDITIONAL battery storage of minimum 4kva for the average household.

The above example is only an indication, and other variables can make your application more suitable or less suitable for solar electricity, e.g.
Swan Hill (80% sunshine), the desert,
Tasmania - Wind generators may be more effective, etc.

The government has not really addressed this problem to be beneficial (financially) to the public, but has taken some sort of action, to appear as if it is pro-active.
MYTH BUSTED !!
Posted by AuCorp at 5:13 PM No comments: 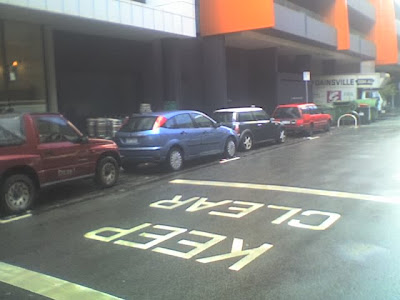 Slowly but surely, Melbourne's City Councils have made it more and more difficult to access parking within the city and it's surrounding suburbs.

This is a general policy that will eventually lead to the closure of traffic in certain areas in the city, as it has been in Europe for quite some time. These policies have already been outlined.

One advantage of owning a small car is that you can squeeze 4 cars into 3 parking bays, as shown. Just who's the lucky one not to pay.
Posted by AuCorp at 1:35 PM No comments: 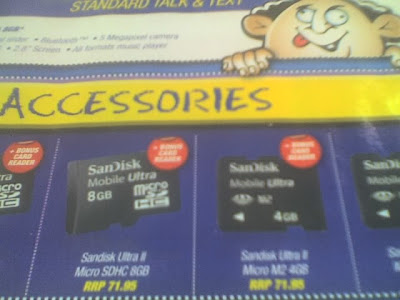 (illustrations shows you have to be retarded to buy Sony)

Any manufacturer that forces consumer to buy its proprietary technology has a detrimental policy to the consumers wallet.

None being more true than in the example of Sony. Sony has locked consumers into buying Sony's proprietary memory (M2) whilst other manufacturers e.g Canon, HP, Kodak, Panasonic have adopted the widely used SD memory media.

Current prices, as illustrated, show that for the same AUD$72 you can buy a lot more (8GB) of SD memory compared to the 4GB that Sony offers.

Posted by AuCorp at 1:06 PM No comments: