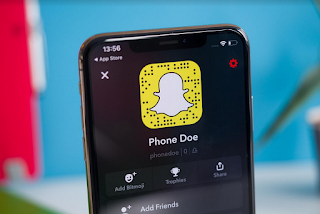 Just because messages and videos on Snapchat sent in Chat disappear after being read doesn't mean that this content is safely hidden from prying eyes. According to Motherboard (via SlashGear), this data does end up on Snapchat's servers, even if for a brief period of time. And apparently, some employees of Snap (Snapchat's publicly traded parent company) used a special tool to access this content.

Using a tool called SnapLion, created to help law enforcement access information from Snapchat accounts (with a court order or subpoena), some Snap employees were able to access customer data. Snaps that had not yet been deleted, location data, email addresses, and phone numbers were allegedly viewed illegally by people working for the company. These allegations were made by former Snap employees.

Not every person working for the firm uses the SnapLion tool illegally. It is employed by Snapchat's security team and those inside the company who are looking out for members who create abusive posts that bully, harass or spam other members. Snapchat monitors those who use the tool, but apparently, this is not a perfect system according to a former employee. Another person who used to work for Snap said that having access to SnapLion was like owning "the keys to the kingdom."

A Snap employee wouldn't admit that the SnapLion tool was abused by employees, but did say that the company had a "good system in place" to prevent such things from occurring "most likely earlier than any startup in existence."

Snap did issue a statement in which it claims to hold on to only a small amount of user data. The company added that its "robust policies and controls" limit who can see it and anyone employee who views the information without proper authorization is immediately fired.
"Protecting privacy is paramount at Snap. We keep very little user data, and we have robust policies and controls to limit internal access to the data we do have. Unauthorized access of any kind is a clear violation of the company's standards of business conduct and, if detected, results in immediate termination."-Snap spokesman


This past January, Snapchat added end-to-end encryption three years after Amnesty International had Snapchat ranked as one of the least protected messaging apps in terms of member privacy.

Source: phonearena.com
Posted by AuCorp at 12:25 PM No comments:

Nefarious push for your data to be online 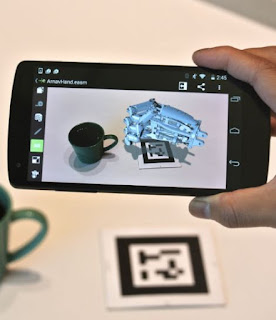 There is a huge (nefarious) push by corporations (who are in bed with governments) to force / entice / reward users to put all their data onto the internet under a mystical marketing label called the cloud, which in reality is someone else's computer systems.

You are 'enticed' to upload your private and confidential data like your PRIVATE passwords,  POS (Point Of Sale) figures, your accounting software's analytics, your private correspondence you composed in Microsoft's products, for 'free' where now you can even use apps to create CAD (Computer Aided Design) drawings which realistically is MAD (Mobile Aided Design?), in order to capture every part of your life. 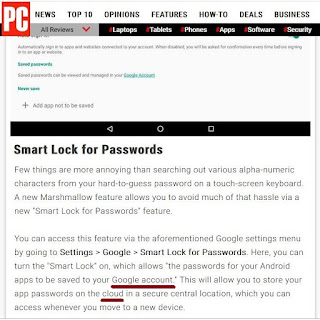 Technically nothing is for 'free', where people may associate this term, as being without charge, but there is a cost attached, just maybe not passed onto that 'person', at that very instant of the transaction taking place, or it is incorporated elsewhere.

YOUR data stored on a 'free' platform is no longer 'yours' which basically means that this data is used for monetary gain, in whichever way the storage provider sees fit, whether it's disclosed or not.

Once upon a time if authorities needed access to your documents, then (maybe) a search warrant had to have been issued, together with a fair few able bodied people travelling in a gas guzzling vehicle to the place of interest, where a break in may had to occur with the possibility of a scuffle or three, where maybe filing cabinets needed to be removed and sifted through.

All this hard work is now obsolete, where you the 'data generator' stores ALL your information for 'free' in the cloud, where warrants are a distant faded memory and your data is obtained by one person to do what they have been instructed to do, or even do whatever they choose themselves to do with that data.

The 'problem' there is that too many people are choosing to give their data to unknown sources for free, i.e. no monetary compensation.

Now now, let's not make too much noise with the "nothing to hide nothing to fear" propaganda slogan.

Posted by AuCorp at 3:25 PM No comments:

Australian politicians (only) in it for themselves 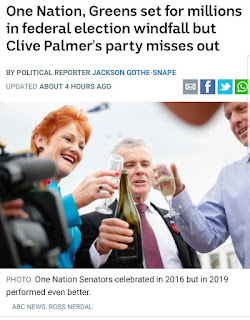 While people may have an opinion about politics in this colony we call Australia, many do not comprehend the reality behind the public farce.

The above headline from the mainstream media is just the tip of the iceberg of what the so called elected are on about, that being only in it for financial gains for themselves.

One of the greatest scams the public's tax dollars are going to is also the superannuation package of those who are there to allegedly serve the public, where in reality they are serving their 'brethren', with the policies they produce, that enriches their ilk, and plunders the rest of society deeper into poverty.

No to worry the serf population will still (allegedly) vote for the duopoly.

Australia sure is a 'lucky country' ... as it certainly is not a clever one ;-)

Posted by AuCorp at 8:45 PM No comments: 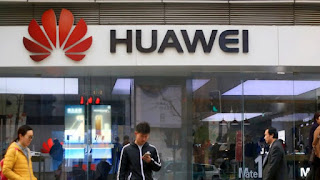 In a surprise move, Google has halted its business operations with Huawei, one of the leading mobile phone manufacturers in the world, effective immediately — a report by Reuters notes. The halted business streams include anything in relation to the transfer of hardware and software products except the open source ones. If accurate, this can send shockwaves across the world and massively impact Huawei users and businesses all over the world.

“Huawei Technologies Co Ltd will immediately lose access to updates to the Android operating system, and the next version of its smartphones outside of China will also lose access to popular applications and services including the Google Play Store and Gmail app,”

See also: Huawei has an alternative for Android if things go sideways with the US

Last Thursday, Trump administration had added Huawei in their trade blacklist and owing to that it will be extremely difficult for Huawei to do business with US companies. Google is one of the US companies with the highest number of consumers in the world using its open-source operating system Android.

The move will put the users of Huawei smartphones in limbo, they won’t be able to get any new Android updates, security patches and even will lose access to Google Play Store which makes a huge portion of Android phone experience. The list of smartphones includes the recently launched high-end flagships of Huawei including P30, P30 Pro, Mate 20 Pro, and the list continues.

See also: In a shocking move, Intel and Qualcomm also cut off Huawei

Huawei, in just the recent quarter of 2019, shipped more than 59 million smartphones which makes a huge chunk of devices powered by Android Operating System. A source closer to the matter mentions that Google was forced to end ties with Huawei as a result of trade blacklisting of Huawei in the US. Otherwise, Huawei was expected to become the biggest seller of Android-powered devices in the world beating Samsung and other Chinese smartphone manufacturers by a good margin.
Huawei will continue to have access to the licensed open source version of the Android operating system, which is available for everyone to use.


See also: How Huawei business ban by Google will impact its smartphone users

Huawei has said,
“Huawei has made substantial contributions to the development and growth of Android around the world. As one of Android’s key global partners, we have worked closely with their open-source platform to develop an ecosystem that has benefitted both users and the industry.

Huawei will continue to provide security updates and after-sales services to all existing Huawei and Honor smartphone and tablet products covering those that have been sold or still in-stock globally.
We will continue to build a safe and sustainable software ecosystem, in order to provide the best experience for all users globally.”

But in a recent interview to a Japenese publication Nikkei, Huawei’s CEO Ren had mentioned, “Huawei’s growth might slow under the U.S. restriction, but only slightly.”

The recent move by Google is going to change the power game between different smartphone manufacturers but only time will tell how Chinese smartphone companies and Chinese establishment will react and respond over this.

Update – 1:36 pm PST: Huawei has given an official statement on this development and the story has been edited to reflect that.

Update – 9:57 am PST: Google has gone on to Twitter to give an update on halting the license of Android for Huawei. The update mentions that the current Android phones will continue to have access to Google services and applications. It means that the upcoming devices of Huawei will be impacted as a result of this development.

For Huawei users’ questions regarding our steps to comply w/ the recent US government actions: We assure you while we are complying with all US gov’t requirements, services like Google Play & security from Google Play Protect will keep functioning on your existing Huawei device.
— Android (@Android) May 20, 2019

Posted by AuCorp at 8:26 PM No comments:

Homelessness - A policy of being punished for being poor

It does not matter who is elected into government, where many so called democratic governments (deliberately) do not address homelessness and if they did, the results would truly speak for themselves.

The people in government of many countries punish people for being poor and reward those who are rich, or part of elite 'men's clubs', where Australia is no exception, but rather a model to aspire to for other governments who wish oppress their people, where the difference is  all about the general population's perception that they're not being oppressed.

In the midst of record population import into the state of Victoria, there is an ever growing number of homeless, where whoever is elected as the so called leader of the state deliberately avoids taking any real action to address this epidemic.

Tackling homelessness is realistically 'bad for business', an action that is considered a liability for any government, as this does not involve huge profits for the state budget as do fines for example or (the deliberately) hyperinflated housing market. 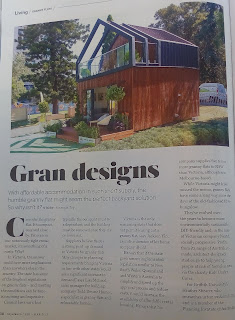 Posted by AuCorp at 1:31 PM No comments: