The child rapist who escaped a Victorian compound for sex offenders has been apprehended by police.

The man, who cannot be identified, fled the building in the early hours of Wednesday morning despite wearing an electronic monitoring bracelet.

He was arrested without incident by two police officers about 11.05am this morning outside a Landsborough hotel, about 20km from the Ararat compound in Victoria's southwest.

The criminal had been living in the centre since being released from nearby Ararat Jail after serving nine years for the rape of a teenage girl during a home invasion.

The compound housed 23 of the state's worst sex offenders.

A public outcry had earlier swept the state after authorities revealed that he had disappeared because his ankle bracelet did not contain a GPS.

The device alerted police that he had fled the compound at 1.50am on Wednesday morning — but could not provide any details on where he had gone.

There was also a public backlash over a court suppression order that banned name or picture being published — despite being a criminal on the loose.

This shows how the government is NOT SERIOUS about the protection of it's TAX PAYERS.

YOU CAN RAPE CHILDREN and NOT EVEN GO TO JAIL.

Posted by AuCorp at 1:05 PM No comments:

A British man has been fined $108 for blowing his nose while stuck in traffic.

Michael Mancini said he was in disbelief when police pulled him over in October 2009 and alleged he had not been in control of his vehicle when he wiped his nose.

He was subsequently fined $108 and lost three points on his driving licence, Sky News reports.

"I genuinely thought they were joking," Mr Mancini was quoted as saying.

Mr Mancini has refused to pay the penalty, with his solicitors writing to prosecutors earlier this month saying he was in charge of the vehicle because the handbrake was on.

Prosecutors replied saying if the fine was not paid the case would be taken to court.

Mr Mancini said he "intends on taking this all the way to the court".

Another example of testing the boundaries for the creating of a SLAVE NATION.

Anglo (U.K, U.S and Australia) test beds are established and new ways are 'tested' on how the public react and new laws brought in, which ultimately enslave the general public, and NOT the criminal element.

In Victoria, Australia, a CHILD SEX OFFENDER was given an 'ankle bracetlet', as he was on 'home detention' which was only valid for boundaries near the prison.

The offender escaped, and cannot be tracked, as the bracelet is NOT GPS equipped.

The government DELIBERATLEY lets a SEX OFFENDER walk free, whislt fining someone who blows their nose in a car.

Posted by AuCorp at 9:20 AM No comments:

A father whose son committed suicide by jumping from Melbourne's West Gate Bridge will sue the Victorian government which he says failed to install barriers which could have prevented the death.

Ali Halkic is angry the Victorian government will spend $20 million on colourful lights for the bridge but failed to take heed of recommendations by two coroners to install suicide barriers.

Mr Halkic's son Allem took his life last February after he was allegedly bullied on a social networking website.

His death came just days after the death of four-year-old Darcey Freeman, who was allegedly thrown from the bridge by her father Arthur Phillip Freeman.

Mr Halkic said that in 2004 and 2005 separate coroner's rulings recommended suicide barriers be installed but nothing was done.

He said his son would not have died had barriers been installed.

"Why did it take the loss of my son to incorporate immediate action," Mr Halkic said.

"The majority of suicides are impulsive. We are talking about the ones that could have been prevented and the opportunity taken away from them."

He said he was sickened when he heard $20 million would be spent on lights.

"When I heard him (Victorian Premier John Brumby) gloating about it, they don't take families into consideration that have lost family on the West Gate," Mr Halkic said.

"I don't want to see the bridge illuminated to remind me of my son, where he died, every single day of my life."

He wants the state government to acknowledge the barriers are working and offer medical and psychological support to families.

Already two other families are joining the legal action and Mr Halkic hopes more will follow.

Mr Brumby said the government acted on the advice of experts which was to install the barriers when it was doing a major upgrade of the bridge.

"Any suicide, any loss of life is a tragedy and I feel very deeply for the families concerned," he said on Thursday.

"But I think in terms of the steps we're taking ... (the permanent barriers on the West Gate) are positive steps and they are steps that are designed to save lives in the future."

The government could NOT CARE less about the death of an individual. To them it's just another statstic.

What is important is to give money $ to $ mates for unnecessary contract work i.e installation of lights on the Westage bridge.

Once you rely on the government for the welfare of your child, they are earmakred for the position of CANON FODDER.

At one point in time there was one death daily from the top of the Westage Bridge,
BUT there is a general media moratorium on this subject.

Australia has the least affordable houses in the world, according to a ranking of international housing markets.

From a total of 23 Australian regions included in Demographia's Sixth International Housing Affordability Survey, 22 were labelled severely unaffordable and Australia scored the worst housing affordability rating in the world, followed by Canada.

Demographia calculated the ratings by diving median house prices by annual median household income and named Vancouver as the least affordable market in the world.

Sydney was ranked second, with the Sunshine Coast, Darwin and the Gold Coast rounding out the top five.

Melbourne and Wollongong also made the top ten, coming in at eigth and tenth respectively.

In Sydney, nearly 57 percent of the average income is needed to pay the mortgage on the average house, compared to just 13.4 percent in Dallas, Texas, one of the most affordable major city housing markets in the world.

Experts said housing affordability is being eroded by a lack of supply.

"Residential land release in Sydney has been reduced from an historic average of 10,000 lots per year to less than 2,000 in 2007," said Dr Tony Recsei in the preface to Demographia’s report.

"In the face of the scarcity resulting from such a miserly allotment it is unsurprising that the land component of the price of a dwelling has increased from 30 percent to 70 percent. The result has been a cost increase of some three times what it was a mere ten years ago."

Demograophia added that land release and planning issues are making the situation worse.

"In Australia, there is consensus in both the government and the private sector that there is a severe housing crisis, with rampant unaffordability and a housing shortage," the report said.

"It takes from 6.25 to 14.5 years to convert urban fringe land into new houses, which compares to less than 1.5 years before urban consolidation, and which remains the case in the 'demand-driven' (more responsive) markets in the United States."

Demographia urged governments to free up land use rules in order to ease affordability problems without causing a housing market crash.

The financiers take strict control of 'market trends' then regulate banking in such a manner that housing become less affordable for the masses.

This is politics on a global scale, and not just at a domestic level.

Posted by AuCorp at 1:43 PM No comments: 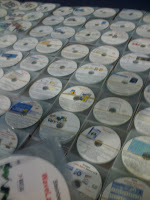 The masses are apparently told that copying of software is illegal.

In this form a name has been given called piracy, and criminal acts have been loosely establish to punish individuals who 'pirate' software from large 'multinationals'.

Computer Swap meets are great places for obtaining 'bargains' of all sorts relating to Information Technology.

Another thing that can be obtained from them is
PIRATED SOFTWARE.

There are a number of vendors that openly sell pirated software, of which the authorities are no doubt aware of, and 'turn' a blind eye.

No doubt that maybe some of these people may be on government welfare claiming unemployment benefits (i.e. claiming NO INCOME) yet on the weekends sell pirated disks for $10 to $30 a pop.