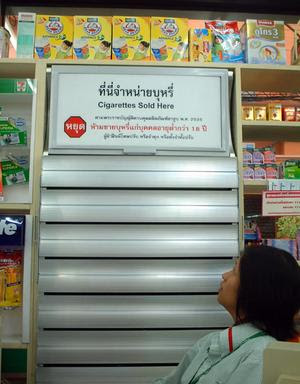 In an attempt to be perceived as taking some sort of action, the state governments have thought of a hair brained idea of hiding cigarettes behind roller shutters in order to dissuade the people from buying the cigarettes.

It is well known within many health and political circles, that cigarettes contain additive substances that are put into cigarettes by the manufacturer's in order to hook the smoker.

In the papers put forward, for this implementation of law that cigarettes must be out of sight, there has been no indication of the figure of reduction that cigarettes will be sold by.

The government takes in approximately $5 billion dollars annually from taxes obtain from the sales of cigarettes.

The government must be seen as if it is taking action for the benefit of the population.

Figures have recently been obtained from a major supermarket brand, newsagents across the state and milk bars indicate the there has been no reduction in sales after the mandatory hiding of cigarettes.

This clearly shows another failure, that is kept away from the public eye.

Victoria's controversial desalination plant is a haven for fraudulent transactions, price fixing, and a budget blowout due to money for mates deals.

The government has had on its agenda to produce a water 'money factory' at the expense of the general populous ever since the 'privitisation' of the water industry.

In order to make this a reality, no water storage areas have been built in the last generation, even though there has been a 30% increase in Melbourne's population.

The mass media has recently reported that there have been corrupt deals within the government with respect to fraud :

but there has been no word at the corruption at the newly being built desalination plant in Victoria's east.

In money for mates deals 'contracted' cleaners are sitting on $130,000 standing around doing nothing.

There are kickbacks given to the business organisers with large sums of money exchanging hands, out of the view of the public eye.

The names of these business movers and shakers will not be mentioned as this will not only endanger the source of the information, but also there will be denial which will result in the whistle blower being put at risk their job, career and family.

Naturally any hint of an inquiry will be fruitless, as any evidence of corruption will not surface to court, as this is the norm with multi billion dollar deals.

A police officer in Victoria has been charged with drug and firearms offences after an internal investigation.

Following the Ethical Standards Department investigation, the leading senior constable from northern Victoria has been charged and suspended from duty without pay.

"As the matter is now before the courts it would not be appropriate to make any further comment," a statement from police said.

A Victoria Police spokeswoman would not say at which police station the officer was based.

Another example of how the law will protect corrupt police.

When civilians are convicted of the same crimes, their names are published, but not when it comes to police.

Transparency is not for everyone.

This is only the tip of the iceberg, as certain police are involved in the criminal activities of Melbourne's crime gangs, but then again this is NOT reported by the mass media, and is kept under tight wraps.