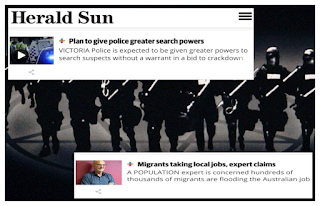 The actions of people in government have an effect on society, an effect that is planned by those people in 'power'.


Let's have a look at two burgeoning 'issues';

1). The people in government have imported scum into the country, scum that 'terrorises' the good people of Australia.

As a result the a$$holes in government then say that police need MORE powers to search 'suspects' (your frail 95 year old great grandmother can be a 'suspect' according to 'law') WITHOUT warrants making the state of Victoria even MORE of a POLICE STATE.

As if no warrants existing from Victoria's Sheriff's Office is NOT enough !!! !!!

WHATEVER the official unemployment rate is coming from the offices of criminals in power you can be assured it's BS (i.e. under inflated).

2). The people in power import cheap slave labour (as they have done since 1788), which in turn takes jobs away from 'Australians' in effect having a detrimental effect on family and society as a whole.

Corporate scum like Telstra who lay off 1400 Australian workers only to replace them with cheap overseas labour that works for a bowl of rice per week or something similar.

The actions of the people in power are NOT by accident or without thought.

DO NOT PANIC though, everything is going according to plan.

The people in 'gov' REALLY f_cking hate their slave population !!!
Posted by AuCorp at 9:22 AM No comments:

Turnbull tackles encryption and OWNS it like a biatch

The untouchable sociopathic white collar criminals in this machine called the 'Australian Government' are at it again. 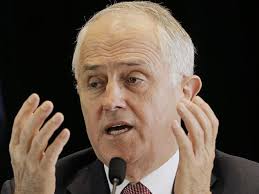 With every action regarding a new law, Australia's good people are being oppressed more and more with literally zero rights to privacy, where every man / woman / son / daughter who is in possession of a mobile phone is monitored by the 'authorities' (read corporation conglomerate) today under the pretext of 'terrorism'.

It would come as no surprise that the law makers in this penal colony would put a law trough that owning an encrypted device is an act of 'terrorism'.

Apparently 'terrorists' use encrypted methods of  communication between each other.

'Terrorists' use automobiles / highways to get to their destination. 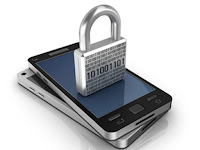 BAN all automobiles and lock up the people under Martial Law like they did officially in the first 40 years of colonialisation of this land.

The WHOLE point of encryption is so that the a$$holes in the corporation conglomerate called the 'government' do NOT access YOUR private and confidential communication.

So let's use the "nothing to hide, nothing to fear' motto?

Give US your communications,  Turdball !!!

George Brandis another criminal in office.

The people have already had their mobile phone's security compromised from (deliberate) security holes in the GSM communications protocols from the inception of the technology.

The Turnbull government will look to change laws in order to help authorities decrypt messages.

THE increased use of encrypted messaging by terrorist networks has prompted the Turnbull government to reportedly look at changing laws to force telecommunications and technology firms to help authorities decrypt suspect messages.

Fairfax Media reports that Attorney-General George Brandis said the government will not pursue the controversial “backdoor” access option by forcing firms to plant flaws in their encryption software that would allow it to be cracked by police or security agencies.

Senator Brandis also said the mechanisms for warrant exchanges between Australian agencies and counterparts in the US and other partners were “more limited than they should be”.

In mid-2013, less than 3 per cent of counter-terrorism investigations intercepted communications that were encrypted. Today that figure was more than 40 per cent, Senator Brandis said.