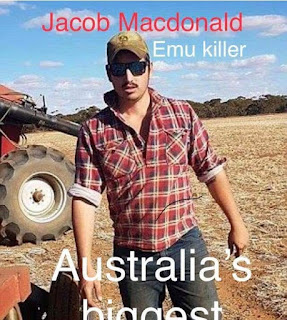 Even though UK's dailymail published the details of the man who deliberately ran over 10 emus with his 4WD vehicle as 20 year old Jacob Macdonald, a police officer's son, the Australian mainstream media has not mentioned his name as an example by adelaidenow.com.au publication stating:

“We ask that people do not ‘name and shame’ alleged suspects on social media. This both compromises potential prosecutions, as well as risks incorrectly identifying innocent people.”

Getting it wrong on identifying alleged criminals can have devastating consequences for those who have been incorrectly identified, but there is another aspect to criminal law that many may not be aware of.

There are many court cases from the state's Supreme Courts to the High Court of Australia which are of significance to the community that hold powerful remedies with regards to the unlawful actions of the authorities in Australia.

There are also court cases that are sealed, where they are not available to the general population, where there is no reference to their existence in online resources.

In some cases this is done to allegedly protect victims, or more specifically the criminals, but in other circumstances people have put together documentation to the courts of how the authorities have subverted the justice system, with documentation that is undeniable, exposing the corruption of the Australian courts or those in government.

MANY should be aware that the system takes care of its own, where one of the 'own' is the state's police force.

Apparently the general population is told that every person is equal in the eyes of the law, but to many the reality is quite different.

MANY police officers get away with criminal offences with either a slap on the wrist or a paid 'vacation' (suspension with pay), whereas if a person from the general population would be charged with the same criminal offence, the outcome is quite different.

By drawing attention to the fact that the person is the son of a police officer, would be of benefit to the community to indicate that 'justice is served' equally in the eyes of the law.

In Australia MANY judicial registrars / magistrates / judges 'err' at law, and the more people witness this the better it is for the accused or rather the person harmed by the law.

There is plenty of fraud within the archives that people in government do not want the general population to be aware of where one set of documents comes to mind that being the secret letters regarding Whitlam's dismissal in 1975,  between the Australia governor general, John Kerr and the Queen.

Nothing to hide nothing to fear, right?

Reminder: Australia is a nanny state.

Everyone should be equal under the Law, we already know of the Catholic Church believing that they are above the Law, which is wrong, God had nothing to do with our Law so 'He' also can not judge anyone who committed a crime under the Criminal Law! Mowing down TEN defenseless Emu's only because 'HE' McDonald could, for him it was Fun, is a Crime which needs to be punished, a Son of a Police Officer should know better, therefore the Punishment needs to be more severe to send a message to all Siblings, regardless who your Parents are, "YOU WILL BE PUNISHED"!