How much does a DVD weigh? 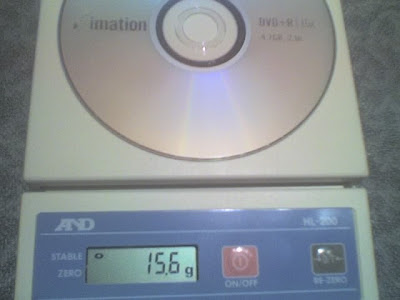 For those who were itching for an answer: 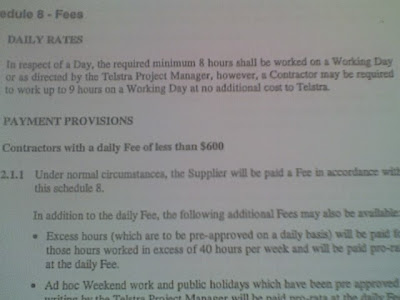 Telstra has organised contracts in such a manner as NOT to PAY for the HOURS WORKED.

In simple laymans terms, fraud and slavery come into mind.

As stipulated in the agreement:

In respect of a Day, the required minimum 8 hours shall be worked on a Working Day or as directed by the Telstra Project Manager, however, a Contractor may be required to work up to 9 hours on a Working Day at no extra cost to Telstra.

Telstra's standard Working Day is in fact according to H.R. documentation 7.5hrs (being a Government Institution). The contracts that Telstra arranges to work 8 hrs are fraudulent, and in breach of Workers Rights.

Therefore Telstra INSTRUCTS workers to work from 37.5 hrs - 45 hrs (7.5 hrs i.e. AN ENTIRE WORKING DAY for FREE ). Any extra time that is spent on a project Telstra charges for, at an approximate rate of 300 to 500% above the workers rate.

Telstra is therefore defrauding the worker to their right to salary.

The laws are set up in such a manner that these kinds of contracts are supported by all parties concerned, Telstra, the agencies involved.

It is a farce that the government is setting up Industrial Relations laws that are fair, as proof is that these contracts would NOT exist today.

In general when the workers are defrauded a significant amount, there is usually no repercussions, especially if owned / partially owned by the government, as NO government is willing to reduce its financial intake, even if it's through fraud.

The government has been advertising that you (as a worker) have a right to NEGOTIATE your contract. This is plain and simply a LIE.

If you do NOT agree to these conditions you will NOT WORK!

Counter terrorism police have removed a man from a Qantas plane for refusing to shut down his laptop computer during a landing in Sydney.

They dealt with the incident at Sydney Airport on Thursday because they were the closest officers available at the time, the Australian Federal Police (AFP) said.

The two officers identified themselves to the businessman as "counter terrorist first response" when they boarded Qantas flight QF418 from Melbourne shortly after it arrived at Sydney about 10.20am (AEST) Thursday.

An AFP spokeswoman said a 35-year-old Melbourne man allegedly refused to comply with an order from the captain of the Qantas plane to shut down his laptop computer.

Laptops and other electronic equipment can interfere with the aircraft's controls.

"The direction related to the shutting down of the man's laptop for landing," the spokesman said.

She said the man was released without charge pending legal advice and assessment of further evidence.

A Qantas spokesman said the passenger had "failed to comply with a directive from the captain".

The use of words that create fear into the minds of the general populous is a great tactic.
This is just another subliminal message to justify the existence of law enforcement against us.

The first line should should have been written like this :

Ayehole removed from plane for not listening !!!
Posted by AuCorp at 6:19 PM No comments: