Australia has a new elite squad of criminals 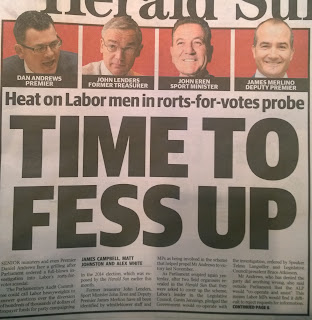 These guys are worse.

They promote slave labour, racism, the dis-assembly of the family unit, warmongering for profit.

They steal 'your' money from your bank accounts, threaten you with harm, intimidation with firearms by their side.

The unlawful 'star chamber' (one man jury) has sent many a man to jail for victimless 'crimes'.

So who are these scumbags?

Why they're people who are part of the executive, you know polticians, MPs, the sheriff, Australia's finest - the judicature, with a helping hand(gun) of the police 'force'.

Take for example the current crims in office Victoria's 'premier' Daniel Andrews who is up for rorting votes, and another a$$hole an MP by the name of Bill Shorten up for fraud.

So how will the 'law' handle these crims?

In the same manner it handles all the other ones...

NOT GUILTY AND NOT A SINGLE DAY IN JAIL!

The story would no doubt be different if they were NOT part of the 'brotherhood'.

Australian politics full of wankers but are they worse than tosser Geelong mayor Darryn Lyons?

This absolute moron has really go to go... 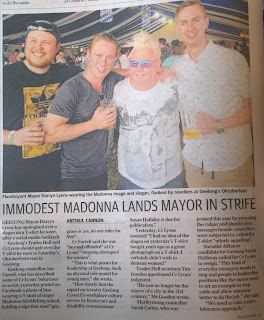 Looks like any tw@t can be be involved in politics.

How to communicate with police

In Australia the police are a wired mob.

Some members of the 'force' tell you that they are the law, usually shouting it down at you.

This is plain and simply a lie / deliberately false information, as the 'police' are part of the executive.

Are the police the same people as the ones at the time of Australia's Federation in 1901?

Where is there oath of allegiance to?

Aren't they part of the corporation conglomerate commonly referred to as the government, with their very own ABN (Australian Business Number)?

How does one communicate with them?

Let's start of with the basics.

- Similarly a police person is required to provide you with their full name, their registered number, police station they work from, also to produce their badge should you require this to be seen if you have doubts that the person is actually an official police officer.

Many people have stated privately and it has been mentioned in the corporate media that there is no such thing as 'justice' when it comes to certain crimes committed against the general populous.

Many 'lay' people do not comprehend law or this machine called the 'justice system'.

In a nutshell the 'justice system' is a business, and the courts are an administrative place for business/trade/commerce.

So we can use a catch phrase (coined by CorpAu - for royalty free use) Justice - Is Just Business.

when you the 'citizen' (person residing in a republic) or civilian (someone who is not engaged in war) or Queen's subject (a person living in Australia?) require information from the police, you are required to complete an application form which requires a fee, meaning a commercial transaction takes place.

When the police department require information from another business, e.g. a telecommunications company like Telstra, the police pay the telco for that information.

Information is a commodity/resource where is it traded or sold.

Many a legal person may say how to talk to police, where the answer is 'you don't'.

In Australia you are under no legal obligation to say anything to police other than the basics as described above.

Under contract/corporate law you have every right to obtain 'money' (read corporate promissory notes) from the police department for your services.

For those who comprehend the use of boxes, put this information to the side for the purpose of this document.