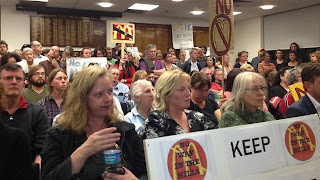 UPDATE 1.20pm: PROTESTERS have threatened to use militant tactics in their fight against a McDonald's in Tecoma.

Some protesters have vowed to chain themselves to the site to prevent the fast-food giant from building the restaurant in Burwood Highway, after Yarra Ranges Council last night rejected pleas to take the battle to the Supreme Court.
Tecoma resident and protester Natalie Walker today said some protesters would take the fight to the next level and use more militant tactics.
"Some of the group believe the law is an artificial constraint put upon them and will chain ourselves to bulldozers and resist police," Ms Walker said on the Facebook group No Maccas in the Hills.
But Ms Walker said many of the group protesting at the site were committed to non-violent methods of stopping the fast food giant coming to the town.

Hundreds of residents screamed "shame, shame" after Yarra Ranges Council last night rejected their pleas to go to the Supreme Court to fight against a McDonald's being built in the town.
VCAT approved the proposed seven-day, 24-hour fast food outlet in the town on October 10.

Lyster ward councillor Samantha Dunn put forward an urgent motion at the meeting for the council to take the VCAT decision to the Supreme Court in a last-ditch effort to stop the restaurant.

Angry residents shouted down the councillors and called them "gutless'', and worse, for not supporting them in stopping the fast food giant coming to the community of about 2100 residents.

The main reasons put forward for rejecting the community's plea was that the council was in caretaker mode and that a Supreme Court appeal would not be an appropriate use of ratepayers' money.

Walling ward councillor Len Cox said the fight could cost from $250,000 up to $1 million.

Chirnside ward councillor Richard Higgins said he could not support "writing a blank cheque'' for the council to fight the issue.

"McDonald's will throw every single cent at it. If we lose we could be up for millions,'' Cr Higgins said.

She apologised to the residents and said "I'm sorry, I did all that I could''.


The headline mentioned by the corporate media could not be further from the truth.

Gutless not, but rather subservient to the corporate giant's despite the wishes of the population.

If the desire of the majority is not to have McDonald's in their town, the council must respect this wish.

Residents would not be aware of this but, they have the right to sue to council.

McDonald's sell products that are unhealthy for human consumption, as they are carcinogenic, cause heart disease, obesity, addiction and various other illnesses.