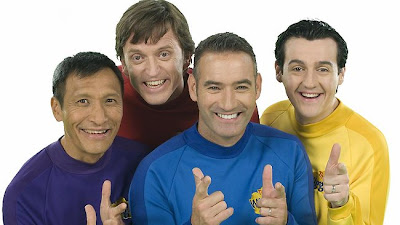 The emergency dash follows diagnoses of a heart condition after weeks of feeling unwell.

The 57-year-old has developed arrhythmia, a condition where the heart beats too fast, too slow or irregularly, and was being fitted with a pacemaker.

He was expected to make a full recovery following what was urgent but routine surgery.

"He is fit and in very good health, so we expect him to make a quick and full recovery.''

''Jeff has been standing next to me on stage for the last 20 years and he has never, ever missed a show,'' he said.

''We all love Jeff. He's like a brother to me, and that affection is shared by families and children all around the world.''

Millions of children across the world have shouted the phrase ''Wake up, Jeff!'' as his on stage persona routinely falls asleep.

Just last November, Fatt took to the high trapeze as part of a circus-themed Wiggles Greatest Hits Tour around Australia.

''Doing this show is keeping me fit,'' Fatt said at the time.

''There will come a time when we have to hand over to younger Wiggles, but not while we are able to do the shows.''

In January last year, Fatt was honoured along with the three other other original Wiggles - Murray Cook, Anthony Field and Greg Page - with an Order of Australia for services to children's entertainment and the arts.

The trio, who began writing children's songs as one of their music projects while studying at Macquarie University, enlisted the assistance of Fatt in 1991 and The Wiggles were born.

When the group were recording their first album 20 years ago, Field rang his old mate to ask him to help out with keyboards.

Fatt, who was renovating his home at the time, replied ''Sure, but how long will it take?''

The Wiggles have since become come a global phenomenon and gone on to sell more than 23 million DVDs and seven million CDs worldwide.

Definitely all the best wishes for Jeff.

BUT, there is no mention of his partner - Australia's music rock 'guru' Ian 'Molly' Meldrum.

It is well known within the industry that "Molly's" partner is Jeff, but there is once again a media taboo on mentioning that he is his partner.

It should be of no consequence to anyone, in this politically correct world, whether one is gay, lesbian or heterosexual, of pale or coloured skin or even an illegal alien.

There is no mention of Molly Meldrum because they are NOT dating and Jeff is not gay. (Why does everyone assume because an older man is single that he is automatically gay? In Jeff's case, he is just extremely shy.) Everyone says he is/was with Molly Meldrum because Meldrum's actual life partner, Rui, who he has been with for years, looks somewhat similar to Jeff. This rumour about Jeff being with Meldrum started all because people can distinguish between two non-white people. Unbelievable!

JL
You need to get your facts right before aprouting off!
I don't give a rat's arse who's seeing who, however MM & JF have been partners since 2008 at t

so who is the pillow biter then ?