You don’t need a government propaganda machine from some ‘dodgy’ eastern block country do you?

One would not want to ask too many more questions as one could be labelled a ‘conspiracy theorist’ or ‘tin foil’ hatter maybe even worthy of a ‘terrorist’ investigation with the new BS metadata retention laws.

There are more questions than you can poke a USB stick at that need to be answered but alas we digress...

So, the plebs may want to know, that we have a ‘Queen of Australia’? 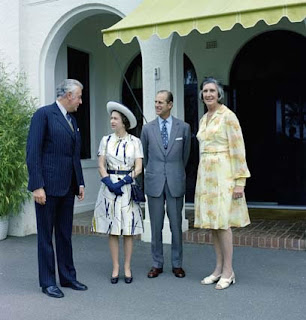 Who or what is a ‘Queen of Australia’?

Well, according to the Fairfax media empire in an article from the 3rd of June 2013, Elizabeth II celebrated 60 years as the ‘Queen of Australia’.

So simple maths will tell you that Elizabeth II became Queen of Australia in 1953.

“That’s great!” the uneducated pleb or even educated lawyer might say.

According to law, even which it’s then debatable, the current British monarch is (Her Most Excellent Majesty) Queen Elizabeth the Second, which IS different from Queen Elizabeth II.

On this day 19th of October 1973 (42 years ago), when the British monarch was visiting the colony called Australia (see illustration), an act was passed called the Royal Style and Titles Act 1973.

Note (in the illustration below) the alleged signature of the Queen is on TOP of the document, i.e. not signed according to law, therefore making the Act INVALID. 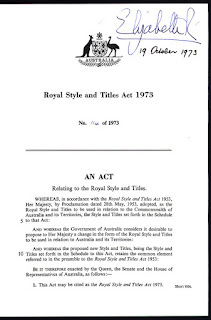 It is from this Act that the title of the Queen of Australia is derived.

The Royal Style and Titles Act 1953 is not valid for the same reasons, and certainly not under the corporate seal of the 'kangaroo and emu'.... Well it might be valid of you go to a 'kangaroo court'.

The Royal Style and Titles Act has been passed unlawfully, and also this is done in breach of the ‘Australian Constitution’.

Any person from the judicature states to you that they work for the ‘Queen of Australia’ are up for the charge of treason.

You can read the entire (false information / propaganda?) article from The Age at:

Posted by AuCorp at 5:13 PM No comments: